A tribute to the Leningrad siege survivors 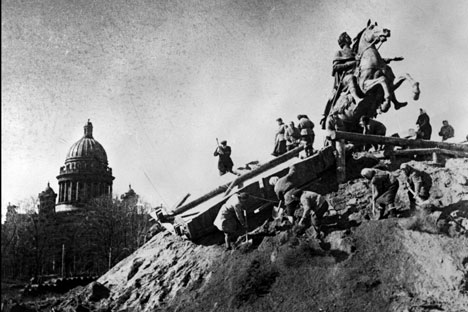 The siege of Leningrad started on 8 September 1941, and was finally lifted on 27 January 1944. Source: RIA Novosti

The U.S. Ambassador to Russia reflects on the importance of memory as St. Petersburg commemorates the victims of the 1941-1944 siege.

On the 70th anniversary of the end of the Siege of Leningrad, I would like to pay tribute to the brave survivors who defended the city, offer my heartfelt condolences to those who lost loved and honor the memories of those who perished during the blockade.

I also would like to congratulate the succeeding generations of St. Petersburg citizens who have worked in the decades since the siege to preserve and extend the city’s outstanding cultural heritage and help it become a vibrant center of the arts and commerce that is recognized worldwide. I have visited your city many times and just love the place.  Last summer, a visit to St. Petersburg was the highlight of the trip to Russia taken by my mother, father, two brothers sister.

Leningrad was the first non-American city in which I lived.  I arrived in your magnificent city in the summer of 1983 as an exchange student, eager to learn the Russian language but also excited to learn more about the history of Russia and the Soviet Union, including World War II.

That summer, I quickly realized that I had much to learn about the true sacrifice that Leningraders made to withstand our common enemy.  I vividly remember visiting the Monument to the Heroic Defenders of Leningrad and the somber gravesites of the Piskarivoskoye Memorial Ceremony, which seemed to stretch forever.  To this day, I can still hear in my head the somber music that played at the gravesites.

Your city’s resistance to the blockade showed the bravery and endurance of the Russian people in overcoming a massive military assault and severe food shortages that led to starvation. As St. Petersburg celebrates that crucial victory over Nazi Germany’s Army, we join in mourning for those who perished and admiring those who survived and rebuilt the city. Among the U.S. officials who plan to attend the ceremony is Admiral Bruce Clingan, commander of U.S. Naval Forces in Europe and Africa.

Not just the people of Russia, by the entire owe a huge debt to those in Leningrad who first resisted and later repelled the Nazis. Without your victory in Leningrad and elsewhere during World War II, the course of human history would have been radically different. Thank you.

When poetry aids in survival

In search of unknown soldiers

As the number of survivors who endured the Siege of Leningrad dwindles with each anniversary, it is important for succeeding generations to commemorate those terrible 900 days from 1941-44 and to consider what that feat of endurance still means to Russia today, seven decades later.

In my country, students of Russian history appreciate the dramatic story of resistance to the siege, told vividly in author Harrison Salisbury’s classic book, 900 Days, and analyzed in many other studies – including a new book that focuses on Dmitri Shostakovich’s Seventh Symphony, which was first performed in the besieged city in August 1942.

As both an ambassador and a professor, I wish more Americans knew more about the tragic but heroic chapter in your city’s history. I do what I can to help educate Americans, and I am proud that I have joined my two sons in visiting your city’s excellent history museums.

Americans take pride in our efforts to provide equipment to Russia’s military during World War II under the Lend-Lease program, under which the Allies helped the Red Army battle the Nazi invaders. Between 1941 and 1945, the United States sent 18 million tons of material to the Soviet Union – including more than 400,000 jeeps and trucks, 12,000 armored vehicles (including 7,000 tanks), 11,500 aircraft, and nearly 2 million tons of food.  The program – and the Alliance in general – was a shining example of great powers uniting to defeat a common enemy.

It’s an example in history of what Russia and the United States can achieve if we work in tandem on issues of international importance.  The Obama administration has worked closely with your government to tackle a range of common challenges and nurture common interests. Most recently, the admirable efforts of U.S. Secretary of State John Kerry and Russian Federation Foreign Minister Sergey Lavrov that have allowed us to reach agreement on such important issues as eliminating chemical weapons in Syria and curbing Iran’s development of nuclear weapons.

In that spirit of cooperation, I congratulate the people of St. Petersburg on this important anniversary, which still plays a seminal role in your great city’s history and identity.