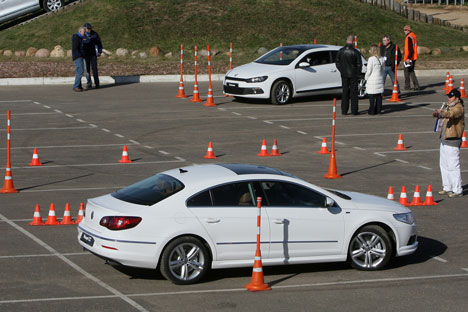 Think waiting at your local DMV is tough? Try getting a driver’s license in Russia.

Recently I had the honor or becoming a car owner. But before I could drive the car, I had to get a license. This is not so easy in Russia.

First, you have to sign up for classes at a driving school. The Wonders of the Russian Bureaucracy begin already at this stage. Of course you have to show your internal passport (which is not a passport for travel abroad, but just like a form of identification giving your name, date of birth, address, photo and other information). You also have to bring a photo and a medical health form specifically for the traffic police with notes from several doctors: an ophthalmologist, a neurologist, a mental health specialist and others who agree that you are fit to learn to drive. However, there is a way around this. At the driving school, you have the opportunity to buy this medical health form for about 500 rubles ($15) without going to visit any of the doctors.

The price of the driving lessons differs from school to school, but on average a course costs about 20,000-25,000 rubles (between $800-$900). This price includes classroom lessons and lessons behind the wheel: from 15 to 25 lessons, depending on the student’s request and the perception of the instructor. For an additional fee, you can practice with the instructor as often as you can fit lessons into your schedule.

Classroom lessons classes consist of a detailed examination of the rules of the road. Passing a test on this information is the first stage in the examination that conducted by the traffic police for new drivers. The test consists of 20 multiple-choice questions conducted on a computer. You have 20 minutes to pass the test.

You can start taking driving classes at the same time you start classroom lessons or after you finish these. Traditionally, Russian driving exams were conducted in cars with manual transmissions. Fairly recently, a law was passed saying that you have the right to take the driving exam in a car with an automatic transmission, but in that case, your license will note that you do not have the right to drive a car with a manual transmission.

The first stage of driving classes – and subsequently the first stage of the exam – takes place in a specially equipped zone where drivers must perform a series of exercises without knocking over any cones. And there is a special hill that the driver must ascend without rolling back and without going too far.

The second stage of the driving lessons (as well as the second stage of the exam) is driving around the city. When this stage of lessons start depends on the instructor: some of them take their students "in the city" during the third class, when the student may not even really know how to property start and stop the car. Other teachers require their students to stay in the controlled zone until all the exercises have become automatic.

Then the time comes to take the test in front of a traffic police officer. There are only a few places in the city where driving tests are conducted, so there are always huge crowds of people. On the day you take your final exam, it is necessary to arrive at the exam center about 8am and be prepared to wait all day. I arrive at 8am, took the theory test at 10am and was among the first to be ready to take the actual driving portion of the test.

However, the traffic police take lunch from 2-3pm and everyone in the center is then thrown into the street to wait until the lunch period is over.

So, at 12pm, an announcement was made that the next group of drivers would be tested only after lunch. Most people then left the center, to find something to do until 3pm, but I decided to wait there, and this proved to be a good decision. To my surprise, at 1pm, I was called along with 10 other people to take the driving test in the practice zone. I quickly got out my phone and called the names I recognized. I felt bad for the others, because it is not certain that you will be called for the next group if you miss your time. But I was lucky.

I got into the car and began the exam. It is very difficult to adjust quickly to an unfamiliar car, unfamiliar pedals, wheel size and instruments, but I successfully passed the exercises. I did stall the car on the hill climb, but the car did not roll backwards, so I was given a second chance, and that time, I passed.

For the city part of the test, I was called at 4pm. But then I waited in the area where drivers are assigned to cars for another hour and a half. After driving my route fairly well and stopping in the parking lot, I was told by a very angry cop that I did not pass the exam because at one point I did not switch on the turn indicators.

After wasting nearly 10 hours in the driving exam center, I didn’t even have enough strength to be upset. I was assigned a time to try the city driving test again a week later.

A week later, I arrived at the center at 7:40 am – before it even opened – but the line was so long I wasn’t even in the first 20. I had to wait three and a half hours to be called, then another hour standing in the cold waiting to be assigned a car. It was -5 Celsius (23 Farenheit) and as it was December, I was lucky it wasn’t -15 Celsius (5 Farenheit). Nevertheless, when I finally got in a car, my legs and feet were so numb that I barely felt the pedals. But this time everything went well and I successfully passed the exam.

Despite the hardships, the ordeal was worth it. Now I get to go everywhere by car, flying along like the breeze – until I get stuck in a Moscow traffic jam.