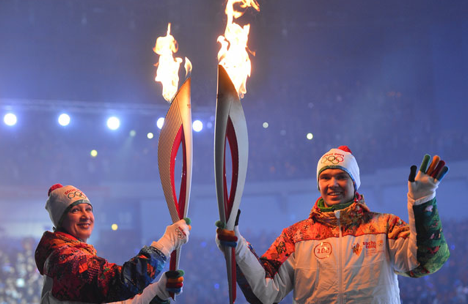 The Western crusade against the Winter Olympics host and its leader, also joined by home-grown proponents of so-called liberal values opposing the Kremlin is unlikely to influence the majority of the global audience, who will be able to have a glimpse of resurgent Russia.

'Soch' in Hindi means thinking, and my thoughts are about Sochi, the Black Sea resort and venue of the XXII Winter Olympics, which I visited twice when it was gearing to host the games.

The Winter Olympics 2014 are beginning on February 7 in Russia's Black Sea resort of Sochi and a lot has been said and written about them, including the corruption, security risks from Islamist terror outfits and waste of public money.

Most of the Western leaders including US President Barack Obama are staying away from the opening ceremony, obviously to please their 'Rainbow' electorates, fuming over Vladimir Putin's alleged crackdown on the LGBT community and human rights in his country. In spite of that, the Sochi Olympics should be a game changer in comprehending today's Russia, which has overcome the decline and trauma of the Soviet collapse. The world will see that Russia is not an ailing nation of vodka-guzzling brute, 'uncivilised barbarians', as the biased media spoon-feeds general public, especially in the Anglo-Saxon world including India.

Ever since the selection of Sochi as the venue of 2014 Winter Games in Guatemala City in July, 2007, I have been keeping my fingers crossed, because of the past case of 1980 Olympics in Moscow, which were boycotted en mass by the US and its allies including Pakistan over the Soviet invasion of Afghanistan.

The biggest boycott threat to Sochi Winter Olympics emerged in August 2008, when Russia sent its forces in the breakaway province of neighbouring Georgia, a US ally in the Caucasus and NATO aspirant. The four-day Caucasus war unleashed by the then Georgian President Michel Saakashvili's botched attempt to recapture South Ossetia by sheer military force had made the chances of the Sochi Winter Olympics coming under the cloud of Western boycotts. President Saakashvili had urged his Western mentors to do so to punish assertive Russia. However, since then there is a different government in Georgia, which is seeking to patch up with Moscow and has decided to send its national squad to participate in Sochi.

Frankly speaking, nothing much has changed in the West's approach to Russia, even after the pro-Western elite in the Soviet Union demolished the USSR to become the part of the 'civilised' (Western) world. Today's Russia, or Putin's Russia, is not the replica of the USSR. Russians freely travel all over the world, not only rich, but middle class professionals also own houses and other assets in the US and Western Europe, thanks to economic changes under President Putin.

Unlike in the USSR, the Russians have free access to internet and the Russian print and web-based media is essentially free, even the highly state controlled electronic media is mostly dominated by the pro-West liberals and is pluralistic.

On this backdrop, the Western crusade against the Sochi Winter Olympics host and its leader, also joined by home-grown proponents of Western liberal values opposing the Kremlin is unlikely to influence the majority of the global audience, who will be able to have a glimpse of resurgent Russia.

As a respected Indian daily, The Hindu noted the “vicious campaign to boycott the Sochi Olympics was unleashed in the West after Russia last year passed a law banning homosexual propaganda among minors.”

The Western media has also termed the Sochi Olympics as the most expensive in the history of the Games and quoting Russian Kremlin-baiters have the put the cost at $50 billion, half of which was allegedly stolen in kickbacks. In an interview to CNN, Russian Prime Minister Dmitry Medvedev said the actual cost of Olympic venues, which were built on the basis of public-private partnership, was $6.4 billion.

8 things to watch out for in Sochi

In all $50 billion was spent on the infrastructural development of the entire Sochi region, to make it a world class resort. Where in the world would you find a combination of a sub-tropical sea and alpine skiing resorts located at less than half an hour distance, thanks to a brand new railway line and highway crossing mountain ranges through a network of tunnels, built specially for the Sochi Olympics?

This has a great importance for Russia as almost all the sea resorts after the Soviet collapse have gone to newly independent states Ukraine and Georgia. This money, anyway would have been spent to develop Sochi over decades, but the Winter Olympics set a time-frame of 7 years.

Wishing the success of the Sochi Winter Olympics, I assure you that in the coming days you will see a lot of negative coverage in the Western media.