Sochi and circus: A celebration of Olympic athletes 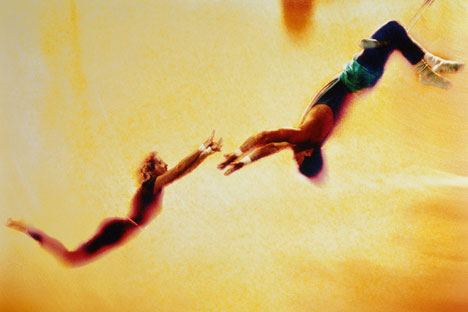 The Moscow Circus may seem a long ways from the 2014 Sochi Olympics, but in reality it has a lot more in common than most people would think.

Take the, “Flying Cranes,” for example, long considered the best flying trapeze act in the world.

By the time it went public in 1985, some five years of daily practices were spent putting it all together, unheard of in the world of circus or any other performing art for that matter.

The act was built around elite Soviet gymnasts who took their lifelong professional athleticism to the air, and learned to combine it with performance art after their career as world-class athletes was over. They portrayed flying white cranes from a famous Soviet film about WWII.

National Geographic filmed a documentary on the Soviet Circus, spotlighting this act and Vilen Golovko, its leader.

"Flying Cranes",  a video of a choreography class. Source: YouTube

I interviewed Pytor Maestrenko, the producer of the Flying Cranes and a well-known Russian producer of trapeze acts who explained that it took him a lifetime to execute his idea: in short, it took several hundred sketches done over decades, endless meetings over the years with circus engineers who custom designed the costly titanium equipment based on his ideas, musicians who compiled the pieces of classical Russian music, choreographers who created ballet-based movements for the entire lengthy production (which was then taught to hard core athletes not known for being graceful), and then, of course, the athletic trainer who spent years teaching the professional gymnasts exquisite aerial tricks, and how to point their toes while throwing triple somersaults at speeds the public doesn’t want to know.

Watch the entire act in these two videos.

The tricks are complicated in part because a flier has seconds to properly complete the maneuver and find the hands of the catcher at unheard of speeds. Miss the hands, miss the catch, plop, the flier lands on the net, and the whole aerial effect is ruined. Which is why the Cranes practiced so much even on the road.

In the world of trapeze, it’s not enough to learn a trick. It has to be caught consistently. The flier and catcher work as a team. Mistakes in the air are easily made in nanoseconds, and despite the net, they can be fatal.

In the end, the Flying Cranes took the world of the flying trapeze to new heights and changed the concept of trapeze forever. No longer did it have to be an act consisting of several flyers standing on a pedestal over one side of the net waiting their turn to throw a basic aerial trick into the hands of a waiting catcher on the other side, who then threw them back to the pedestal on the trapeze rebound.

But story aside, the most captivating element of the Cranes’ performance was the fliers themselves, the former athletes who displayed never seen before high levels of complex tricks that didn’t exactly raise the standard of trick throwing: they performed unique tricks still unprecedented today.

The Cranes became famous worldwide for their unique attempts to complete the aerial quintuple somersault, something never done before. As much as it was tried, they were not able to complete it consistently, and the flier whose body was able to attempt it got another job.

I have my own story to tell about the Cranes, who were a big part of my 20’s. I still talk to them today and they still inspire me.

But today in Sochi it’s about athletes like them, the people who’ve trained every day since they can remember, living lives the rest of us cannot even begin to comprehend, and making sacrifices unheard of just to win the gold.