Day 12: Pin trading and the rules for interacting with athletes 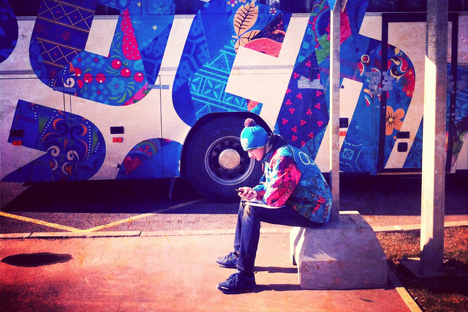 To thank volunteers for their assistance, members of foreign delegations and journalists present them with a souvenir. Source: Mikhail Mordasov

One of the best things about the Olympic Games is the opportunity to meet so many new people.

It is exciting to be surrounded by interesting people from all over the world. By the middle of the Games, you are no longer surprised when you see a famous journalistor your favorite sports photographer chatting with ordinary people at the bus stop.

Even those of us who do not speak foreign languages (unfortunately, despite the requirement to be able to speak at least basic English and the opportunity to attend free English lessons for a year ahead of the Olympics, a large number of volunteers remain unable to string three English words together) still manage to be of help to our foreign guests; sign language and a broad smile work wonders.

To thank volunteers for their assistance, members of foreign delegations and journalists present them with a souvenir, usually a pin. These have become a form of currency at the Olympics.

By the end of the first week, the lanyards that we wear our accreditations on were covered by a variety of pins from various countries and organizations. We trade them, trying to find the most rare and unusual ones; we boast about them ("Look what I've got, an official badge of the International Ski Federation!"); we are just proud to wear them.

If in the first days the most frequently asked question among volunteers was "Where are you from?" now, the most frequent greeting is: "Wow, where did you get this pin? Will you trade for it?" Trading pins is an old tradition of Olympic Games. Ours Sochi Games are no exception.

But not all volunteers have had such a positive experience. Some of them have failed to grasp the basic rules of appropriate behavior – especially the most important one: don’t get in the way of people who are working. It would seem to be clear that volunteers should not intrude on athletes in the competition zone, but not everyone is capable of resisting the temptation.

By the middle of the Games, some volunteers have been stripped of their accreditations. Most of the time this is for harassing athletes.

For example, at the Laura ski and biathlon venue, one athlete, an international star, complained to the organizers that volunteers were bothering him with requests for autographs and pictures right in the competition zone. As a result, several volunteers were sent packing.

If things like that happen at biathlon, one can imagine what must be happening at ice hockey games. Although since, according to a popular Soviet song, "hockey is not a game for cowards", volunteers selected for ice hockey events are probably all people of iron will. Who knows.