Who let the dogs in? 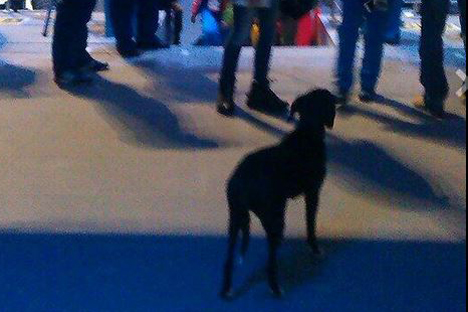 Sports expert James Ellingworth explores some of the controversies and contradictions thrown up during the first week of the Sochi Olympics. 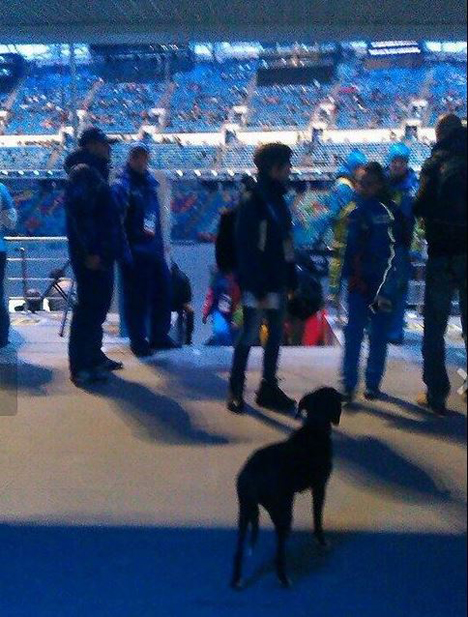 As spectators flooded in and the tension rose ahead of the Sochi Olympic opening ceremony, I spotted an unusual figure sneaking into the media zone.

He displayed no accreditation and had no respect whatsoever for the seating arrangements. Why? He was a dog.

Responding in the only way a prolific user of social media knows how, I jogged over and snapped a quick cellphone shot of the little black mutt against the backdrop of the Fisht Olympic Stadium’s lavishly-built interior.

As a pair of giggling young Olympic volunteers whisked the canine interloper toward the exit, I posted the photo on Twitter. As the ceremony went on, the retweet count soared into the dozens, then the hundreds, and gave some insight into how the Games are perceived around the world.

Since this came hard on the heels of reports that stray dogs were being poisoned in Sochi to reduce their numbers, many were understandably concerned about the dog’s fate. Even though I hadn’t seen him come to harm in any way, some people seemed a little too keen to think up various grisly fates for the dog. Personally, I thought that if he could sneak past the stadium’s “ring of steel” security, I wouldn’t bet against a Houdini-like escape.

When U.S. broadcaster Keith Olbermann tweeted the photo, the stadium’s free-spirited Fido began to be shared alongside the usual snaps of broken hotel rooms, all with a certain dash of glee that not all was perfect with the Russian Olympics. When one of the five Olympic rings failed to open during the ceremony, Olbermann added: “Dogs 2, Sochi 0.”

On the other side were conspiracy theorists keen to show me either as some corrupt stooge for foreign powers, a malign Photoshop expert keen to wreck the Games, or even the hapless dupe of some evil scheme. That canine intruder had been “planted” by Russia’s enemies, I was told.

Fast-forward a week and the same divisions over Sochi are in place, although the hysteria has quietened down somewhat. The more frenzied voices on either side even seem a little disappointed that most people are talking about winter sports instead of either a) what a failure Sochi is for Putin, or b) what a blow this triumph represents for the decadent West.

I’ve had what seems to be a fairly standard Sochi experience. Covering the Games from up in the mountains, I’ve had to deal with a substandard hotel room (cracked pipe spraying scalding water at knee height, laundry problems) before being moved to a rather cozy alternative.

I’ve been amazed by the quality of some of the sports facilities and let down by the way these glittering palaces are too often surrounded by muddy, unfinished wasteland. I love my morning cable-car ride from the hotel to the media center, with its stunning views of the snow-capped mountains, but the construction debris I see flowing down the river leaves a bitter taste.

Questions over Sochi’s legacy have receded as viewers have become more fixated on the sporting action rather than the surrounding politics. Separating politics from the Olympics, despite what politicians may say, is impossible – a good Games reflects well on the government hosting it, a bad Games brings shame – but I wonder if that effect is as big as people say it is. I have a hunch that, in the U.S. at least, snowboarder Shaun White’s failure to win a medal will stick in the mind rather longer than Vladimir Putin declaring the Games open.

One question is likely to remain unresolved, however – What happened to the dog?