Don’t ask what Saudi Arabia can do 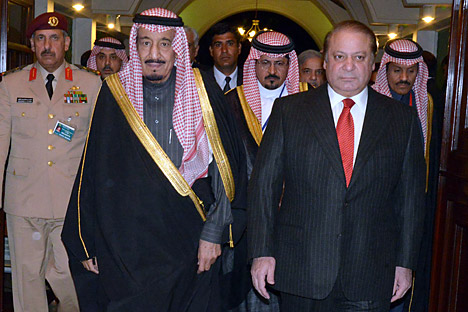 The Kingdom seems to be adopting a new “incremental” approach, which operated with much success during the Afghan ‘jihad’ in the 1980s – namely, equip the Syrian rebels with weapons that nullify the edge that the government forces enjoy.

The visit by a Saudi Arabian dignitary to Pakistan is always an event of high importance in regional politics. Especially when the dignitary happens to be the Crown Prince and Defence Minister Salman Bin Abdul-Aziz.

The Crown Prince’s visit (February 15-17) was carefully prepared by none other than Foreign Minister Saud Al-Faisal who came to Islamabad for consultations recently. In retrospect, as the Karachi-based establishment daily Dawn assessed, the “common regional view” that emerges between the two countries “signified growing centrality of Riyadh in Islamabad’s foreign and security policies.”

How this came about has a lot to do with regional politics in the Middle East and South Asia. One only needs to read through the joint statement issued in Islamabad after the Crown Prince’s visit to discern that the “common regional view” mentioned above essentially boils down to three regional issues – Syria, Afghanistan and Kashmir.

Afghanistan and Kashmir are traditionally hunting grounds for Saudi and Pakistani diplomacy and the joint statement doesn’t really add much. Delhi is unlikely to make a demarche on the Crown Prince’s invocation of te UN resolutions and may find it politically expedient to look away. But South Block will be amiss not to ponder why Riyadh felt it necessary to please Islamabad.

On the situation in Afghanistan, again, no fresh ground as such is broken, but the joint statement takes note for all purposes that in order for “the Afghan society to arrive at restoration of peace and stability,” Taliban need to be reconciled. How this objective is to be reached the joint statement doesn’t elaborate, but, interestingly, it “underlined” nonetheless the importance of the political transition in Afghanistan following the April presidential election.

What really makes the observer sit up is that the joint statement devoted a heft chunk to discussing the Syrian conflict. It called for four specific measures: a) immediate withdrawal of all foreign armed forces “and elements” from Syrian territory; b) the lifting of the siege of towns and villages and end to aerial and artillery bombardment by government forces; c) establishment of “safe corrdiors” under international supervision to reach humanitarian aid; and, d) formation of a “transitional governing body in Syria with full executive powers to take charge of the affairs.”

Pakistan has fallen in line with the known Saudi position on Syria. Dawn newspaper goes further to say the joint statement is “explicit about an understanding achieved.” The newspaper pointed out, “The striking similarity in the regional view… was Pakistan’s shifting position on Syria. Islamabad apparently… adopted a posture that is divergent with the policy being pursued by its most important regional ally – Beijing. Iran and Russia are also likely to feel uneasy.”

Indeed, as Dawn admitted, the joint statement is in line with the draft resolution that the US introduced in the UN Security Council last week.

Evidently, Saudi diplomacy has met with big success in getting Pakistan on board over the Syrian problem. Three questions arise in the downstream. One, why is Pakistan’s endorsement and support so important for Saudi Arabia? Two, what role would Pakistan play in furthering the Saudi agenda of regime change in Syria? Three, what does Pakistan hope to get in return by positioning itself as Saudi Arabia’s junior partner?

One does not need to look far to estimate Pakistan’s potential worth as a major Sunni Muslim country with regional and international standing with a powerful military and possessing nuclear capability and a highly strategic geographic location bordering Shi’ite Iran. Of course, Pakistan is no novice, either, when it comes to teddies of Middle Eastern politics. Arguably, there could be no other country in the prevailing regional milieu that could fit in so optimally as junior partner in the Saudi agenda when Riyadh feels profoundly unhappy with the US “inaction” in Syria and is groping its way forward as a lone wolf. Indeed, Pakistan is even unmatchable insofar as it wouldn’t have ambitions of its own – unlike, say, Turkey.

Saudi Arabia is reportedly stepping up arms supplies for the Syrian rebels, including sophisticated weapons. Reports have appeared that Syrian rebels numbering several thousands are being reared in training camps in Jordan under American supervision to invade Syria by summer. Clearly, military advisers and trainers with previous experience in preparing ‘jihad’ are much in demand nowadays in Jordan. Suffice to say, there is a big reservoir of retired military personnel in Pakistan, which can be tapped.

Furthermore, from the great attention paid by the Saudi Crown Prince to expanding the scope of cooperation with Pakistan’s defence industry, it stands to reason that Riyadh proposes to develop a new “supply chain” for the Syrian rebels, which is cost-effective and practical and logistically much easier to operate. Of course, the weapons made in Pakistan may not exactly be state-of-the-art, but they do just fine for an insurgent army.

Saudi Arabia seems to be adopting a new “incremental” approach, which operated with much success during the Afghan ‘jihad’ in the 1980s – namely, equip the Syrian rebels with weapons that nullify the edge that the government forces enjoy.

In sum, Pakistan may find its policy shift on Syria to be highly lucrative in monetary terms, apart from the spin-off effect on its defence industry as a whole. In political terms, too, Pakistan is willing to downgrade its relationship with Iran, which was characterized by much warmth during the previous leadership of President Asif Zardari. To be sure, the huge upswing n Saudi-Pakistani ties will cause unease in Tehran, which may partly explain the unprecedented warning by a senior Iranian minister on Monday that unless Pakistan took steps to curb the activities of a “Sunni Wahhabi” militant group perpetrating cross-border terrorism, Iranian security forces might feel constrained to act within Pakistan. In the current regional matrix, of course, any such tensions in Pakistan-Iran relations can only work to Saudi Arabia’s advantage.

In return, Riyadh could be of help to Islamabad as a “moderating influence” on the Sunni militant groups operating in the tribal regions bordering Afghanistan. This influence can be direct or via the Afghan Taliban, which enjoyed Saudi patronage. The Pakistani military capacity or political will to act against these militant groups appears doubtful and attempts at reconciliation are not making headway. This is where Saudi mediation could help.

From an Indian perspective, though, what needs to be watched is the resuscitation of Saudi-Pakistani coordination in Afghanistan to boost the Taliban’s future prospects. Pakistan and Saudi Arabia mentored the Taliban movement in the 1990s and charioted it to power in Kabul within a regional agenda that challenged the security of Iran and India.

Equally, Delhi had spent much political capital in the recent years to build the sinews of a strategic partnership with Saudi Arabia. One major consideration here was to gradually erode the “cutting edge” of Saudi-Pakistani relations and to discourage Riyadh’s compulsive urge to dabble in the Kashmir issue. Indeed, Delhi hoped that a new alchemy was developing – and, was most certainly willing to identify more with the Gulf Arabs while ignoring the Persians. But it seems the more things seemed to change, the more they remain the same.