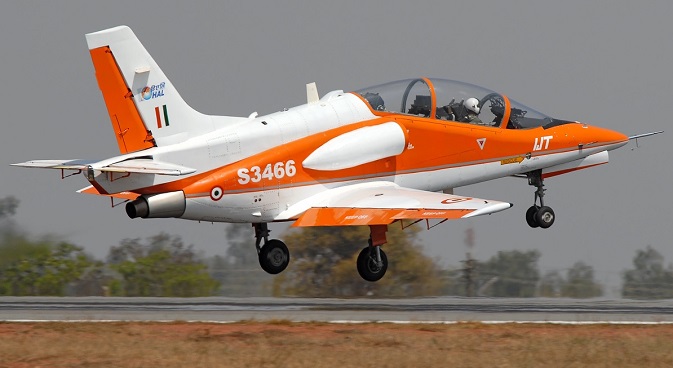 India’s brand new intermediate jet trainer has a Russian heart and Western flight control systems, but after backing the project for 14 years the IAF now wants to bail out and shop overseas.

Faced with a Mexican standoff over the home built intermediate jet trainer (IJT) the Indian Air Force (IAF) is prepared to shoot its way out of the crisis. Tired of waiting for the IJT – under development since 1999 – the IAF now wants to import Swiss jets as a contingency measure.

The IJT is aimed at providing high-speed training for IAF pilots entering the second stage of training. Rookies begin flight training in a basic trainer aircraft (BTA) and then on an IJT before moving on to an advanced jet trainer (AJT) to finally learn the art of combat flying.

With the induction of the Swiss Pilatus PC-7 and the British Hawk, IAF’s basic and advanced trainer requirements are taken care of. The problem is in the middle – the IJT, which is being manufactured by state-owned Hindustan Aeronautics Ltd (HAL).

Jet trainers haven’t remained unscathed from the bungles and time overruns that have become a defining characteristic of India’s defence imports. For instance, the Hawk AJT – which India finalised after a 20-year drawn out drama – encountered turbulence shortly after it was selected by the IAF. Upset over Britain’s inability – or perhaps unwillingness – to supply spares to HAL, which is assembling the Hawk in India, the IAF shelved plans to place follow-on orders and instead floated a new tender in 2009.

While the AJT at least made the long journey to India, the IJT is experiencing turbulence at takeoff. Powered by Snecma engines from France, the first two prototypes of HAL’s HJT-36 Sitara (meaning star in Hindi) flew in March 2003 and March 2004. However, the IAF felt the aircraft was underpowered.

India then turned to Russia. In 2005 HAL and NPO Saturn inked an agreement for the delivery of the more powerful AL-55I engine in India. The agreement included assistance in setting up the AL-55I production facilities at HAL’s aeroengineering centre in Koraput, western India. The contract stipulated production of at least 250 engines, with an option to produce more if needed.

Powered by the new Russian engine, the first prototype PT-1 of the HJT-36 made its maiden flight on May 9, 2009. With HAL's chief test pilot Squadron Leader Baldev Singh at the controls, the IJT made a 35-minute flight from Bangalore, reaching an altitude of 20,000 ft and a speed of 300 kph with the undercarriage down. Singh told Vayu magazine he was pleased with the new engine, and there was a “distinct difference in acceleration”.

Ilya Fedorov, managing director, NPO Saturn, agreed the AL-55I had put in a strong performance. “The HJT-36 aircraft developed by HAL is performing flights normally,” he told TASS in April 2012. “The customer is satisfied with the key engine parameters. There were no incidents or crashes caused by engine fault. Two contracts have been performed; research and development activities have been completed.”

A difference in opinion

Not everyone agrees. According to a report in the New Indian Express, “Engineers and designers at HAL’s Aircraft Research & Design Centre have the daunting task of identifying and correcting the inherent asymmetry of the aircraft. HAL hopes to get the Initial Operational Clearance for the IJT by the end of December 2013, though insiders said the deadline might get pushed to next year.”

The asymmetry issues are preventing the “stall and spin trials”. The aircraft reportedly rolls around 16 degrees, thereby forcing the pilots to abort the stall tests.

Although Indian Defence Minister A.K. Antony – known for his flip-flops – says the IJT will be ready for induction by the end of 2004, the IAF is unconvinced. It is also very pissed. Its fleet of 114 HAL-built HPT-32 Deepak basic trainers of 1960s vintage has been grounded since August 2009, because they are no longer safe to fly. It had to use equally ancient HJT-16 Kiran jets for both Stage-I and Stage-II fighter training.

Plus, in a few years the IAF will be inducting the Russia-India PAK-FA stealth fighter. Having a Generation 5 aircraft and Generation 2 trainer in the same air force borders on the ridiculous. But in India the ridiculous is normal these days.

The air force brass has supported the IJT development programme from the beginning and has ordered 73 planes from HAL. The IAF was originally scheduled to get the first batch of aircraft by 2007. With the change in the engine supplier, the deadline was moved to 2010. Now the delivery date is sometime in 2015.

Says Defense Industry Daily: “The Sitara still hasn’t achieved initial certification as of late 2013, and remains saddled with serious aerodynamic issues. The question is whether the plane can enter service by 2015, and whether it will be safe if it does.”

The new engine too hasn't received certification. “The Russian engine needs to be overhauled more frequently than suits the Air Force,” an IAF official told Defense News. The engine would need to be overhauled about every 150 hours of flying, while the air force wants the engine to operate at least 900 hours before an overhaul is needed.

A Russian diplomat, however, says the engine meets the basic requirements of the IJT, adding that the service life of the engine is being increased to 500 hours.

While 500 is a big improvement over 150, it is still not enough. Jet trainers conduct several sorties a day. If the IJT does, say, 10 sorties lasting an hour each daily, it would result in engines being overhauled every 50 days. That is going to severely limit aircraft availability, and the IAF finds that unacceptable.

A key problem with the HJT-36 is the plane is the United Nations of components. American vendor GE Aviation Systems is contracted to supply the integrated avionics system; the cockpits displays are from Thales of France; and Martin Baker is the ejection seat supplier. The list includes just the major ones.

Initially, HAL faced a number of issues during the integration of the engine with the aircraft’s other systems, not least being issues with the throttle control and the various indicators in the cockpit. Could this because HAL engineers are not up to the mark or is it because of incompatible vendors?

The company has also taken on too many projects, leading to delivery issues. For instance, the delivery of India-assembled Su-30MKI jet fighters to the IAF has been delayed because of development issues at HAL.

How not to design an aircraft

“The project suffered at every stage of its execution,” says a report by India’s Comptroller & Auditor General. “While the planning went awry with indecisiveness about the weight, thrust and life of the engine at the design stage itself, taking up production without Initial Operational Clearance did not serve the purpose of the IAF, which had projected requirement for the aircraft way back in 1999.”

With the benefit of hindsight, ordering a Russian engine – with very little oversight by the Indian user – and hoping to graft it on to the IJT was a rank bad idea.

As BrahMos CEO Sivathanu Pillai says, “You should know the customer. If a system is to be developed but the customer is not interested, then you are in the position of having to go after him begging.”

The BrahMos is an Indian cruise missile project that was built with Russian technology. Russian specialists are actually employed by the company in India, ensuring they are accountable for their work. It is a rare example of an Indian weapon that is loved by the army, navy and IAF.

The IJT project has exposed the rudimentary state of Indian aeronautics. When it comes to state of the art aircraft, India seems to be good only at screwdriver technology – which is euphemistically described as locally assembled. HAL's ability to absorb high-end technology is now in question.

But despite the numerous issues buffeting it, the jet is hardly a writeoff. For a start, it has actually been airborne – multiple times. That’s a milestone the Light Combat Aircraft, Tejas, took over 25 years to reach.

Whether the issues are with the engine, airframe or flight control systems, HAL needs to get cracking. For, right now the lack of a modern IJT is choking the supply of fresh pilots into the IAF.