Who’s afraid of the Dalai Lama? 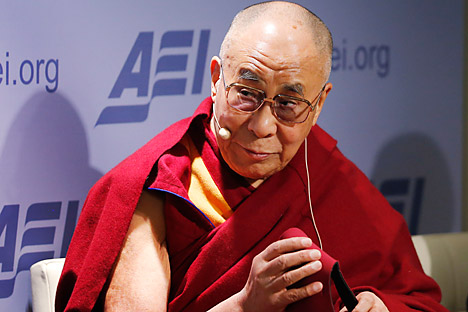 No matter what Barack Obama discussed with the Dalai Lama recently, it has no bearing on China’s Tibet policies.

China feels genuinely upset with the United States over the meeting between President Barack Obama and the Dalai Lama in the White House in Washington last weekend, but, nonetheless, will not make a mountain out of a molehill by making it an issue in the bilateral relations. This just about sums up Beijing’s strong criticism of the meeting and its growing confidence that the Tibetan movement is way past its prime and cannot any longer pose a serious diplomatic challenge internationally.

Of course, the US has a long history of involvement in Tibet, which according to the Chinese account, was a root cause of the 1959 rebellion. China alleged that the CIA-trained cadres and weapons were airdropped in Tibet to participate in the rebellion and to escort the Dalai Lama to India. The US interference continued through the 1960s but following the normalization of Sino-American relationship, it took a different form and in the period since then got suffused with “public diplomacy”, one vector being the periodic reception accorded to the Dalai Lama by senior US politicians and another devolving upon the US’ substantial financial support for him.

In the post-cold war era, Washington revved up the involvement with President H.W. Bush meeting the Dalai Lama in 1991. During the Bill Clinton presidency, in 1997, the US state department for the first time designated a Special Coordinator for Tibetan issues. The presidency of George W. Bush even saw a significant stepping up of US financial support for the Dalai Lama, with the Congress passing the Tibetan Policy Act in 2002 and holding public hearings on Tibetan issues.

However, President Barack has followed a middle line by showing just the level of interest in the human rights situation in China to ward off domestic criticism that he is indifferent, but at the same time displaying manifestly his lack of enthusiasm about the Dalai Lama and his travails and taking care to sequester the rising graph of US-China relations from being complicated by Tibetan issues.

Looking back, it seems Obama went through the meeting with the Dalai Lama with the reasonable confidence that it wouldn’t damage the US-China relationship as such. His assessment stands vindicated.

Of course, China didn’t mince words in showing its “strong indignation and firm opposition” at the diplomatic level – both before and after the meeting at the White House – that the US was “severely interfering” in China’s internal affairs, “breaking promise” not to support Tibet’s independence, “violating the basic norms” of inter-state behavior, “damaging” the US-China relations and so on. The Chinese demarche at Washington underscored that “showing respect to each other’s core interests and major concerns is key to ensuring the sound and steady development of the China-US relations”.

But after having said all that, the caravan moves on. Fortunately, no hard decisions need to be taken for a month at least because no major US-China engagements have been slated. There is no sign of the scheduled meeting of President Xi Jinping with Obama on the sidelines of the nuclear security summit at the Hague on March 24-25 being in jeopardy, as would probably have been the case if the interlocutor were British Prime Minister David Cameron or France’s President Francois Hollande or German Chancellor Angela Merkel.

But then, the US falls into an altogether different category. As the communist party tabloid newspaper The Global Times noted in a commentary quoting a Chinese pundit, “Washington and Beijing share a more significant and complicated relationship [in comparison with France, Germany and Britain] which is defined by a wide range of factors. While the two countries have disputes over an array of issues including recent rows in the East China Sea, they are increasingly inter-dependent and have to cooperate on international issues such as Iran and North Korea. China is also the US’ biggest foreign creditor… A single incident could hardly shake the foundations of the Sino-US relationship.”

The paper explained that three or four factors become relevant here. One, look at the form of it: true, ignoring Chinese warnings and protests Obama did meet the Dalai Lama, but then, this was their third meeting and it once again took place in the Map Room on the ground floor of the president’s residence, “which is of less significance than the Oval Office.”

Clearly, Obama was hoping to “pander to the domestic audience.” And knowing such meetings with the Dalai Lama are “contradictory to the interests of Sino-US relations,” he tried to “walk a fine line to try to minimize the impact.” The point is, the White House “tried to keep the meeting relatively low-profile.”

As regards the substance of the meeting in the White House, how does it matter anyway? No matter what Obama discussed with the Dalai Lama, it has no bearing on China’s Tibet policies. With China’s inexorable rise, US practices with regard to Tibet or Taiwan are “having less impact”. Indeed, the Dalai Lama’s influence itself is waning and “except some funding, Western countries have nothing to give” him.

Besides, the US also realizes that while it tries to play the card, “in the political game over the Dalai Lama, time and justice stand with China.”

Frankly, much as the US may have caused some embarrassment to China over the latest meeting, “as long as China keeps its momentum in growing stronger, China will be more resourceful in dealing with such situations.”

All in all, therefore, even if China’s protest has been ineffective in the given instance, China has no choice but to protest. And after having protested, China will concentrate on cooperation with the US, since, as People’s Daily wrote last week, common interests of the two countries have reached an unprecedented level and “win-win cooperation is the only sensible choice for both sides.”