A sailor departs, India in self-doubt 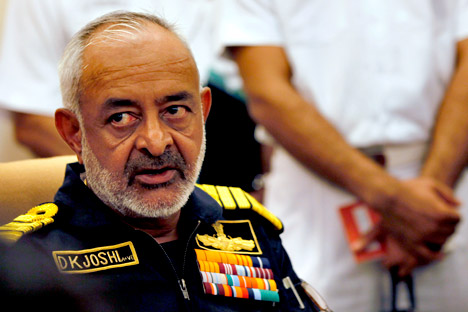 Admiral Joshi’s resignation sets a new benchmark for India’s military as a whole. If professionalism among the uniformed men declines, is the political leadership responsible for it?

The resignation by India’s navy chief Admiral D. K. Joshi, owning responsibility  for the ‘accident’ on yet another submarine, was the right thing to do. He could have been cashiered, which is not uncommon in most countries, when a steady decline appeared in professionalism in the ranks of the Navy. But India’s civilian leadership shows great patience and seamless latitude to military commanders.

The country’s top ranking generals squabbled publicly in the not-too-recent past, but life moved on. It transpired that there was one occasion when the civilian leadership lost sleep over the suspicious movements of army formations near the Indian capital one suspenseful night. A few incidents surfaced recently involving army officers and lowly ranks getting into brawls to settle old scores with abandon. But no heads apparently rolled. Not a single general lost his job. And the Indian public continues to adore the military as the stuff of folklore in a mythical world of pristine sacrifice, valor and honor.

Suffice to say, therefore, Admiral Joshi’s resignation sets a new benchmark for India’s military as a whole. If professionalism among the uniformed men declines, is the political leadership responsible for it? Indeed, that is not the case. The civilian leadership cannot be blamed if submariners default in the refueling of their boat at the base because of sheer negligence or if army procures substandard ration for its canteens. It should be the chain of command within the armed forces that owns responsibility.

However, Admiral Joshi’s resignation has led to some outlandish opinion-making – that the growing incidents of ‘accidents’ in the Indian Navy are symptomatic of a larger malaise of a ‘looming military breakdown’ because of obsolete weaponry. This is an utterly laughable suggestion – except that it permeates public perceptions.

The specious argument here is that the modernization of the military is moving tardily because at the ‘whiff of scandal’, the political leadership cries halt to acquisition process. But then, the civilian leadership is expected to maintain a ‘stellar reputation’, while on the other hand detractors hold it to be remiss in efficiency if checks and balances are introduced into the acquisition process with a view to make it transparent and accountable, which is in reality causing the slowdown the decision-making.

Of course, as things stand, Indian army may face a shortage of equipment if it is called to fight war on two fronts simultaneously, as it has been apparently planning. Now, it is entirely conceivable that India’s armed forces may literally wither away if it is called upon to fight on three or four fronts simultaneously – instead of a mere two fronts. The point is, there is no end to setting threat perceptions.

Why should India prepare for wars on two fronts? Common sense would suggest that Pakistan is not at all in a position in a foreseeable future to launch a conventional war against India, given the gravity of the problems overwhelming that country’s economy, politics and society, apart from its acute internal security situation. Again, unless the Chinese leadership is downright stupid or senile (of which there is no sign), why should Beijing order a military aggression against India? On the other hand, India’s other neighbours – Maldives, Nepal, Bhutan, Bangladesh and Sri Lanka – cannot afford to being on adversarial terms with India.

Now, India is not an expansionist power, either. Simply put, it should not get into the trap of great-power fantasies and plunge into the depths of gloom and pessimism that it lacks the wherewithal of force projection into the global commons. There is much wisdom in the remark  by the American civil rights leader Jesse Jackson, while on a visit to Kolkata last week that India should get its priorities straight – “The unfinished business of the Indian liberation struggle… is freedom from poverty.”

Suffice to say, India’s pundits decided to set a needlessly high threshold of operational capability – having to cope with two wars on the country’s borders at the same time  – and are feeling gloomy that the armed forces lack such capability. They are angry with the ‘inept’ political leadership for this impasse.

The proper thing to do is to introspect calmly why India should work itself into such paroxysms of anxiety, which is so patently unnecessary on empirical terms. Actually, a well-known Indian strategic thinker recently advised that India is ‘arming itself into dependency’ on the Americans and in the interests of India’s long term military modernization it should instead focus on building up a defence industry with the help of friendly countries that are willing to share modern technology.

As things stand, India’s main national security challenge lies in the internal security sphere and not on its borders. The Indian military is adequately coping with the challenges on the border and with the passage of time and better infrastructure development, its performance even on the disputed border region with China is improving.  However, the dismal truth is that the caliber of India’s military personnel is declining. A series of scandals appeared lately of India’s naval officers allegedly indulging in ‘wife-swapping’.

Arguably, such abysmal break down in discipline and morale is a reflection of the overall decline in national standards affecting all spheres of life, but then, the military is always expected to be on a different footing. Why is it that such bizarre happenings are becoming frequent in the armed forces? The armed forces personnel are well paid by Indian standards and they also get a lot of perks and privileges to cushion their private life.