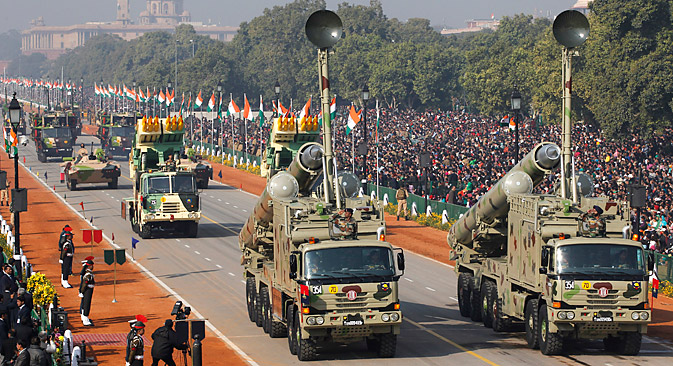 With the Indian private sector rushing into defence production, the stage is set for the creation of a large military industrial complex in the country. If Russian companies want a piece of the action, they’ll have to find suitable partners in the private sector.

India is the only major power that purchases the majority – over 60 percent – of its defence requirements through imports. Over-reliance on defence imports not only leaves the country strategically vulnerable, it also involves a huge drain of wealth. Plus, the kickbacks that accompany such deals can result in a compromised military and civilian leadership.

It was newly independent India’s Gandhian aversion for war that made it impossible for India to develop a defence industrial base. Writing in Rediff, retired Lt Gen Eric A. Vas offers a chilling peek into the mindset of India’s political leadership. During the 1948 war when Nehru was being briefed by Indian Air Force pilots in Kashmir, he was told they were using 500 lb bombs against Pakistan Army infiltrators. He at once said this was an excessive use of force and the less powerful 250 lb bomb should be used, because in his view this was a violation of the principle of minimum force.

Lt Gen Vas says on another occasion, Nehru was shown a brief film about an air-to-air missile the IAF was interested in. When the clip ended with the missile downing an 'enemy' plane in a cloud of flame, Nehru got up in a rage, and shouted, "I will have nothing to do with these sort of weapons" and stormed out of the room followed by his daughter Indira Gandhi.

Nehru’s cue was taken by other – equally misguided – leaders. Speaking on the defence budget in the Lok Sabha in 1957, hard boiled Gandhian Acharya Kriplani said: “The mounting expenses on the army must be cut down. The followers of Gandhi and adherents of universal peace should not increase military expenditure.”

Is it any wonder India can’t produce a world class jet while late comer South Korea is designing a stealth fighter?

Days of abstinence are over

After decades of blindly following Gandhi’s disastrous diktats, India is making a philosophy flip – to stay in the fight, you need military might. Trending currently is a big rush by domestic companies to elbow into a turf for long dominated by foreign defence suppliers.

In a development that should be a wakeup call for India’s Defence Research & Development Organisation (DRDO), Tata Power has for the first time built an Indian prototype of a 155 MM mounted artillery gun system that is 65 per cent indigenous.

In fact, the $110 billion Tata Group has as many as 14 defence companies, and projects a 40 per cent jump in defence sales in 2014 on the back of outsourcing contracts it has inked with Lockheed Martin and Sirkosky Aircraft.

At Defexpo 2014 in New Delhi, Larsen & Toubro, which has tied up with Nexter of France, unveiled a new version of its Caesar 155 MM mounted gun system.

Another JV announced a day before Defexpo 2014 was between Bharat Forge Ltd and Israel’s Elbit Systems. The company intends to build advanced artillery guns and mortars.

Equity and other barriers

Despite the enthusiasm of the private section to enter the defence sector – no doubt with an eye on India’s $120 billion planned spending over the next five years – it is not going to be an easy market to crack.

Having almost zero experience in the sector, Indian companies will require foreign partners. But foreign companies cannot have more than 26 per cent equity stake in the Indian defence sector. No major manufacturer will jump into a JV to produce high tech weaponry in India unless that limit is raised to at least 49 per cent.

In February 2013, Britain’s BAE Systems walked out of a JV with Mahindra & Mahindra, ending their partnership formed in 2009. BAE had 26 per cent equity in Mahindra Defence Systems.

Then there’s the offset clause – which makes it mandatory for foreign arms vendors to outsource a good chunk of their work to India. But Western companies are unlikely to welcome India’s transformation from the world’s top arms importer into a weapons production hub. It’s simply bad for their business. A good example is France’s Dassault, which is playing hardball over offsets to India in connection with the Rafale jet contract.

The Russians are coming

On the other hand, Russian as well as Israeli firms are more open towards transferring technology via partnerships with Indian firms.

Russia also does not adopt a hypocritical posture when it comes to how or where its weapons are used. The United States is the biggest culprit in this regard, and is known to cut off military supplies, especially during a crunch. Both Pakistan and Egypt have suffered from America’s moralistic flipflop, which springs from the country’s Puritan Christian DNA.

Moscow was one of the first to help India establish a defence industry, transferring serious technology at a time when the West turned its back. It is currently helping out in several big-ticket projects, including nuclear powered submarines, indigenous aircraft carriers, theatre air defence missiles and hypersonic missiles.

Among the new artillery pieces on show at Defexpo 2014 was a new Arjun tank chassis mated with a Russian built M-46 130mm self-propelled gun system. Known as the Arjun Catapult, the vehicle was developed by the DRDO’s Indian Combat Vehicle Research & Development Establishment. The Indian Army is reportedly planning to buy 40 of these heavy hitters to equip two artillery regiments.

However, Russia has to change tack and start partnering with private sector companies. This is imperative because doing business in India means getting past the country’s notoriously slow and powerful bureaucracy, and India’s private sector has the expertise in oiling the levers of the bureaucratic machinery.

Going by the size and intent of the Russian contingent at Defexpo 2014, the bear appears willing to learn new tricks. Rosoboronexport – Russia’s primary weapons export cartel – came out all guns blazing, with as many as 48 companies at the expo.

Rosoboronexport says it will explore joint development and production deals in India for weaponry and military equipment. Its talks with potential local partners are in almost all cases “directly related to setting up JVs, establishing licensed production and transfer of technology” says Ivan Goncharenko, the company’s First Deputy General Director.

Also promising is the new partnership between Morinformsystem Agat and Pipavav Shipyard, the first Indian corporate shipyard to be granted clearance to build warships and other vessels for the Indian Navy.

The two companies inked a series of MoUs on the sidelines of Defexpo 2014. Key projects they are likely to work on include radar, sonar, robotics, “high-speed surface shipbuilding” and a Combat Management System that’s strategically important for the Indian Navy.

In 2012 the Kauffman Foundation published a survey that showed 29 per cent of all defence and aerospace startups in the United States were established by Indians.

Considering that Indians comprise barely 1 per cent of America’s population, that’s some achievement. It is hardly surprising that the United States gives priority green cards to Indian immigrants who possess high-tech skills.

However, for most Indians migration is a last resort; they would rather seek work locally provided challenging jobs and a conducive work environment are available. If the current wave of joint ventures between the private sector and foreign weapons manufacturers results in a thriving military industry in the country, many of these engineers are likely to stay home.

Any way you look at it, it’s win-win for both sides. The benefits to India from Russian technology and expertise are obvious.

And by offshoring production to India, the Russian armaments industry – which faces a serious manpower shortage – could find its future weapons designers from Indian universities. Plus, it could tap experienced Indian defence industry engineers – who are forced to retire at the shockingly young age of 60.