Public editor: Ukraine, cartoons and ways to be Armed by Russia 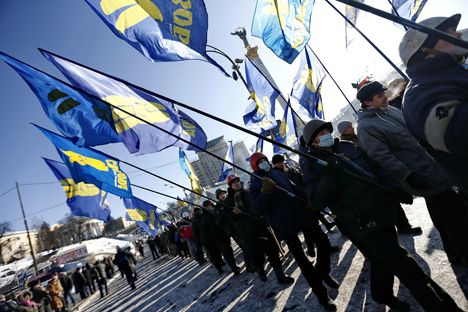 The question of whether or not the Crimea will attempt to separate from Ukraine certainly has a unique Russian angle. Source: Photoshot / Vostock-Photo

This week, the RBTH audience tried to keep up with the latest news from Ukraine, while also checking out clips of Soviet cartoons and reading about historical weaponry.

Search “Russia” on the website of any major newspaper this week, and at least half of the top search results are likely to be about Ukraine. The countries are inextricably linked.

The earliest incarnation of the Russian nation, Kievan rus’, was located not in present-day Russia, but in Ukraine. And yet the modern boundaries of these two countries have seemed at RBTH an excuse not to talk about the situation as much as we might have.

How to cover the rapidly unfolding situation in Ukraine has been a major point of contention in our newsroom, with some arguing that we need to get deeper into the story – or at least give a daily rundown of the latest changes in the country – with others saying that we are not “Ukraine Beyond the Headlines,” and that we should only publish stories with a strong Russian angle on the situation or giving the reaction of Russian officials and experts.

Our internal conflict, like that in Ukraine, remains unresolved. But you can follow the story at our hot topic. The question of whether or not the Crimea will attempt to separate from Ukraine certainly has a unique Russian angle, and you can expect more on this from us in the coming days.

Incidentally, this aspect of the situation in Ukraine has been the most-discussed among our audience on Facebook, many of whom believe that the disintegration of Ukraine is inevitable.

Aside from articles related to Ukraine, the most-read and commented about story on our site this week was on the five most popular Soviet cartoon series. From “Nu Pogodi,” the Soviet version of “Tom and Jerry” to the stop-action tales of Gena the Crocodile and Cheburashka, these classics, like the best animation, work on many levels.

They are entertaining stories, but they also speak volumes about life in the Soviet era. Despite having watched hours of “Nu, Pogodi!” I had never noticed that the “bad guy” is dressed like a western hipster, while his nemesis looks like a proper Soviet schoolboy.

Many readers said the clips of the cartoons took them back to their childhoods, and one argued that we missed some classics.

Fans of the cult classic Hedgehog in the Fog, which was highlighted in this text, also were excited this week by the announcement that Russia’s Imperial Porcelain Factory has immortalized the characters. Maybe the wolf and hare of “Nu, Pogodi!” will be next.

Finally, we launched a new section on the site this week, Armed by Russia,  which will look at the history of Russian weaponry. We have known for some time that stories about history and stories about weapons are well received by our audience, so this section will aim to combine both those interests and take readers “beyond” the Kalashnikov. Our first story in the section tells the story of Vladimir Fyodorov, who designed the world’s first assault rifle.

Eventually, we plan to supplement this section with a timeline and infographic images of the weapons.

If there’s a weapon you’d like to know the history of, send us a message and we’ll pass it on to our writers.

Because history of all kinds has also proven popular with our audience, we’ve added a “history” tag to our stories, to make them easier for you to find. You can also go to rbth.ru/history.