A fast to pay for the feast 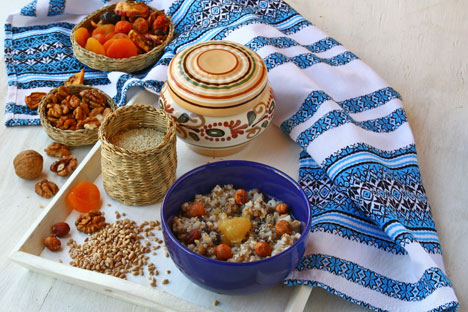 For Orthodox believers, the restrictive Lenten fast is supposed to give practitioners freedom from earthly desires, but sometimes it has the opposite effect.

After the festival of Maslenitsa, which involves eating lots of crepes and and finally setting things on fire, Lent begins. In Russia, the time season known as Lent in the Western church is known as the Great Fast (Veliky post) to distinguish it from other fasting periods during the church year.

Great Lent is the most important fasting season in Eastern Orthodoxy, and as the name indicates, this fast is like no other. Orthodox believers don’t decide on their own what to give up – the church does it for them.

IN PICTURES: Burning Marena and waking the bear at Maslenitsa

The fasting rules of Orthodoxy are derived from the monastic rules for fasting. During Lent, Orthodox believers abstain from consuming all animal products. They also do not cook with olive oil or drink alcohol.

There are a few exceptions; some important feast days occur during Great Lent, such as the Feast of the Annunciation, and on these days, believers are allowed oil, alcohol and sometimes fish.

According to the website of the Orthodox Church in America, Lent "is an opportunity to free ourselves from the sinful desires and urges of our fallen nature, and to nourish our souls with prayer and repentance."

Rather than thinking about all the ways Lent restricts behavior, Orthodox believers prefer to look at the season as a freedom from earthly desires that allows them to focus on otherworldly things.

However, preparing to eat a vegan diet for seven weeks, for those who aren’t already vegan, takes a lot of focus on things of this world. Especially in a place where vegetarian and vegan-ism are still fairly rare.

Tofu isn’t something you can pick up at the corner store, although this week upscale supermarkets in Moscow have increased their supplies of hummus and soymilk and labeled everything fast-friendly with handy signs.

There are also recipe exchange groups on social media to help those fasting come up with new menus and source hard-to-find foods.

However, the difficulty of cooking for the fast is just an excuse to eat out more! In Moscow during Great Lent, every restaurant has a fast-friendly menu – from the Israeli café whose menu is at least half vegan anyhow to the office cafeteria.

Never mind that in a survey taken by the All-Russian Public Opinion Research Center (VTsIOM) last year, only 6 percent of respondents intended to completely keep the fast (up from 4 percent in 2002).

Why, then, the ubiquitousness of the Lenten menu? Maybe it’s a case of peer pressure among restaurant owners. Maybe it’s worth a little effort to not alienate whatever potential customers might be looking for that Lent-friendly sign, especially as the culture of eating out in Russia expands and competition increases.

In any case, for vegetarians, rather than a period of restriction, Lent is a time to try restaurants that wouldn’t be very accessible at other times of the year. For everyone else, it’s a long seven weeks until Easter.