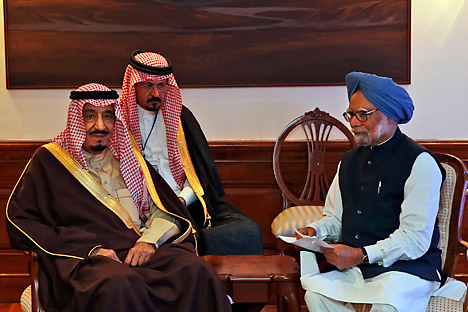 It has been a fine hour for Saudi diplomacy in South Asia, insofar as the Crown Prince visited Islamabad, Delhi and Male and made all three feel rather special.

When dignitaries from two countries, which are not exactly on good terms with each other, land in Delhi on the same day, it became a coincidence. It is difficult to glean the meaning of the delightful coincidence that the Iranian Foreign Minister Mohammad Javad Zarif arrived in Delhi on a day the Crown Prince and Defence Minister of Saudi Arabia Salman bin Abdulaziz Al Saud also happened to be in town.

The best spin that can be given is that Delhi made a valiant attempt to mediate the historic sectarian tensions between the two regional heavyweights. Saudi Arabia and Iran have a long history of mutual antipathy, which is cultural, economic and political – and is increasingly geopolitical.

Salman bin Abdulaziz Al Saud undertook a visit to Islamabad before arriving in Delhi, underscoring Pakistan’s prerogative to claim Saudi favors as a brotherly country. From all accounts, the Saudi Defence Minister had productive visit too, as he lined up Pakistani supplies of sophisticated weapons for the ‘freedom fighters’ in Syria.

Delhi lacks the capacity to erode the robust Riyadh-Islamabad strategic axis, and is left with no option but to put a brave face on it. Meanwhile, India also began developing a fruitful relationship with Saudi Arabia, which provides employment to some two million Indians who bring in invisible earnings running into billions of dollars.

However, the Saudi diplomacy did one better. From Delhi, Salman bin Abdulaziz Al Saud headed for the Maldives. It has been a fine hour for Saudi diplomacy in South Asia, insofar as the Crown Prince visited Islamabad, Delhi and Male and made all three feel rather special.

The inclusion of Maldives in the itinerary no doubt signals a serious message. The Maldives is a Sunni Muslim country and is also lately showing a pronounced inclination to reinforce its Islamic identity, which in a subtle way would differentiate it from secular India. The Indian security establishment has been watchful about reports appearing periodically that ‘jihadis’ have been spotted in the Maldives, but Delhi draws comfort that on balance Pakistan still remains a bit player in Maldives.

Enter Salman bin Abdulaziz Al Saud. What is it that Saudi Arabia can do to reinforce Maldives’ Islamic identity? Frankly, quite a lot. Maldives has sought a soft loan from Saudi Arabia to the tune of $300 million. Now, that’s small change for Riyadh, perhaps, but in per capita terms it is a veritable fortune for the Maldives with a population of 350,000 people.

What can give Saudi Arabia in return? There is an Arab News report last week that the Saudi-based company Best Choice Real Estate Development has finalized a project to develop a tourist property worth $100 million in Vadinolhu Island in the Maldives.

The Saudi company plans to develop the Vadinolhu Island’s seven-hectare area as an eco-friendly five-star resort which will feature 100 beach villas, including water bungalows and luxury suites and will offer “world-class dining services, wellness facilities and leisure activities.” Of course, the Maldives can be a huge attraction as a watering hole for wealthy Saudis.

However, the Indian media overlooked the Saudi high profile visit to the Maldives – although the Chinese media took due note. The joint statement issued after the visit to Maldives expressed the resolve of the two sides to fight extremism and terrorism in all forms and manifestations and to boost bilateral security cooperation. It highlighted the two countries’ affinity as followers of moderate and tolerant principles of Islam.

Ironically, India’s pundits are obsessed with the Chinese ‘presence’ in the Maldives. Of course, the Maldives gets the highest number of tourists from China who largely comprise that country’s burgeoning middle class vacationers and fake honeymooners who take big spending to Maldives. But the sheikhs are going to bring in something very special – pristine Wahhabism. The sheikhs can help mould Maldives’ Wahhabi identity.

The sheikhs have done exceedingly well to team up with a multi-millionaire philanthropist-politician who is a key figure among the movers and shakers in Male and is aligned with the Islamic party Adhaalath, whose manifesto advocates the goal of making Sharia the only source of law in the Maldives and dreams of the country’s future as an Islamic state belonging to a revived global Caliphate.