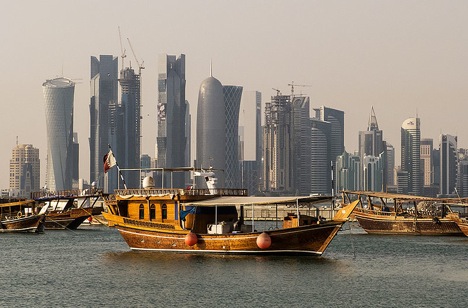 Traditional dhows in front of the West Bay skyline as seen from the Corniche, in Doha, Qatar. Source: StellarD / wikipedia

In a manner of speaking, if the Gulf region catches cold, Indian economy will shiver. That alone makes the latest tidings from the region rather ominous from an Indian perspective.

The announcement last Wednesday that Saudi Arabia, the United Arab Emirates and Bahrain have withdrawn their ambassadors in Doha, Qatar, is an unprecedented step in the 33-year old history of the Gulf Cooperation Council [GCC], but it is probably a surprising escalation of latent tensions that didn’t exactly come out of the blue. But India needs to be on guard because the protagonists in the Gulf feud are all its close partners. Millions of Indians live in that region.

In a joint statement the three countries – Saudi Arabia, the UAE and Bahrain – explained as the reason Qatar’s failure to fulfill the terms of a hitherto-unknown November agreement, which put the obligation on Doha not to “support any party aiming to threaten the security and stability of any GCC member.”

Put simply, Saudi Arabia, the UAE and Bahrain have alleged that Qatar has been interfering in their internal affairs and should mend its ways and Doha refuses to pay heed. Indeed, this becomes much more than a spat or a mere diplomatic rift.

According to reports from the region, the Saudi decision followed a foreign-minister level GCC meeting in Kuwait in mid-February, which was attended by the emir of Qatar, during which foreign minister Saud al-Faisal made direct accusation that Qatar was posing threat to the security of Saudi Arabia and Egypt by backing the Muslim Brotherhood and that the Brothers have been allowed to operate out of Doha with impunity.

It appears Faisal did some plain-speaking at the Kuwait meet to the effect that the Saudi reprisal step would begin with the recall of ambassador, but would expand to include in the downstream closure of land borders with Qatar, denial of airspace for Qatari airliners, and the eventual expulsion of Qatar from the GCC and the Arab League.

The Saudi-Qatari relationship has a complicated history for the past century, characterized by intermittent periods of tensions. Thus, Qatar’s ties with Syria, Iran and the resistance movements in Palestine and Lebanon were as much an independent foreign policy foray signifying vast ambitions of becoming a regional heavyweight as a strategic defiance of the Saudi claim to be the sole regional leader of the Gulf Arabs.

Any number of areas can be identified as forming the discord between Riyadh and Dona, but at the end of the day, it is the Arab Spring that has queered the pitch for Saudi-Qatari relations. To cut a story short, the breaking point came when the Egyptian president Mohamed Morsi whom Qatar strongly supported, was deposed last year and the spiritual leader of the Brotherhood Sheikh Yusuf al-Qaradawi took shelter in Doha from where in sermon after sermon he has been attacking Saudi policies toward Egypt being “against Islamic rule.”

Repeated Saudi demarche with Doha to rein in the Brothers led nowhere. Meanwhile, Qatar has responded to Wednesday’s Saudi decision somewhat disdainfully. The cabinet expressed “regret and surprise” over the decision and maintained that the decision “has nothing to do with the interests, security and stability of GCC peoples but rather a difference in positions on issues out of the GCC.” It pledged to remain committed to GCC principles and took the high ground that keeping in view the “brotherly ties between the Qatari people and fellow brotherly GCC peoples”, it refrains from “taking a similar procedure of recalling its ambassadors.”

In sum, Qatar has no intentions to bend to the Saudi demands to abandon its support for the Brotherhood, which espouses the cause of the democratic transformation of the Middle East under its leadership. Clearly, the Saudi-Qatari feud is only likely to escalate in the immediate future.

Saudi Arabia is already upset over its waning influence in the region and Qatar’s openness to modernity, Western education and political and ideological pragmatism is resented in Riyadh. To cap it all, Al Jazeera remains a thorn in the Saudi (and Bahraini side), while Qatar blithely maintains that it is an independent television channel outside governmental control.

In a broader perspective, all this bears a surreal look. The fact of the matter is that Qatar is a close ally of the West and the Brothers are in the Americans’ ‘good books’, to put it mildly, as a legitimate entity in the political landscape of the Middle East. It is inconceivable that Washington is unaware that from a city where the US’ Central Command is headquartered, the Brothers are openly discrediting the Saudi regime and eroding its popular support, especially among the educated middle class, and hoping to undermine the monarchies.

Equally, the US would know that the Saudi regime perceives the Brotherhood as a deeply threatening trans-national force that impacts on the stability of Egypt and the Gulf countries. Simon Henderson of the Washington Institute for Near East Policy estimates that “Washington may well have been aware of the diplomatic rift [between Riyadh and Doha] before it was announced.”

In that case, prima facie, the rift amounts to a huge setback to US’ diplomacy with its Gulf allies, because it virtually undermines the GCC, which is a crucial vehicle of American geo-strategy. That seems implausible, given the huge implications for the US’ regional strategies in the Gulf region.

On the other hand, the fact that all this is happening in the shadow of the Arab Spring gives an entirely different dimension to the Saudi move against Qatar and the latter’s cavalier response. Quite obviously, Saudi Arabia and its allies in the GCC are becoming very nervous that Qatar may be used to introduce the kind of instability in the Persian Gulf region that North Africa and Egypt are going through. Interestingly, the Saudis acted when hardly three weeks remain for President Barack Obama’s visit to Riyadh.