Questions of identity in India and Russia 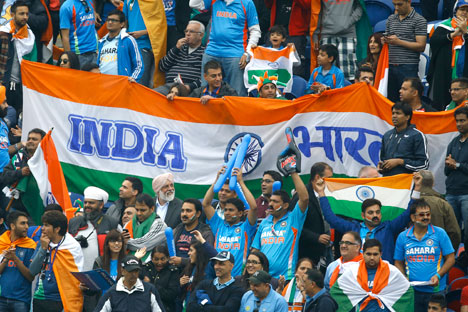 As these fans show, cricket is a great unifier for India. Source: AP

Being a more ethnically and linguistically diverse country than Russia, India is still looking for a common thread that can be an overriding factor of unity.

It’s easy for many in Russia to empathise with Russian speakers in Crimea, which is in the eye of a geopolitical storm these days. Ethnically there is no difference between Russians and Ukrainians, and the Russian language, which a vast majority of Ukrainians speak, (either as a first or second language) is the strongest bond between the neighbours. The greater Russian identity is bound by the language, which is spoken exactly the same way it is in Kaliningrad as it is in Kamchatka.

To a large extent the Russian identity does arise from the language. In a country not known for its political correctness, it is not nice to ask someone who speaks perfect and unaccented Russian about their “national origins.” The assumption is ‘if someone speaks like a native speaker then treat the person like a native.’ It is also a sore spot for those whose parents belong to different ethnicities to be questioned on where they’re from or even be complimented on their wonderful Russian. More than the “Russian Soul,” it’s the language that holds the country together. The country faces a class divide and of course, there is a degree of snobbishness that those in the capital and other big cities feel towards “provincials” but that is more the rule than the exception anywhere.

India, which is a more ethnically and linguistically diverse country than Russia, is sharply divided on several fault lines. As the general elections approach, the political class tries to play on the factors that set one Indian against another. It’s not just the illiterate and the economically backward in the country that hold their religious, caste or linguistic identity as sacrosanct. A glimpse of social media accounts is enough to understand that for a large number of educated Indians, being Indian seems to come last in the pecking order.

Irritated that my timeline was being clogged by petty regional posts from a person I otherwise found interesting, I asked her why she was spamming the world with her ‘proud to be from X state’ posts. Her response was that she belonged to her state first and she was an Indian next. This friend isn’t a self-loathing Indian or the kind of person who would sell her soul for a Green Card.  She’s just more vocal about her feelings on the concept of having a greater linguistic identity. These things usually fade away when the Indian cricket team performs well, or an Indian citizen is wronged abroad for some reason. In the latter case, when there is an external enemy, the patriotism level rises in India, buoyed on by the TV stations.

The modern Indian republic has only been around in its present shape and form since 1950. The very European concept of nationalism didn’t exist in the Indian subcontinent and much of Southeast Asia until the arrival of the colonisers. 200 years ago, people in India didn’t think they were going abroad when they moved from one princely state to another. Yet, a single cohesive Indian identity didn’t exist until the British came to the country. In fact one of the best things the colonisers ever did for India was to combine all its heterogeneous elements into one entity (something they managed to undo to a great extent when they partitioned India!!).

Indians have been citizens of a free democratic republic for less than seven decades. This might explain why a single cohesive Indian identity doesn’t override the regional identities.

Russia has been a cohesive unit for centuries and while the country underwent a series of transformations from the fall of the empire to the rise and fall of the Soviet Union and the advent of the Russian Federation. The concept of Russia was arguably formed in the form of medieval Rus in the 9th century (although this state comprised of Belarusians and Ukrainians as well).

India in its present shape needs to do some soul searching and find some sort of national glue that can be applied to all its citizens. It is next to impossible for the country to adopt one common language, the way Italian was in Italy, a country with very rich dialects that could be called languages in their own right, or Indonesia, where Bahasa was made a national language. India’s great languages need to be preserved and further developed to incorporate technology, and the idea of one language being chosen as the main national language is impractical. For obvious reasons, that national identity can’t be based on religion either. A lot of soul-searching needs to be done to answer this question of the Indian identity

Until then, it’s the collective pride of wins in cricket competitions and the success stories of Indian individuals and companies that will be the basis of forming some kind of unity.