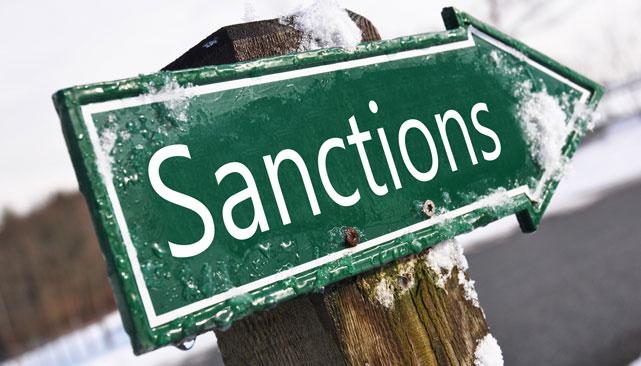 Sanctions will hurt all sides but the Russian threshold for hardship is a lot higher than the West’s. Source: shutterstock/legion media

Any economic sanctions imposed on Russia over its response to the crisis in Ukraine will also impact the United States and its followers. But while Moscow will dust itself off and move on, the recession-hit West needs the money desperately.

People in all free thinking countries should applaud the US call for sanctions against Russia. Why? Because it exposes the West’s complete inability to use the military option. Even if President Vladimir Putin sends all four divisions of the Russian Airborne Forces into Ukraine, the US and its allies can do very little in terms of retaliation.

As the US Congress leads the strident push for an economic boycott and the Western media keeps up the blitzkrieg of hatred against Russia, what is being ignored is that sanctions are a double-edged sword that will hurt everyone in a globalised economy. Sure, Putin will lose sleep but only because he’s laughing at the West’s clumsiness.

Face it, Russia is too big to fail

Only those who live under a rock – such as Senator John McCain, Victoria Nuland of the US Department of State and Ukrainians who have attained positions of power after a violent coup – will disagree that Russia is a wealthy country. Currently, Russia’s GDP per capita is the highest of all the BRICS countries. By 2020, the Russian economy will become the largest in Europe. Foreign direct investment into Russia rose by 83 percent in 2013 reaching $94 billion, the third highest total in the world after the US and China. That looks like a country everyone wants to do business with, not boycott.

And it’s too integrated

This isn’t 1980, when President Jimmy Carter – a peasant way over his head in events he couldn't begin to understand – led the US and its allies to impose blanket sanctions on the erstwhile Eastern Bloc. Today, on the other hand, there is a great deal of interdependence between the Russian and European economies.

The US business community has clearly stated it wants to avoid unilateral sanctions against Moscow because it believes competitors in Europe could gain market share as a result. “We in the business community do not want to be caught in the crossfire,” says Myron Brilliant, executive vice president of the US Chamber of Commerce.

Arnaud Leclerc, managing director of Swiss private banking firm Lombard Odier, says sanctions would harm the US. “In 2013, Russia exported goods worth $27 billion to the US and imported goods worth $11 billion from the United States,” he says.

Europe has its own interests to protect. The European Union currently ranks as Russia’s number one trading partner, accounting for almost 41 percent of all trade. Germany has invested heavily in Russia’s manufacturing sector while nearly 6,000 UK traders exported goods to Russia last year. Nearly 10 percent of Britain’s car exports are to Russia, and an even higher proportion of Germany’s.

The Russian oil and gas pipeline network – which is 259,913 km long and can loop around the Earth more than six times – is the lifeline of Europe. Germany gets half of its daily consumption of 2.8 billion barrels of oil from Russia mainly via the Druzhba pipeline through Belarus. In 2012, Russia accounted for 24 percent of all gas exports to Germany, 19 percent to Turkey, 11 percent to Italy, 6 percent to France, 6 percent to the UK, 10 percent to other countries in Western Europe and 24 percent to Eastern Europe.

If Ukraine blocks Russian gas, these supplies cannot be compensated for quickly. The alternative for Europe is to import Qatari gas. But this has a nasty downside – Qatar is one of the world’s leading exporters of Islamic fundamentalism and jihadi fighters to Syria. Every euro paid for Qatari gas goes to strengthen the forces that will one day come back to haunt Europe.

Gas blocking by Kiev has had positive spinoffs. The brand new Nord Stream pipeline, which bypasses Ukraine and the Baltic countries, transports Russian gas directly via the sea route to Germany. Any more trouble and it will mean the green signal for the South Stream pipeline, which will again bypass Ukraine. It willt then find itself totally out of the high-stakes hydrocarbons game and lose transit fees and subsidised gas.

Russia is not “dangerously dependent” on oil and gas

The Russian economy is focused on energy and mineral exports but it is certainly not “dangerously dependent” – as the Western media depicts it – on hydrocarbons. It misses the point that the demand for oil and gas is not seasonal or cyclic but permanent. With China and India showing no signs of cutting back on their energy consumption, life is a non-stop party for the world’s energy exporters.

Curiously, the words “dangerously dependent” are never used when it comes to describing the situation of NATO member Norway or the Gulf satellites such as Saudi Arabia, Qatar, Bahrain and the UAE, which live off exports of hydrocarbons.

Cornered bears are known to fight back

Russia has large reserves of dollars and is active in the US debt market. Currently, it holds $490 billion, the fifth largest reserves in the world. According to presidential adviser Sergei Glazyev, one option before Moscow is to abandon the US dollar as a reserve currency, or to figure out a way to use a new payments system that is not reliant on US dollars for international transactions.

Glazyev, who’s known to be close to the more nationalist members in the Kremlin, added that if the US freezes the accounts of Russian businesses and individuals, Moscow will recommend to all holders of US treasuries to sell their US government debt. Although his opinions were described as personal, ominously for Washington the USD Index fell marginally before recovering.

Because the dollar is the single biggest factor that ensures America’s dominant position, the currency’s debasement could hasten the inevitable end of its free lunch.

Glazyev may have been hinting at the India-Iran Rupee Trade Mechanism where New Delhi purchased Iranian oil with rupees and Tehran used those earnings to buy essentials from Indian merchants. Although the rupee and the rouble are not as freely tradable as the dollar, they are increasingly gaining acceptance around the world. China and Brazil are also been on giving the anti-dollar movement some momentum.

Russia could make America’s retreat from Afghanistan a hellish experience. A key supply line, known as the Northern Distribution Network – which brings food, water and war materials that keep America’s longest war going – runs partly through Russia or allied former Soviet republics. If Putin decides to shut down the network, the only alternative for the US military would be to be totally dependent on the Pakistan route. America’s nightmare scenario is to be trapped between the Taliban in Pakistan and the Afghan Taliban in the north.

Ways around the liquidity crunch

The West is aiming to impact the ability of wealthy Russian individuals to operate freely in the Western banking ecosystem. There are two reasons for this. “The US and other leading Western powers are focusing on individual, targeted sanctions because broader economic sanctions could directly harm Western businesses and lead Moscow to make good on its threats to retaliate against businesses from the countries pushing sanctions,” says the Wall Street Journal.

Secondly, Russian oligarchs close to Putin routinely keep their assets in Western banks. Those leading the push for sanctions hope the Russian business and political elites fearful of losing their vast foreign holdings will shift their loyalties away from Putin.

That ship has sailed. It is true the Kremlin once followed the policy of looking away from corruption in exchange for loyalty. But that was when Putin and his team were political newbies and wanted powerful backers. Today, Putin is more worried about public opinion than the oligarchs' loyalties.

At any rate, if Russian firms are barred access to Western banks, there’s always China. With reserves of more than $3.2 trillion, Beijing is becoming a key player in the lending industry. India’s Reliance Power for instance took a $1 billion loan from three Chinese banks for a power project.

Prepared for the worst

Sanctions will hurt all sides but the Russian threshold for hardship is a lot higher than the West’s. Plus, it’s certainly not the best of times for Westerners to bear further agony. In Greece, for instance, people are abandoning their young children in the streets; one in ten people in Ireland cannot afford a meal; while British women in the inner cities are eating once a day so their children can be fed. Across the Atlantic, over 50 million Americans face chronic hunger.

Under these circumstances, when every trade dollar counts, boycotting a large trading partner is being needlessly self-destructive.