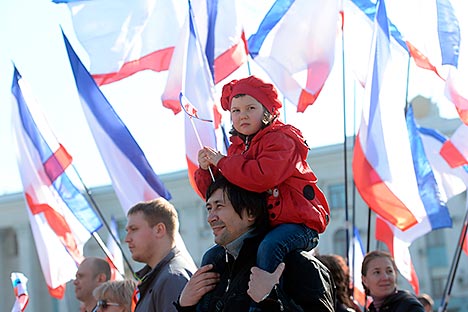 The outcome of Crimea referendum of March 16 is obvious, but it would be immature to jump to conclusions about its immediate annexation by Russia. Source: Mikhail Voskresensky / RIA Novosti

Ukraine is just a pawn in the big-power chess game between resurgent Russia on one side and the United States of America along with its European Union and NATO allies on the other.

The easiest explanation of the ongoing events in Ukraine, historically a fringe of rival empires, is to project a crisis between Moscow and Kiev and make it look like international efforts are on to bring the two to the negotiating table by the ‘pre-eminent’ superpower.

Unfortunately, the situation is not that simple and Ukraine, which declared independence in 1991 and initiated the revocation of the Union Treaty to disband the USSR, has today become just a pawn in the big-power chess game between resurgent Russia on one side and the United States of America along with its European Union and NATO allies on the other.

'International law' is the term being used to nailing Putin's Russia, but we have to be realistic. International law is a fig leaf for those who claim to be on “the right side of the history.” Especially after the fragmentation of Yugoslavia and recognition of the breakaway Serbian province of Kosovo by the rampaging winners of the Cold War, those who virtually destroyed Iraq, Afghanistan and Libya as nations with history, much longer than of the USA.

What is happening around Ukraine is geopolitics, which has nothing to do with the international law.

Simply put, Putin offered $15 billion hard cash to bailout Ukraine in distress in exchange for its close links with the Moscow-led Customs Union, basically designed to revive the trade and economic cooperation between the former Soviet republics. Seeing hard cash, Ukrainian President Viktor Yanukovich took a U-turn on an association pact with the European Union, which had asked Kiev to do away with the legacy of Soviet-era social benefits and its population to tighten their belts before getting dosed funds in its empty coffers.

So, a democratically elected president was removed with the help of violent street protests and a government loyal to the West was installed, which would eventually steer Ukraine into NATO. Did the US and its allies want Putin to swallow the bitter pill? It looked that their next stop was Moscow to get rid of Putin, “the thorn in the thigh,” in a similar scenario.

The recent New Delhi-Washington spat over the arrest of Indian diplomat Devyani Khobragade in New York for alleged visa fraud is still fresh in public memory. Indian diplomacy was never so fierce and consistent in its fight to deprive the Americans of unilateral privileges enjoyed by them in India after it became clear that Khobragade underwent a cavity search by the police.

The shameless coup staged by the US and allies in Kiev could only be perceived by the Kremlin as Russia's cavity search and its reaction was nothing but natural.

In this context, it would be appropriate to recall what once great 19th century German Chancellor Otto von Bismarck had said about the Russian Empire: “Don't fight with Russia. Your cunning will be responded by unpredictable stupidity of Russians.”

In essence, the US and EU meddled in the internal affairs of a democratic country and brought about a regime change by ousting a democratically elected president with the help of armed street mobs. They were well aware of the deep fault line dividing Ukraine, virtually raped by kleptocratic regimes in over two post-Soviet decades.

Now they are trying to project it as a conflict between Moscow and Kiev and prodding the Kremlin to sit at the negotiation table with the new Ukrainian government, legitimacy of which has been questioned by Russia.

The US and its allies are now trying to nail Putin for fomenting crisis by inciting the secession of Crimea and unrest in the Russian speaking parts in the south and south-east of the former Soviet republic. Stern warnings are being issued about the price the Kremlin will have to pay.

Russia, especially Putin's Russia is not a country, which can be intimidated by threats from across the Atlantic. For Russia, stakes are too high as they involve not only its civilizational roots and identity, but also shape a new geopolitical paradigm.

Unfortunately, the Western leaders instead of owning responsibility for creating the crisis in Ukraine, which led to ouster of a democratically-elected president and installation of a government heavily influenced by ultra-nationalist and extremist forces hostile to Russia, continue to press for the implementation of the plot mentioned in infamously leaked conversation of Assistant Secretary of State Victoria Nuland with the US ambassador in Kiev.

However, they have let the genie out of the bottle.

The outcome of Crimea referendum of March 16 is obvious, but it would be immature to jump to conclusions about its immediate annexation by Russia.

One cannot rule out that an independent Crimea, with Moscow's military and economic guarantees could become a bargaining chip in future dispensation in Ukraine, through its federalisation and 'Finlandisation.' This will be a win-win situation for all the parties and prevent the expansion of the US-led NATO bloc right into the front lawn of Russia.