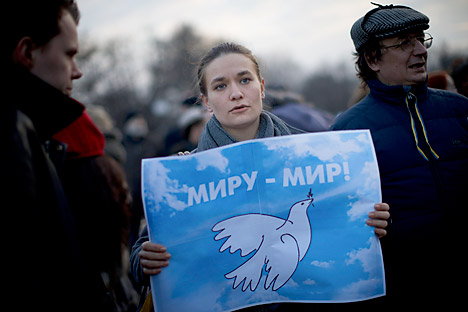 'Peace to the world' - reads a poster. Source: AP

The ongoing crisis in Ukraine and the exchange of increasingly politicized rhetoric has brought with it a growing sense of unease and concern about the future. RBTH’s editor for the Western Hemisphere talks about how the atmosphere in Russia has changed from an American perspective.

Although I was 11 when the Berlin Wall fell, I don’t really remember the Cold War. I never really thought of people from other countries as enemies, or even different in a substantial way – they were just people. Maybe this is because I was raised in a city that was 60 percent African-American by parents who made a concerted effort to teach my brother and me that all people were equal. Maybe it’s because my formative years were the 1990s, when economies all over the world were growing and anything seemed possible.

I have been fortunate enough to live and travel all over the world and have tried to approach each experience by accepting whatever foods, traditions and living conditions that were thrown at me as totally normal for the situation and not as something exotic and surreal that I would try once and then tell as an amusing anecdote when I was back home.

Crimea vote a reality check for the West

I have particularly felt that life in Russia was simply a different kind of normal from American life. In fact, life in Russia for me was just normal. Period. When my friends would say something on Facebook about how exciting my life must be as a journalist in Moscow, I would counter, saying that my life here was exactly the same as my life in Washington, DC. Every day I got up, went running, took the kids to school, went to work, cooked dinner, fell asleep in front of the TV. It was normal.

Then there was a revolution in Ukraine. The day Russia’s Federation Council authorized President Vladimir Putin to use troops to defend Russian interests in Ukraine, I was driving down one of Moscow’s main streets thinking that this must have been what it was like during the Cold War – somewhere else, Russian and American interests were fighting, but for ordinary people from day to day nothing changed at all.

Over the past few weeks, however, it has. As the Crimea referendum neared and the rhetoric ramped up, I found that I no longer trusted my judgment as to what kind of story was ok or not to commission from a freelancer. I dreamed about being fired because the headline I wrote on some story about Ukraine wasn’t nuanced enough. I worried that what made me an asset to my company – my very American-ness and perspective of the American market – was more of a liability.

Now that the vote has taken place and the threat of sanctions has become a reality, I am hearing more and more from friends and colleagues about how they are worried about being denied U.S. visas; about how they are concerned about the falling ruble and how it will affect plans to buy a car or take a European vacation. And although I try to argue that I am affected, too – maybe even more because if my visa were pulled or the U.S. closed off Russian access to international banks, I would have to leave my entire life in a matter of days – the implication is that my country is at least partially to blame for this situation.

My daughter came home from school a couple of months ago and asked if I ever felt that, when anyone in a group said anything about the United States, everyone’s eyes were on me. I told her I felt that way all the time – and we talked about the times something like this had occurred. They mostly involved American pop culture or the U.S. hockey team. Now, however, when anyone says anything about the U.S. and everyone looks at me, it doesn’t feel so benign.

Are we headed for a new Cold War? I don’t know. But I do know that decisions being made to punish Putin or punish the United States or punish Ukraine are really just punishing ordinary people who may have a wide range of views on geopolitical events but who mainly just want to go about their completely normal lives.