All guns firing: Russian arms trade on the rebound 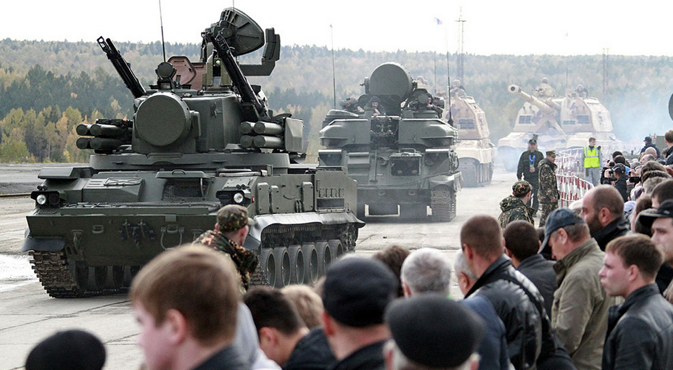 Bankrolled by easy finance and led by an export or perish policy, Moscow’s increasingly competitive defence companies are once again driving up the sales charts.

Western weapons manufacturers waging an uphill battle to drive up revenues are finding their market share eroded by a potent new competitor – Russia.

The Stockholm International Peace Research Institute (SIPRI) in its latest report “Trends in International Arms Transfers – 2013” says Russia’s exports of major weapons increased by 28 per cent between 2004-2008 and 2009-13. Moscow’s increasingly competitive defence companies delivered weapons to 52 countries in 2009-13, with more than half of those exports going to just three countries: India, which purchased a hefty 38 percent of Russian weapon exports, China (12 percent) and Algeria (11 percent).

According to the report, authored by Siemon T. Wezeman and Pieter D. Wezeman, senior researchers with the SIPRI Arms Transfers Programme, Russia was the largest exporter of ships in 2009-13, accounting for 27 per cent of all such deliveries. This included the delivery to India of the aircraft carrier INS Vikramaditya and the only nuclear-powered submarine, INS Chakra, exported in this period. Aircraft accounted for 43 percent of Russian arms exports in 2009-13, including 219 combat aircraft delivered in this period.

While Russia is No.2 on the list – ahead of Germany, China and France – it is well behind the United States, which exported to as many as 90 clients. Washington’s biggest clients are Australia, which bought 10 percent of all American weapons exports, South Korea (10 percent) and the UAE (9 percent). Aircraft made up 61 percent of the volume of US deliveries in 2009-13, including 252 combat aircraft.

(Since the volume of deliveries of arms can fluctuate significantly from one year to the next, SIPRI uses a five-year moving average to give a more stable measure of trends in transfers of major weapons.)

The surge in Russian arms exports is nothing less than a Houdini act in the backdrop of the catastrophic declines during the nasty nineties. According to SIPRI estimates, in 1987 the Soviet Union accounted for 38 per cent of the worldwide trade in major conventional weapons. By 1992 the Russian share had declined to 12 percent of the world total and in 1994 (the lowest point of deliveries of major conventional weapons from Russia) to only 3 per cent.

“The dissolution of the Warsaw Treaty Organization (WTO) and the Council for Mutual Economic Assistance (CMEA) effectively ended the system of military-technical cooperation within the state socialist countries of East-Central Europe. The subsequent dissolution of the Soviet Union itself broke many inter-enterprise ties within what had been an integrated production system.”

Adding to these woes are two major bottlenecks. The vast network of weapons factories in the country cannot be supported by the limited demand generated by its own defence forces. Even President Vladimir Putin’s $750 billion spending push from 2007-2020 while sounding big translates into just $57 billion annually.

Exports are the alternative. But here, again, there is a peculiar problem. Most countries that import large quantities of arms have close political and military ties with the United States. These include the Gulf sheikdoms which in many cases import arms – which they plainly do not need or their poorly-trained personnel cannot operate – simply to keep American lawmakers (with weapons plants located in their constituencies) happy.

The United States is clearly the behemoth of the arms industry, with a defence budget somewhere between $500 billion and $600 billion in 2013. American companies Lockheed Martin, Boeing, Raytheon and Northrop Grumman each sold arms worth $21 billion to $36 billion in 2011 alone, mostly domestically. Exports are just the icing on the cake for them.

But for Russia exports are bread and butter. “For post-Soviet Russia, the arms trade became a major source of revenue for the defence industry, which for two decades virtually stopped producing for the domestic market,” says Dmitri Trenin, director of the Carnegie Moscow Center.

What makes it a formidable challenger in the military businesses is Moscow’s willingness to bankroll the country’s arms sales campaigns worldwide. “The problem of finding financing in cases where countries cannot make payments using reserves is also being addressed through the growing involvement of Russian banks in the management of credit related to arms exports,” says SIPRI. “Most of the new financial-industrial groups include large banks, some of which have enough capital to lend to foreign governments even in cases where large projects are being considered.”

But this time, Moscow won’t be doling out largesse to potentially delinquent clients. President Putin has said he would pursue the arms export programme on “market principles” and not copy the Soviet Union's practice of giving weapons on loans that seldom got repaid.

“Being ready to export sophisticated weapons on soft loan terms and other flexible financial deals give Moscow an unparalleled edge over other defence exporters,” says a UPI report. “China has the cash but not the technology that can match Russian hardware; Europe needs the cash from arms export and North America's military exporters have neither the deep pockets of Putin's government structure nor the freedom exercised by Moscow.”

“US arms exporters, in contrast, are unable to do military handouts and most remain at the mercy of congressional wrangles, many triggered by partisan politics. Their constraints in relation to congressional safeguards are a reason why the exporters are finding it hard to reignite Latin American interest in US hardware and software.”

Russians are also quick on the draw. Last year, when the United States slapped sanctions on the Egyptian military for overthrowing the fundamentalist Muslim Brotherhood, Moscow stepped in. Weapons cartel Rosoboronexport said it had relayed a proposal to sell military helicopters and air defence systems to Egypt. Moscow also offered to upgrade aging Soviet-era weapons. “There is never a vacuum on the international arms market,” said Rosoboronexport’s Mikhail Zavaliy. “If one supplier goes away, then another one appears.”

The Iraq contracts have been won despite the fact that Baghdad is now strongly under American influence. In fact, a deal to buy MiG-29 interceptors was recently scuttled, perhaps under US pressure.

There’s work to do

However, it won’t be all smooth sailing. “Russia’s arms industry is gradually re-emerging from the ruins of the Soviet industrial era,” says Perlo-Freeman, the director of SIPRI’s Military Expenditure and Arms Production Programme. “The industry is still plagued by outdated equipment, inefficient organisation and widespread corruption, which will continue to limit Russia’s ability to compete technologically with the West.”

The defence industry being a key segment of the Russian economy – and one of the few sectors in which Moscow is competitive internationally – it will continue to receive special treatment. As Putin told the Commission on Military-Technical Cooperation, exports allow Russian defence enterprises to create jobs, update the material and technical basis of production, introduce advanced technology, and build a firm foundation for the future.