Moscow’s eastward turn is not a reaction to sanctions 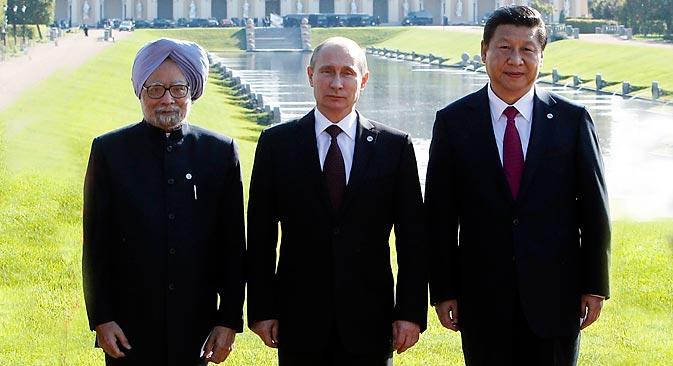 Russia has a long-term economic cooperation strategy with India and China. Source: Reuters

Russia’s decision to enhance economic ties with India, Vietnam, South Korea and China are part of a well-thought of strategy that was out into place long before the current Ukraine crisis.

It’s obvious that a large number of wealthy businessmen and oligarchs in Russia are worried about the prospects of economic sanctions imposed on the country by the US and EU. Many members of the elite have property, business interests and investments in the West and prefer to holiday there. The threat of sanctions must really come as a shock to a large number of these people who got rich after the 1998 rouble crisis and have not seen any kind of major impediments to jet-setting to Western Europe and the United States till now.

In 1998, when India conducted nuclear tests, the world was united in condemning the country and the West was quick to impose economic sanctions. In fact, the Boris Yeltsin administration also condemned India’s actions in a milder manner, but refused to join the sanctions bandwagon. The tests were conducted a year after the East Asian financial crisis and India looked like it had strong economic fundamentals at that time. When the West realised that the sanctions neither slowed down India’s economy nor coerced it to sign the Nuclear Non-Proliferation Treaty and the Comprehensive Test Ban Treaty, the sanctions were lifted and the capitalist carpet-baggers made a dash to set up shop in the country. Given the way economic interest overrode moralistic stances of the West in the case of India, the Russian business community should not particularly worry about the long-term impact of sanctions, but at the same time look at the opportunities that they have in the emerging economies.

International media outlets have inaccurately portrayed Rosneft CEO Igor Sechin’s visit to India, China, Japan, South Korea and Vietnam as some sort of knee-jerk reaction to the shadow of economic sanctions on Russia.  Greater economic engagement with the East has been a part of Vladimir Putin’s agenda for the last decade.  With China, Russia aims for a bilateral trade target of $100 billion in 2015. The wheels were set in motion right from the time that the border dispute between the two countries was signed in 2004. Asia-centric policies are not new to the Kremlin and the hosting of the APEC summit in Vladivostok in 2012 was aimed at boosting the country’s profile in the continent.

One of the cornerstones of Putin’s foreign policy since he became president in 2000 is the setting up of a strategic partnership with India. Besides bringing the countries closer together diplomatically, it paved the way for greater economic engagement. This includes greater cooperation is government to government projects like the Kudankulam Nuclear Power Project, as well as active efforts to engage the private sectors of both countries to step up trade.

The Customs Union of Russia, Belarus and Kazakhstan has been negotiating free trade agreements with Vietnam and New Zealand and a Comprehensive Economic Cooperation Agreement with India. Kazakhstan’s proposal to work on a similar agreement with Turkey is also under consideration. Moscow even took the main initiative in converting BRIC from an investment acronym into an economic grouping that added South Africa.

It’s important for Russia to expand trade with Asian countries since the chances of a political confrontation with its partners in the continent are highly unlikely. China seems to be satisfied with the way its territorial disputes with Russia were settled and the ridiculous theory of a Chinese demographic invasion of the Russian Far East has been rubbished by most rational thinkers.

Can anyone realistically foresee a Russia-Japan war over the Southern Kuril Islands? Tokyo claims the islands, which it refers to as the Northern Territories, but it doesn’t stifle trade and economic engagement with Moscow and doesn’t blackmail the country in international forums.

Would India ever support any kind of international isolation of Russia? After Ukraine’s so-called Orange Revolution in 2004, when Vladimir Putin faced increasing global isolation, India extended the red carpet to the Russian president, annoying a lot of western governments in the bargain. More recently, New Delhi refused to support sanctions against Moscow and was one of the first countries to publicly acknowledge that Russia had legitimate interests in Crimea. No matter how much India’s Diaspora in the United States tries to push for the ‘motherland’ to move into Washington’s orbit, such a scenario is unlikely.

Russia’s Asian allies and partners in groupings like BRICS are very unlikely to use economic blackmail to push political agendas. These countries also maintain a distinct distance from Russia’s immediate neighbourhood and are not in the business of encouraging and financing often-dubious opposition movements. They are also not part of a misguided military alliance whose raison d’être in the 21st century is the financial interests of the large and influential arms manufacturing lobby.

The current geopolitical climate presents a wonderful opportunity for both state-run and private Russian enterprises to explore new and profitable markets and spread the country’s global economic clout. This is precisely where the rising economic powers of Asia come in to play.