Russia is back on the Indian radar 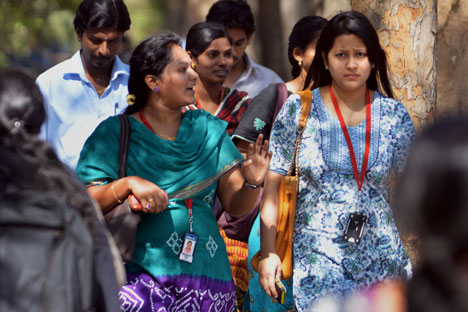 Many middle class Indians would like a more powerful Russia. Source: AP

As the spectre of a new Cold War looms large on the horizon, Indian diplomacy, though a bit uncomfortable, seems to be ready to face the new challenges.

How to bring post-Soviet Russia back on Indian radar was one of the topics at last May's brainstorming session organised in Moscow by the State Institute of International Relations (MGIMO) jointly with the Indian Council of World Affairs (ICWA). This has paramount importance for cementing the bilateral 'privileged' strategic partnership at person-to-person level. One of the respected Indian speakers said that Russia needs a “game-changer,” something like launch of first Sputnik or Yuri Gagarin, to win the minds and hearts of Indians.

During my earlier travels across the country, I found out that many people on the road, especially under twenty, hardly knew anything about Russia. Those, who had heard of it, said it was a country “run by the Mafia, with high crime rate and its President Putin stifling democracy.” People above 40 would often talk about “bad” (Mikhail) Gorbachev and (Boris) Yeltsin, blaming them for destroying the USSR. President Vladimir Putin did enjoy respect for his efforts to rebuild Russia through political stabilisation, however, it was not enough for re-emergence of new Russia's wholesome image on the Indian radar to catch the imagination of public at large.

After swift and bloodless reunion of Crimea with Russia, however, the situation has radically changed and President Vladimir Putin has earned reputation of the grave digger of the US-led unipolar world order.

Recently I had to travel by car through extensive areas in the so-called cow-belt around the Indian capital New Delhi covering the states of Haryana, Uttar Pradesh, Rajasthan and Madhya Pradesh. While talking to common people at roadside tea stalls and dhabas (eateries) - usually the places where by just asking a few questions you can get the full analysis of the popular mood, political affiliations and aspirations of the particular  region - it was a pleasant surprise that although most of them were not aware about the intricacies of the Ukrainian conflict or of Crimea's historical past, but they were full of praise for the Russian leader for “challenging America and showing Washington its place.”

“We also need a Putin for India,” this was a common sentiment expressed by most of the people I talked to. Putin's Crimea push is acting as tailwind in the sails of Bharatiya Janata Party's prime ministerial candidate Narendra Modi.

Many educated people of the middle and senior age groups, hope that with the emergence of an assertive Russia a semblance of bipolarity with checks and balances in the global polity will shape a new world order based on multilateral efforts.

The Indian public opinion mostly remains unaffected by the anti-Russia coverage of the Ukraine developments by the mainstream Western media, also partly echoed by the local media. Specially on the backdrop of recent US-Indian spat dubbed as 'Nannygate' involving strip search of Indian diplomat Devyani Khobragade in New York.

As the spectre of a new Cold War looms large on the horizon, Indian diplomacy, though a bit uncomfortable, seems to be ready to face the new challenges. There is a hope that after the change of occupant at 7, Race Course Road, New Delhi following the General Elections to be completed by mid-May, India will have a robust foreign policy more focused on national interests.

UN General Assembly's Ukraine vote was not only the failure of the US policy of isolating the Kremlin as a punitive action against Moscow for returning Crimea back into its fold, but the 11 countries voting against and 58 nations including Asian giants India and China abstaining in it, also sends a loud and clear message that spirit of non-alignment was still alive after more than two decades of a unipolar world order now abruptly ended by the 'arrival' of resurgent Russia.

President Vladimir Putin has lauded India for its “balanced and restrained” stand on Russia's takeover of Crimea. Although eyebrows were raised in Western capitals at the Indian reaction, at a recent penal discussion in New Delhi former Foreign Secretary Lalit Mansingh underscored that tied with strategic partnership pacts with Russia and some other friendly countries, India is not a “non-aligned,” but a “non-allied” nation.

Election manifestos of all the parties mention about foreign policy priorities of economic and technological growth in this spirit. When a West European diplomat pointed that India's these interests would be best served through close alliance with the US and European Union than with Russia and asked why New Delhi has sided with Moscow, Mr Mansingh curtly replied: “In foreign policy there is also something called national interests.”

For over five decades Russia has remained India's most reliable and tested partner and whoever comes to power in New Delhi after the General Elections, relations with Russia will be further developed and deepened, this is a common public sentiment and aspiration in India.

The new scenario, when Russia is under the threat of crippling sanctions by the West, also provides ample opportunities for Indo-Russian economic and technological cooperation. The main lacuna is filled: Russia is back on Indian Radar as a global power which has ended the era of unipolar world order.