Backing the boys in blue: A trip to the Petrovsky Stadium 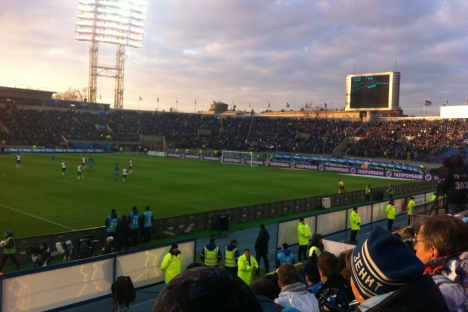 Once inside, you can mill around the stadium with the other fans and enjoy the festive atmosphere. Source: Christopher Hamilton

Attending a Zenit St. Petersburg soccer game is a colorful and atmospheric experience. RBTH’s web editor Alastair Gill has been going to matches at the city’s Petrovsky Stadium since 2001. Here he talks about what you can expect from a typical match day and describes his last Zenit match.

Living in St. Petersburg means that there is never a shortage of things to do at weekends, whatever the season. Exhibitions, bars and cafes are constantly opening and closing, and there is a vast array of world-class museums to choose from – besides the pleasure of simply strolling around the city’s parks, canals and embankments.

One of the things I try to do at least once or twice a year is to go and watch a Zenit match. Zenit St. Petersburg is the city’s iconic soccer team and one of Russia’s leading clubs – though it hasn’t always been that way. When I first lived in the city back in the hazy days of 2001, the team were chronic underachievers, having lifted the (then-Soviet) cup just once, in 1944, and having won a sole league championship in 1984.

Nonetheless, by 2001 they were already emerging as title challengers, and after Gazprom bought a controlling stake in the club in 2005, the team’s fortunes were transformed. Since then the team has won the Russian Premier League on a number of occasions, and even achieved European glory in 2008 by winning the UEFA Cup.

Last week an old friend and I decided that it had been too long since we’d last been “to the Petrovsky” and booked tickets for Saturday’s home match against FC Krasnodar. The team from Russia’s south were seventh in the league at the time, while Zenit were one point behind Lokomotiv Moscow at the summit of the league, having recovered from a slump in February and fired Italian manager Luciano Spalletti.

The new man at the helm is Portuguese coach André Villas-Boas, who led FC Porto to a Portuguese league title and UEFA Europa League glory in 2011 before an ill-fated move to England, where he struggled to imprint his philosophy at Chelsea and Tottenham.

For those who’ve never had the experience of going to a football match in Russia and wonder what it’s like – well, it’s really not that different from attending a match in Europe, though the setting and atmosphere – as well as the security measures – are rather unique.

The anticipation begins on the journey by metro to the nearest subway station to the stadium, Sportivnaya. At every station, fans filter onto the train, draped in banners, shirts and scarves in Zenit’s colors: blue, white and azure. Looks of solidarity are exchanged as the train gets closer to its destination.

Zenit’s Petrovsky Stadium is located on a small island beside one of the branches of the Neva River, next to a bridge linking the city’s Petrograd district with Vasilevsky Island. It’s an old Soviet open stadium with curved ends built in the Stalinist style, with a palisade of columns around the exterior. The views over towards Vasilevsky Island and the river are quite striking from outside the stadium. 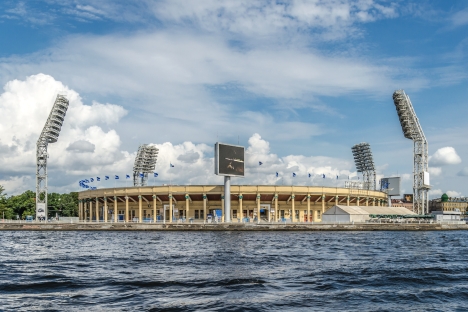 On match days the police – and there are whole legions of them – set up barricades and fences on the street leading to the stadium and filter the fans through in controlled numbers. Once through the police cordon, you cross a bridge to the stadium and pass through a second barrier, where you are frisked and asked to open your bag so that the police can check you’re not attempting to smuggle in any bottles, weapons or firecrackers.

My life in Russia: Richard Pearce from Solihull, England

Only after this second cordon can you actually reach the turnstiles, where a cursory glance at the ticket is enough to get you waved through into the area surrounding the stadium. Here you pass through yet another line of police officers, where you may or may not be frisked.

Once inside, you can mill around the stadium with the other fans and enjoy the festive atmosphere. There are small stands selling souvenirs and fan memorabilia and a number of hot-dog kiosks. There is no alcohol on sale these days but you can buy alcohol-free drinks. I usually pick up a match program so I have a guide to the players in the team and their shirt numbers, and can check up on league positions and other statistics.

When the match is due to begin, fans file into the stadium itself and take their seats. The stands along the two sides of the pitch offer the best view, but if it’s atmosphere you’re looking for, the sections behind the goals are a better bet.

This where the hardcore fans, or the “ultras”, as they are known, stand. Many of these fans might not be the kind of people you’d want to exchange political views with, but they certainly create most of the atmosphere inside the stadium, keeping up a barrage of noise and song throughout the match and waving giant flags and banners. 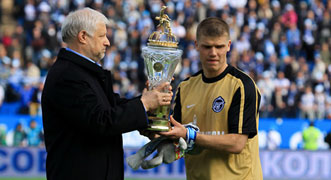 I’m always amused by listening to the comments made by spectators sitting around me, some of who make their feelings on proceedings quite clear in language that is best described as colorful.

So what about Saturday? Well, Zenit were dominant for the first 45 minutes, spending most of the game inside the Krasnodar half, but only had one goal to show for their labors by the break – a long-range free kick after 21 minutes from monster Brazilian forward, the appropriately-named Hulk. The Krasnodar keeper tried to punch the ball away, but misjudged the pace of the shot and could only deflect it into the net.

My friend and I were several minutes late returning to our seats after half time and missed a Krasnodar equalizer just after the break, but Zenit then put their foot on the gas, taking the lead again through a second Hulk strike after 64 minutes, before Venezulan forward Salomon Rondon extended the Petersburg team’s lead with a rifled drive in the 81st minute.

The undisputed highlight of the match, however, came in the third minute of stoppage time, when Hulk, clearly on a mission of his own, chested down a high pass 25 yards out before turning. Surging forward, he beat three defenders before lashing a fierce shot inside the goalkeeper’s near post to claim his hat-trick and make the final score 4-1, firing Zenit to the top of the league.