A division of labour for Afghan stability 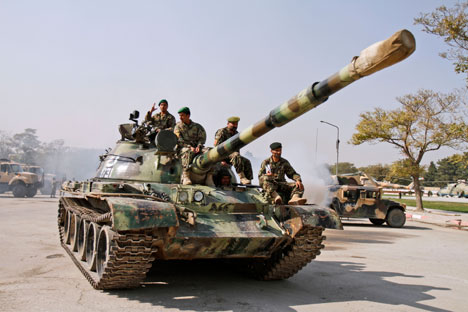 The consignment of Russian supplies to Afghanistan will include artillery guns, helicopters and armored vehicles. Source: AP

In political terms, India has virtually stepped in to help buttress Afghanistan’s “non-aligned” status by creating space for it to exercise the freedom of choice necessary to diversify its partnerships in the defence field, instead of putting all its eggs in the American or NATO basket.

A full weekend has passed since the news report appeared and there hasn’t been any denial yet from either New Delhi or Moscow. Its veracity, presumably, can be taken for granted.

In the din and bustle of the ongoing Indian elections, not much attention was paid to the news item in the Indian Express regarding “a far-reaching deal” between Delhi and Moscow to undertake a joint enterprise to supply arms to the Afghan armed forces whereby India will pay for the equipment that will be sourced from Russia. Yet, the fact remains that a new template of regional security is appearing and its implications are profound.

The Indian daily reported that under the new arrangement worked out between Delhi and Moscow, the first consignment of Russian supplies to Kabul is already being delivered. The Indian financing package reportedly enables Kabul to procure Russian-made artillery guns, helicopters and even armored vehicles including tanks.

To be sure, the Indian thinking is not something startlingly new. Even during the anti-Taliban resistance in the late 1990s, Delhi had provided funds to the Northern Alliance groups to effect procurements from other regional powers. This has been a pragmatic approach demonstrating India’s political will (and grit) to strengthen the forces of moderation in Afghanistan, while also overcoming the formidable obstacles of geography that impeded India’s direct, active intervention in Afghanistan in military terms and India’s own inherent limitations in being an arms supplier. In fact, this has been the Indian approach broadly toward Afghanistan even in the “pre-Mujahideen” era under the communist rule. Then, as now, India provided training facilities for Afghan military personnel and the bottom line consistently was that there could be no “boots on the ground.”

However, admittedly, the context of regional politics is vastly different today. In the prevailing geopolitical backdrop of the Eurasian developments, India is no doubt making a significant political statement by tying up with Russia a “division of labour” to stabilize Afghanistan, predicated on the fundamental belief that the strategic partnership between the two countries remains a major factor of regional security and stability.

The collective Indian-Russian-Afghan effort actually is taking shape even before the signing of the US-Afghan Bilateral Security Agreement [BSA], which would have the desired effect (from Washington’s viewpoint) of projecting the Pentagon as the principal provider of security in the Hindu Kush. The BSA provides for military assistance by the US to Afghanistan, whereby the latter is expected to source the equipment for its armed forces in such a way that the two countries will come to enjoy military-to-military “interoperability” in due course. Put differently, Washington expects that the Afghan armed forces will be incrementally equipped with NATO standard equipment.

Curiously, the BSA expressly stipulates that for any procurement of weapons from outside the NATO countries, Kabul would have to arrange its own funding (which in the present state of the Afghan economy is a tall order). That is to say, the US’s strategic objective is to prepare the ground over the coming years for Afghanistan to become a full-fledged partner country for the NATO even as the western alliance evolves into a global security organization. This is a clever strategy insofar as it aims at circumscribing, atrophying and even eliminating the scope for Afghanistan’s participation in exclusively regional security organizations such as, for example, the Collective Security Organization or the Shanghai Cooperation Organization.

In political terms, therefore, India has virtually stepped in to help buttress Afghanistan’s “non-aligned” status by creating space for it to exercise the freedom of choice necessary to diversify its partnerships in the defence field, instead of putting all its eggs in the American or NATO basket. Conceivably, there is meeting ground between India and Russia here, since Moscow also would appreciate the importance of Afghanistan emerging on the regional strategic landscape as a strong, independent and non-aligned country. Again, the Indian approach is likely to be seen in a favourable light even by China, Iran and the Central Asian countries, which are equally interested in the stabilization of Afghanistan and in that country regaining its sovereignty in a near future.

The underlying Indian assumption here is that the crucial factor in the stabilization of Afghanistan will be the willingness of the international community to provide that country with the resources that are critically needed for its native capabilities to be strengthened and expanded. There is widespread appreciation in India that contrary to the doomsday predictions by the western analysts, Afghan armed forces have acquitted themselves well in the recent period since the US and NATO forces gave up their “combat role”.

The fact that the Afghan presidential election on April 5 passed off without any major hiccups on the security front provides an indicator of how the stabilization of Afghanistan could be best achieved by enhancing the country’s innate capabilities, obviating the need altogether for any long term foreign occupation of that country by the NATO, leave alone for the establishment of the US military bases for that stated purpose.