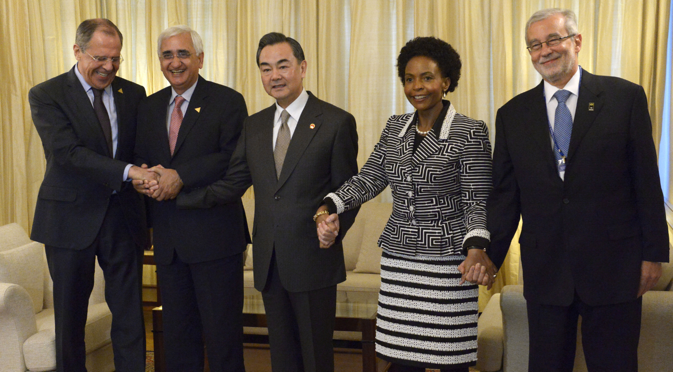 The BRICS economies are collectively worth around $12 trillion, and will surpass the size of the US economy which is approximately $15 trillion, by 2015. Source: Eduard Pesov / RIA Novosti

The five-nation group is no longer an emerging group but a powerful agglomeration that is setting down the rules of global economic engagement for the coming decades.

In 1983 Belgian economist Paul Bairoch presented a detailed study of the world economy that caused a furore in Western academic and political circles. In ‘Economics and World History: Myths and Paradoxes’ he said that in 1750 India’s share of global GDP was 24.5 percent, China’s 33 percent, and the combined share of Britain and the US was 2 percent.

Shaken by these facts, the Organisation for Economic Cooperation and Development, a largely Western club, constituted a Development Institute Studies under professor Angus Maddisson of the University of Groningen to investigate Bairoch’s claims.

The data Maddison compiled affirmed – what nearly all Indian school children knew but was mysteriously unknown to the West – that India and China were the biggest economies in the world for almost all of the past 2000 years. His figures showed India was the leading economic power of the world from the first year of the millennium till 1700 – that’s 18 of the last 20 centuries. India had 32 percent share of world’s GDP in the first 1000 years and 28-24 percent in the second millennium till 1700.

Since Bairoch and Maddison presented those paradigm shifting studies, things have progressed at warp speed. According to the International Monetary Fund, last year was the first in which emerging markets accounted for more than half of world GDP on the basis of purchasing power. Four large countries of the BRICS group – Brazil, Russia, India and China – are today the only $1 trillion economies outside the OECD and are also four of the 10 largest national economies in the world.

Strength and speed of growth

Much as Western outfits such as the New York Times would like to keep repeating the BRICS are fragile, it is abundantly clear the five-nation group has been the engine that has rescued a flat-lining global economy. The international consultancy Grant Thornton says BRICS are no longer emerging but in a different class just below the developed ones. Jim O’Neill, who coined the term BRIC, says it’s “idiotic and insulting” to call them emerging economies. He argues these economies are “increasingly the driver of everything positive in the world economy” and that they should be called “growth markets.”

A PriceWaterhouseCoopers (PwC) study titled ‘World in 2050’ says the collective strength of the BRICs economies is of ever increasing importance to the strength of the global economy. “Whilst mature economies across the globe grapple with towering budget deficits, anaemic growth and rising unemployment, the BRICs are expanding rapidly, lifting people out of poverty and driving the global economy. The manner in which leaders in the troubled eurozone recently pleaded with these markets for funds to help alleviate the sovereign debt crisis marks yet another definitive step in the transition of economic power from ‘west’ to ‘east’.”

How the world will turn

PwC says China is projected to overtake the US as the largest economy by 2017 in purchasing power parity (PPP) terms and by 2027 in market exchange rate terms. India should become the third ‘global economic giant’ by 2050, a long way ahead of Brazil, which is expected to move up to fourth place ahead of Japan. Russia could overtake Germany to become the largest European economy before 2020 in PPP terms and by around 2035 at market exchange rates.

In areas like ICT, biotechnology and nanotechnology, China and India will play an increasing role in these developments in future decades. This will further fuel their catch-up process with the more sluggish advanced economies.

Decline of the dollar

Twenty years ago, travellers wanting to exchange roubles or rupees would have been welcomed only at the international airports of the countries that issued these currencies. Today, Indian rupees can be exchanged at small banks in Australia and New Zealand. The acceptance of any currency is simply a sign of the confidence in the issuing country’s economy and trade.

In a paper titled ‘The Renminbi Bloc is Here’, Arvind Subramanian and Martin Kessler of the US-based Peterson Institute for International Economics provide a dramatic picture of how the RMB is growing in strength while the US dollar weakens.

“The RMB has now become the dominant reference currency in East Asia, eclipsing the dollar and the euro….The currencies of South Korea, Indonesia, Malaysia, the Philippines, Taiwan, Singapore, and Thailand now more closely track the RMB than the dollar. The dollar’s dominance as reference currency in East Asia is now limited to Hong Kong (by virtue of the peg), Vietnam and Mongolia.”

And they provide this chilling assessment: “The dollar and the euro still play a greater role beyond their natural spheres of influence than does the RMB but that is changing in favour of the RMB.”

Why chilling? The India-Iran rupee trade, Russia-Iran rouble trade and the worldwide acceptance of the RMB will slowly erode the prestige of the US dollar, which will have dire consequences for American prosperity. As a nation that has greatly benefited from – and exploited – the dollar’s reserve currency status, the end of the Dollar Raj will mean a severe decline in American incomes and the country’s ability to project power.

West still in the game

The rise – or to use Indian National Security Advisor Shiv Shankar Menon’s word “re-rise” – of the BRICS doesn’t mean the West will fade away soon. While its share of the global economic pie will decline substantially, Western prosperity will decline only in relative terms. PwC says the US is projected to retain its top spot on average income levels in 2050, while large emerging countries such as China, Brazil, Indonesia and India still sit at the bottom of the income table.

However, the GDP per capita differentials between the two groups of countries are projected to close significantly. For instance, China’s GDP per capita as a proportion of US levels is expected to increase from 18 percent in 2011 to 44 percent in 2050.

For higher valued products and services, the US and EU markets will still remain attractive locations given their more affluent consumers, although emerging market multinationals can expect to achieve an increasingly strong position in these markets over time as they move up the value chain.

Future of the BRICS

Currently, the BRICS countries together account for more than a quarter of the world’s land area, more than 40 percent of the world population and around 35 percent of global foreign exchange reserves.

The BRICS economies are collectively worth around $12 trillion, and will surpass the size of the US economy which is approximately $15 trillion, by 2015. Former Goldman Sachs economist Jim O’Neill estimates that by 2020 the combined GDP of the four original BRIC members will be around $25 trillion.

What makes the BRICS story so compelling and attractive to countries – from South America to Africa – is the very nature of this rainbow collation. Each country is completely different from the others not only in terms of race and colour but also in economic systems and religion. The group’s objectives are global rather than regional or local, and this is primarily owing to its DNA belonging to the Russia-India-China triangular organised by Moscow in the 1990s.

With the Western democracies becoming dysfunctional, the economic success of the BRICS may finally establish a multipolar world where smaller countries have the freedom and opportunity to have a shot at prosperity. It could finally make the world a fairer place.