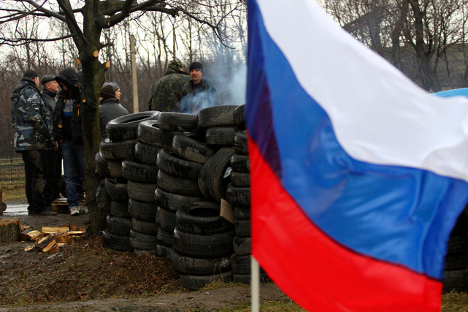 Are they "activists" or "militants"? Source: Reuters

In the on-going Russia vs. West media war, objective reporting seems to have gone out of the window and simple words define the ideological position of a media organisation or journalist.

When 10 terrorists attacked Mumbai in November, 2008, western media outlets were rather reluctant to call them what they truly were.  They Pakistani jihadis were collectively referred to as “gunmen,” even in many op-ed pieces.  The word terrorist is loaded and many organisations hesitate to use it, but then again when it comes to labels, there is a great degree of bias.

The western press corps refused to classify Kasab and company as militants, a term that has been liberally given to those in eastern Ukraine objecting to the coup-installed government in Kiev. What makes a motley bunch or poorly armed and poorly trained locals fearful of getting attacked by right-wing militia and a biased (and illegitimate) government a group of militants? Why isn’t the western media even hinting that the Right Sector, an openly neo-Nazi organisation that was responsible for last weekend’s massacre in Odessa, are militants? Make no mistake about it, the Right Sector is a well trained group that helped the US with its coup d’état in Kiev.  As long as this group is on the right side of western governments, the western media is unlikely to highlight them or condemn their actions.

The double standards of the western media publications (and their protégés) have always been appalling. The word Islamist is used rather loosely across the world and much to the delight of their masters abroad, the Anglophone class in India are happy to use the term Hindu terrorists. I wonder why the Irish Republican Army was never referred to as Catholic terrorists who held genuine grievances over a Protestant misdeed. After all, the UK divided Ireland on flimsy religious or rather sectarian grounds.

There was a time when the BBC and other western media outlets were respected as fair and objective voices in journalism. Those days are long gone. The sheer connivance with which media outlets in the West parroted the George W. Bush administration’s lies that Saddam Hussein had weapons of mass destruction has made them lose their credibility.

For weeks, western journalists have been trying to prove that the activists in eastern Ukraine comprise of Russian agents and even regulars from the army. Now even the New York Times, which has been trying to become the White House’s leading propaganda machine, published an article about how the anti-government protestors are not what they are made out to be by the US and EU.

There actually seems to be a war being fought these days, between the media publications that support Moscow and those that support the West. I won’t for a second hesitate to say that I support the Russian stance on Crimea and don’t believe that Russia is directly behind the protests in eastern Ukraine. But supporting Russia’s position doesn’t mean that I would cook up stories to further Russia’s agenda. Unfortunately the determined and well-organised reporters working for western publications are making an industry of false reporting from the restive regions.

There was so much hype when people were killed at the Maidan in February, and it is now known that the elected Ukrainian president wasn’t behind it. Where is the condemnation of the attack in Odessa when rampaging thugs even murdered a pregnant woman?

The problem with the media today is that a large section of publications and editors have decided to become mercenaries. The selective usage of words goes perfectly in line with dishing out propaganda. I’d look silly if I denied that certain Russian media outlets were engaging in propaganda as well. But then again, Russia has never acted as some sort of torch-bearer of ethics and morality around the world.

There needs to be some common ground where both camps in the media war go back to the fundamentals: unbiased and objective reporting. The big question is how words can be used to express neutrality in basic reports. Somewhere a line has to be drawn by both camps. Would it be wrong on the part of the Western media to call those occupying buildings activists instead of militants? Maybe even use the word separatists? Can the private Russian media try and at least appreciate reasonable views even if they come from those who are pro-West? Where can the international press, which is supposed to be neutral in principle, draw a line?

All this talk of a Third World War is speculative scare-mongering. There won’t be a major way involving the powerful countries because the global elite would end up losing their ill-gotten wealth and privileges. What is the likelihood that the richest of the rich will risk losing it all over a country like Ukraine that means precious little to them in the first place?