When a clown cries 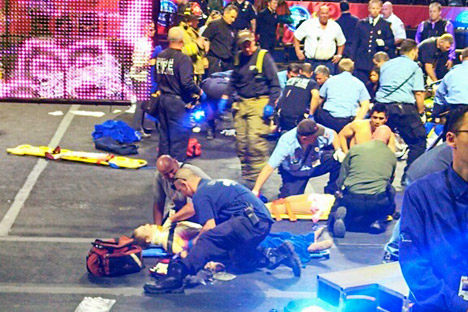 Tragedies in the red ring.

Accidents in the circus are no joke. And they are also not rare. In an art form that relies on complicated and often dangerous tricks, even professionals of all kinds cannot just find themselves with pulled tendons and painful backs, sometimes, they even die or permanently damage their bodies. This is true particularly for the aerial acts – trapeze, high wire, strap acts, aerial ring acts, and many others.

Circus goers watched last Friday as nine women plunged 35 feet while performing an act called the, “human chandelier.” Their nickname was the, “hairialists.” All nine acrobats and two other people were injured in the accident. Two performers have spinal injuries, and doctors aren't sure they will ever walk again.

The act, which entailed the women hanging high in the air by their hair, was a part of Ringling Bros. and Barnum & Bailey Circus that was performing in Providence, Rhode Island when the tragic accident occurred.

While the audience watched, paramedics rushed to the scene to carry out the women on stretchers and transport them to the hospital. While none died, their condition was listed as serious, and once again, the topic of circus accidents made headline news.

In this case, apparently one single cable snapped. In other cases, it’s human error that causes the tragedy.

I’ve seen my share of accidents in the circus, and my share of fears that performers will fall as they perform on stage. Circus artists will tell you that danger goes with the territory. The point of circus, they say, is to mesmerize audience with an element of danger – as well as artistry, grace, athleticism, theater and sometimes humor.

These dangerous tricks can take years to master, and sometimes a lifetime if you factor in the fact that many top professionals in the Russian circus start when they are young.  I admit, they are right. There is something about the adrenaline-laced performance that keeps audiences intrigued.

The first time I saw the Moscow Circus in little old Reno, Nevada, where I lived in 1990, it was in fact, the element of danger of the high wire that kept me captivated – along with the performers' ability to make it all look incredibly easy.

While the women did, in fact, wear, ‘safety wires,” hooked to belts on their back that hooked them up to a cable in the ceiling in case they fell, the men who carried the women on their shoulders (and head) as they quietly and poetically made their way across the thin wire high up in the air, wore nothing. They carried a pole for balance, and that was it.

I witnessed one time a male performer fall from the wire during practice, straight to the ground. He had a safety wire on, as he was practicing a new trick, but no one was holding on to the other end of the cable attached to his back.  He landed on his feet, fortunately not on his back or head, but the pain he felt reverberated with a loud screams as he crashed to the ground.

That wasn’t all. I saw another accident one time during a performance when a trapeze artist came barreling down from high above. He was attached by the waist to a bungee cord, that somehow became disconnected.

Down he went, crashing to the wooden floor below as the audience watched, horrified. Miraculously he had no brain or spinal injuries, but his circus career was over, and he spent months in a hospital. I think it was actually more like a year.

Canada’s Cirque du Soleil’s Las Vegas show, “KA,” was the center of media attention June of 2013, when a performer crashed 50 feet to her death through a hole in the stage during a performance.  While she died, the audience heard her groans and screams.

It was awful scene, but fatal accidents do happen in the circus world, despite what circus companies like the public to believe. In many cases, there are endless wires, pulleys, and bungee cords, even safety wires that go awry.

It’s sad. No matter how many years a circus performer trains, it’s hard to get away from accidents. And that’s just life in the circus.

Accidents and incidents circus Blogs Clowns in the Desert