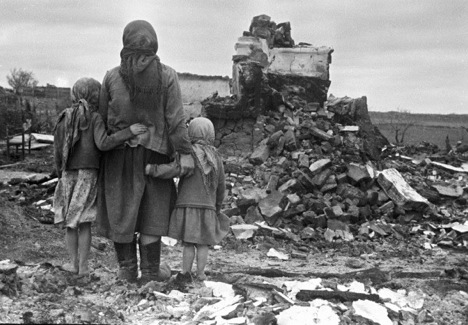 It is widely known that during World War II Russia suffered casualties and economic damage on a colossal scale, but India which lay thousands of miles away from the epicentre of the war suffered millions of deaths too.

Russia suffered the maximum casualties during World War II mainly because all the titanic clashes took place on its territory. Estimates vary widely but the most definitive is a figure of 26.7 million arrived at by a committee constituted by former President Mikhail Gorbachev in March 1989. Such a colossal number is unprecedented in modern military history.

The thing to keep in mind is that in many cases the enormous sacrifice in lives and material was partially self-inflicted due to Joseph Stalin’s interference. The majority of the nearly 19 million non-military casualties happened during the beginning of the war when Soviet defences were in disarray and during the retreat of the German Army when the Germans killed as many civilians as they could.

In the 1920s Adolf Hitler developed the belief that Germany required Lebensraum – literally living space – if the country was to compete with the nations of Europe. Because Asia, Africa and the Americas were already colonised, the only place this Lebensraum could be found was Russia.

During World War II the Nazis started killing and deporting Russians and other Slavs, whom they considered inferior. The Nazi leadership had decided the entire population of Russia was to be annihilated by starvation and replaced by Germans. The agricultural produce of the occupied Slavic lands would then be available for use by the German military and Germany proper. In the entire history of mankind such total annihilation was never attempted.

Before the war many Russians had admired Germans as a cultured people, but the war soon changed that perception. German historian Jochen Hellbeck writes in The Stalingrad Protocols that “attacks on civilians and thefts were such an integral part of the daily life of German soldiers” that German prisoners of war told their Russian interrogators about this “without any compunction at all.”

Bombing of towns and cities was part of the terrorising attack, as well as killing old ladies and other roadside refugees with machine-guns fired from aeroplanes (‘strafing’ as it is joyfully called), writes Gil Elliot in ‘Twentieth Century Book of the Dead.’

“The scale of disruption in Soviet towns and cities is indicated by the fact that many of them, at liberation, contained between one-half and one-third of their pre-war populations….About three million of these people, containing a preponderance of old people, women and children, died from want and neglect.” 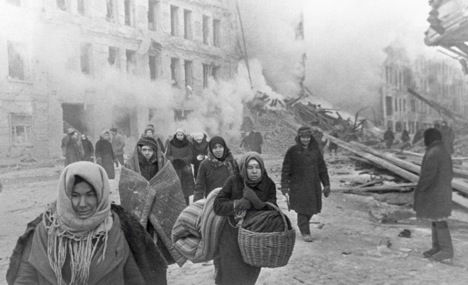 “There was also a good deal of killing for killing’s sake. In South Russia some thousands of old people were killed on the pretext of ‘euthanasia’.”

“In the course of the war eight million Russian houses were destroyed, and a high proportion of these were during the withdrawal from Russia. Crops and livestock were burned on a vast scale. Special systems and machines were used to destroy crops in seed, and growing crops were burned.”

The book ‘Soldaten’ by German historian Sonke Neitzel reveals how deeply Nazism had warped German minds. Despite the scale and magnitude of their atrocities, German POWs believed they hadn’t been vicious enough. Seeing German defeat approaching, many POWs (secretly tapped by their British captors) lamented that Germany would have won if only they had been ten times as ruthless as they were. “We were too soft,” was a common refrain.

Germany’s scorched earth policy proved counterproductive because the Soviet citizens became even more determined to defeat the enemy. “One sees the young girls, the children, who hang from the trees in the park,” wrote legendary sniper Vasily Zaytsev. “This has a tremendous impact."

Another sniper, Anatoly Chechov, recalled how he shot his first German: “I felt terrible. I had killed a human being. But then I thought of our people – and I started to mercilessly fire on them.”

Nikolay Aksyonov, a captain, said one could feel "how every soldier and every commander was itching to kill as many Germans as possible".

Churchill’s policies caused the deaths of between 3.5 million and four million Indians in 1943 by diverting food from India to Europe. It is known as the Great Bengal Famine, and impacted the areas comprising present day Bengal, Odisha, Bihar and Bangladesh. Australian biochemist Dr Gideon Polya has called it a man-made “holocaust”.

Author Madhusree Mukherjee tracked down some of the survivors of the famine and paints a chilling picture of the effects of hunger and deprivation. In ‘Churchill's Secret War’ she writes: “Parents dumped their starving children into rivers and wells. Many took their lives by throwing themselves in front of trains. Starving people begged for the starchy water in which rice had been boiled. Children ate leaves and vines, yam stems and grass. People were too weak even to cremate their loved ones.”

“No one had the strength to perform rites,” a survivor tells Mukherjee. “Dogs and jackals feasted on piles of dead bodies in Bengal's villages. The ones who got away were men who migrated to Calcutta for jobs and women who turned to prostitution to feed their families. “Mothers had turned into murderers, village belles into whores, fathers into traffickers of daughters,” writes Mukherjee.

By 1943 hordes of starving people were flooding into Calcutta, most dying on the streets. The sight of well-fed white British soldiers amidst this cataclysmic scene was “the final judgement on British rule in India” said Jawaharlal Nehru.

Churchill worsened the crisis by ordering the diversion of food away from Indians and toward British troops and Greek civilians. As far as the British Prime Minister was concerned “the starvation of anyhow underfed Bengalis is less serious than sturdy Greeks”, a sentiment with which Secretary of State for India and Burma, Leopold Amery, concurred.

Amery was an arch-colonialist and yet he denounced Churchill’s “Hitler-like attitude”. Urgently beseeched by Amery and then Viceroy Archibald Wavell to release food stocks for India, Churchill responded with a telegram asking why Gandhi hadn’t died yet.

Wavell informed London that the famine “was one of the greatest disasters that has befallen any people under British rule”. He said when Holland needs food, “ships will of course be available, quite a different answer to the one we get whenever we ask for ships to bring food to India”.

Churchill’s hostility toward Indians has long been documented. At a War Cabinet meeting he blamed the Indians themselves for the famine, saying that they “breed like rabbits”. His attitude toward Indians may be summed up in his words to Amery: “I hate Indians. They are a beastly people with a beastly religion.” On another occasion, he insisted they were “the beastliest people in the world next to the Germans.”

“Churchill’s attitude toward India was quite extreme, and he hated Indians, mainly because he knew India couldn’t be held for very long,” according to Mukherjee. “One can’t escape the really powerful, racist things that he was saying.”

Mukherjee writes in the Huffington Post: “Churchill regarded wheat as too precious a food to expend on non-whites, let alone on recalcitrant subjects who were demanding independence from the British Empire. He preferred to stockpile the grain to feed Europeans after the war was over.”

To be sure, Churchill's policy towards famine-stricken Bengal wasn't any different from earlier British conduct in India. Journalist Rajeev Srinivasan writes in Rediff  that during the Madras famine of 1877 the rations approved by the British for those undergoing hard labour was less than the starvation diet given to Jewish prisoners at Buchenwald?

Like Russia, which bore the brunt of the fighting in World War II, India’s contribution proved crucial. By 1943 more than 2.5 million well-trained Indian soldiers were fighting alongside the Allies in Europe, Africa and Southeast Asia. Vast quantities of armaments, ammunition and raw materials sourced from across the country were shipped to Europe at no cost to Britain.

Cambridge University historians Tim Harper and Christopher Bayly describe in two volumes ‘Forgotten Armies’ and ‘Forgotten Wars’ that “it was Indian soldiers, civilian labourers and businessmen who made possible the victory of 1945. Their price was the rapid independence of India.”