The men who starved to death to save the world's seeds 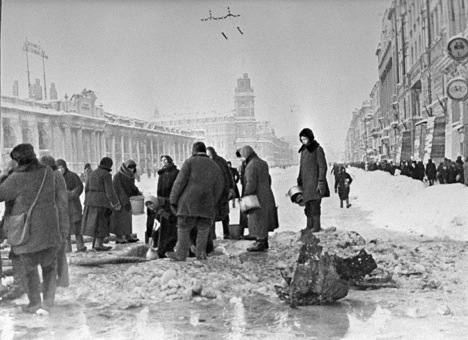 During the siege of Leningrad, a group of Russian botanists holed up in a secret vault starved to death rather than consume the greatest collection of seeds they were guarding for a post-apocalyptic world. Worse, Nikolay Vavilov, the man who had collected the seeds, also died of hunger in Stalin’s gulag.

In September 1941, when German forces began their siege of Leningrad, choking food supply to the city’s two million residents, one group of people preferred to starve to death despite having plenty of ‘food.’

As the invading Germans poured into the city (now St Petersburg), scientists and workers at the Institute of Plant Industry barricaded themselves inside their vaults. They weren’t trying to save their lives but rather the future of humanity. For, they had the unenviable task of protecting the greatest seed collection in the world from both hungry Soviet citizens and the rampaging German Army.

As the siege dragged out for 900 days, one by one these heroic men started dying of hunger. And yet not one of them touched the treasure trove of seeds they were guarding – literally with their lives.

That’s not where the cruel irony ends. The man who had been responsible for this great collection of seeds, Nikolay Vavilov, Russian geneticist and plant geographer, lay dying of starvation in a Soviet prison in Saratov.

Vavilov had travelled five continents to study the global food ecosystem. Calling it a “mission for all humanity’’, he conducted experiments in genetic breeding to increase farm productivity. Even as Russia was undergoing revolutions, anarchy and famines, he went about storing seeds at the Institute of Plant Industry.

Vavilov dreamed of a utopian future in which new agricultural practices and science could one day create super plants that would grow in any environment, thus ending world hunger.

“He was one of the first scientists to really listen to farmers – traditional farmers, peasant farmers around the world – and why they felt seed diversity was important in their fields,” says Gary Paul Nabhan, an ethnobiologist.

Nabhan who has chronicled Vavilov's life in ‘Where Our Food Comes From: Retracing Nikolay Vavilov's Quest to End Famine’, continues: “All of our notions about biological diversity and needing diversity of foods on our plates to keep us healthy sprung from his work 80 years ago. If justice be done, he would be as famous as Darwin or Luther Burbank.”

There wasn’t much justice going around in Joseph Stalin’s time. Vavilov wanted to increase farm productivity to eliminate recurring Russian famines. Early on, he defended the Mendelian theory that genes are passed on unchanged from one generation to the next. He became the main opponent of Stalin’s favoured scientist, the Ukrainian Trofim Lysenko.

From today’s St. Petersburg to the horrors of Leningrad under siege

Lysenko rejected Mendelian genetics and developed a pseudo-scientific movement called Lysenkoism. His quack theories about improved crop yields earned Stalin’s support, following the famine and loss of productivity resulting from forced collectivization in several regions of the Soviet Union in the early 1930s. In fact, Lysenko’s influence on Stalin ensured that scientific dissent from his theories of environmentally acquired inheritance was formally outlawed in 1948.

Stalin's collectivisation of private farms had led to reduced yields across the Soviet Union. The dictator now needed a scapegoat for his failure and the famine. He chose Vavilov. In Stalin’s warped view, Vavilov’s was responsible for the famines because his process of carefully selecting the best specimens of plants would take numerous years to bear fruit.

Vavilov was collecting seeds on Russia’s borders when he was picked up by secret service agents. Amidst the chaos of World War II, no one, including his son and his wife, knew where he was.

Author Geoff Hall writes in ‘Reading Nikolay Vavilov’: Before his show trial, Stalin’s police, seeking a confession, had subjected Vavilov to 1,700 hours of brutal interrogation over 400 sessions, some lasting 13 hours, carried out by an officer known for his extreme methods. Before his arrest, during the long rise in influence of Lysenko, beginning in the 1920s, Vavilov, unlike Galileo, had refused to repudiate his beliefs, saying, “We shall go into the pyre, we shall burn, but we shall not retreat from our convictions”.

“After over a year-and-a-half of eating frozen cabbage and mouldy flour, he died of starvation,” says Nabhan. “The man who taught us the most about where our food comes from and who tried for over 50 years to end famine in the world died of starvation in the Soviet gulag.”

The year was 1943 and the Germans were still in Leningrad. A dozen of Vavilov’s scientists holed up in their secret Leningrad vault starved to death while guarding their hoard of 370,000 seeds. “One of them said it was hard to wake up, it was hard to get on your feet and put on your clothes in the morning, but no, it was not hard to protect the seeds once you had your wits about you,” writes Nabhan. “Saving those seeds for future generations and helping the world recover after war was more important than a single person's comfort.”

Although Lysenko’s 25-year domination of Soviet biology ensured that a considerable part of Vavilov’s seeds became degraded and unusable, Russian writer Genady Golubev wrote in 1979 that “80 per cent of all the Soviet Union’s cultivated areas are sown with varieties” derived from Vavilov’s collection.

Vavilov led 115 expeditions to 64 countries such as Afghanistan, Iran, Taiwan, Korea, Spain, Algeria, Palestine, Eritrea, Argentina, Bolivia, Peru, Brazil, Mexico and the US, to collect seeds of crop varieties and their wild ancestors. Based on his notes, modern biologists following in Vavilov’s footsteps are able to document changes in the cultural and physical landscapes and the crop patterns in these places.

Rafael J. Routson of the Department of Geography and Regional Development, University of Arizona, Tucson, says, “Vavilov took precise notes that can still be used to assess the climate and crop correlations, pressure readings for elevation, and he described geographic patterns in crop diversity.”

According to Russian geneticist Ilya Zacharov, Vavilov was “a person of inexhaustible energy and unbelievable efficiency”. In a 2005 article in the Journal of Bioscience, Zacharov wrote: “During his relatively short life, he accomplished a surprising amount: in his expeditions he travelled all over the world, he formulated very important postulates in genetics, he wrote more than ten books, and carried out the gigantic task of organizing a system of agricultural institutions in the USSR.”

Nabhan talked to a farmer in Ethiopia who said Vavilov had “an uncanny ability...to pinpoint areas of high diversity”. An elderly agronomist in Kazakhstan, who as a boy had guided Vavilov into forests of wild apples, remembered that “he figured out everything...from little more than a day in the field”. Indeed Vavilov moved at breakneck speed, often commenting, “time is short, and there is so much to do. One must hurry”.

Little did Vavilov know he was hurrying to an unmarked grave in one of Stalin’s gulags.

Had the great scientist lived, the Soviet Union would never have experienced the bad harvests that played havoc with central planning. The country’s chronic agricultural inefficiencies played a more important role than the Afghan War in ultimately bringing down the entire system.