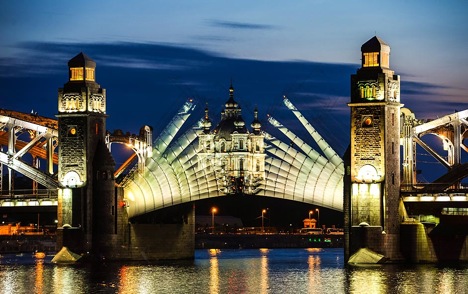 The residents of St Petersburg cherish just about every bit of warm weather and sunlight they get in a city where average temperatures are colder than Moscow and winters are long and dark. The celebrations last almost as long as the warm season.

Unlike business-minded Moscow, St Petersburg tends to be a far more easy-going and relaxed place. Here in this elegant city, it is intellectual prowess that determines a person’s standing in society. Although longer days have been a part of the landscape for over a month now, the unpredictable, cold and rainy weather dampened the spirits of the city’s residents until May 17, a fine Saturday when the weather gods were just about content with their allocated quota of the chill.

Gone were the jackets and the sweaters and out came the shorts on an evening that may still have been considered cold under tropical and Mediterranean standards. Earlier in the day, as temperatures crossed 25 degrees, the older residents of the city came to the palace square to bask in the sunlight. “We’re too old to travel to Goa or Turkey,” said a retired English teacher who claimed to be in her 80s, although she didn’t look a day over 65. “This is where we get our dose of the rare warm northern sun.” If only, we could export some extra sun from northern India to St Petersburg for free!

The glum faces from the rainy days of the week were replaced with smiles as the city’s Nevsky Prospect was filled with those enjoying the warmth. By the evening, the youth of the city waited patiently in never-ending queues. No, this was not for a football match or concert. Being the third Saturday in May, the northern capital marked Museum Night, with all of the city’s museums open into the wee hours of the morning. It would have taken at least two hours to enter the iconic Hermitage Museum on this night, but many of the lesser known galleries and museums also witnessed serpentine lines.

Many of those patiently waiting on line were sipping wine from plastic glasses and discussing the finer nuances of modern art.  This was officially the first night of the summer and the party had begun. The bars and cafes with outdoor seating were jam-packed and university students heckled with those running small shops to let them buy alcohol, albeit in most cases, unsuccessfully. It’s illegal for shops to sell alcohol after 10 pm and no one wants to get caught violating this law, especially in the city centre, where a police patrol isn’t too far.

Some of the more industrious residents of the city bought extra bottles from the café where they had their dinners. Outdoor parties were visible in just about every corner of the historic centre. It is against the law to consume alcohol in public places but the police would have had to have arrested scores of thousands of people then. A popular place for the party was the Neva riverside, where many gathered to watch the bridges open to allow vessels to navigate the river. The sparkling Russian wine called “champagneskoye” was flowing as people drank to socialise more than to get drunk.  The famous “White Nights” were still a few weeks away but the summer had descended on to the city.

Of course, not everyone on the streets was getting drunk. There were excursions of school children watching the bridges open. Families also roamed the streets together, although parents were cautious of the boisterous university students.

Warmer, longer and better days lie in wait in St Petersburg. The third week of June onwards till the end of July is a great time to be in the city with days that stretch on past midnight. The Mariinsky Theatre’s ‘Stars of the White Nights’ music festival begins on May 31 and goes on in till July 31.  The 2014 edition of the annual festival will feature two opera premieres -Hector Berlioz’ Les Troyens and Sergei Prokofiev’s War and Peace, as well as an array of classical music concerts and ballet performances.  There isn’t a better way of getting a taste of Russia’s European culture than attending some of these programmes.

St Petersburg also offers something for those with tastes in contemporary and non-classical music. As the days keep getting longer, more concerts are in store in private building yards, featuring alternative and up-coming musicians, including those from the nearby Baltic countries such as Estonia and Finland. The warmer months are also a great time to explore the older palaces and estates of the erstwhile Russian nobility. Places like the elegant summer palace of Peterhof and Catherine the Great Park in Pushkin are all within easy access of public transport and great places to spend a whole day.

Russia’s northern capital is a great place to visit in the next few months, although it is virtually impossible to get enough of it.