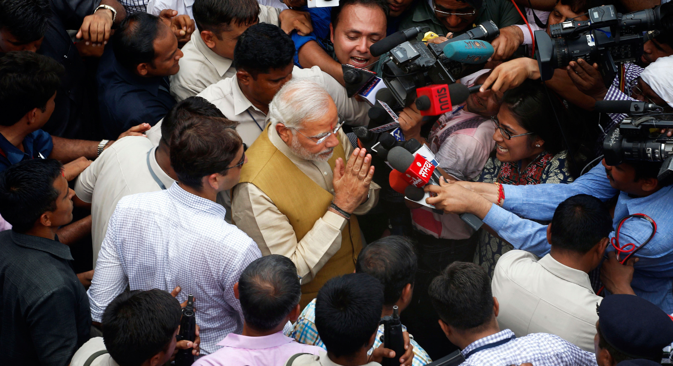 Narendra Modi greets the media at the home of his 90-year-old mother in Gandhinagar, Gujarat, on May 16, 2014. Source: AP

In the next five years, Russia could do much to contribute to the implementation of a number of India’s geopolitical aspirations, which have been declared in the past years.

The convincing victory of the Bharatiya Janata Party (BJP) and its leader Narendra Modi in the general elections in India means that voters gave credibility to the new government for at least the next five years. Now the main question is how Modi should use this loan.

Previous elections in India have proved the validity of the old thesis that predictions based on opinion polls rarely come true in India. If previously, real results, tended to be less radical than predicted (and thus contributed to the preservation of power by the ruling party), this time, the predictions were much more conservative than the final result.

A week before the final results, few predicted an absolute majority of 272 seats won by the oppositional National Democratic Alliance (NDA), and even less so by its main power – the BJP. The most optimistic predictions were giving a range of in 250 – 290 seats won by the NDA and not more than 200 by the BJP. The reality was much more radical: 336 seats were won by the NDA, of which 283 were those of BJP.  For the first time in over 20 years, one party had the opportunity to form a non-coalition government.

Credibility, however, does not mean that the new government will easily cope with the complex problems it inherited.

In the economic sector, which Narendra Modi put at the forefront of its campaign, the big question remains as to how the former Chief Minister of Gujarat can extend the positive experience of economic development of a single state across the whole country.  We’re talking about a completely different scale, and the severity of problems across the country is much greater.

The problems related to communal and inter-caste harmony in the country seem more serious. No matter how much Modi tried to refute the charges laid on him for his anti-Muslim bias, his political and his political opponents keep reminding the world at every convenient and inconvenient opportunity about his alleged involvement in the riots in Gujarat in 2002.

Moreover, the growing influence of regional parties observed in recent years is also a challenge to the centre. The AIADMK and Trinamul Congress parties which won in Tamil Nadu and West Bengal respectively, as well as their leaders Jayalalitha and Mamata Banerjee do not hide their critical attitude towards the person who in the coming days will be the new prime minister. So, we can expect a further “turf war” between the centre and the regions.

More problems and ambiguities arise in connection with the future foreign policy of Narendra Modi’s government. Indian foreign policy has always had the succession of its course, and a change of government does not mean a dramatic change of its foreign policy priorities. Apparently, you should not expect a sharp turn this time either, but the details (which may turn out to be more important) may have variations.

During the election campaign Modi himself acted as a supporter of “hardliners” and sharply criticized Manmohan Singh’s government for being too “soft” in their relations with the neighbours – primarily Pakistan, China and Bangladesh. However, even in these countries, such statements are not perceived as an indication of the future hardening of the course, and considered it as part of the pre-election rhetoric, primarily addressed to the audience in the country. Moreover, in Pakistan, the media and politicians often referred to the previous experience, when the relations between the two countries were experiencing the best period with Atal Bihari Vajpayee as Prime Minister, who also represented the BJP.

Immediately after the elections, without waiting for Narendra Modi to assume the Prime Minister of India’s chair, Pakistan Prime Minister Nawaz Sharif congratulated him on his victory and invited him to visit Pakistan.

However, the most important question in connection with India's future foreign policy line is connected with the way relations with the U.S. are built, where until recently Modi was considered a banned person because of alleged involvement in the riots of 2002. The U.S. is now trying to remedy the situation quickly: on the evening of May 16, President Barack Obama called Modi, congratulated him on his victory, and invited him to visit the United States. However, many observers believe that despite the fact that the objective interdependence of the U.S. and India dictates the need for a continued cooperation, there is no “personal chemistry” between Obama and Modi and never will be.

Against this background, many observers predict a transfer of the focus of attention of India's foreign policy to regional issues. So, rapprochement with China is possible even with all the political problems in the relationship. Particular attention will be given to the Look East policy, consisting of the development of cooperation with the countries of East Asia and the Pacific Region. Of particular importance in this context is the development of relations with Japan – both as a result the Japanese capital participating in a number of major infrastructure projects in India (including transportation and industrial corridor Delhi – Mumbai) and close personal relations between Modi and Japanese Prime Minister Shinzo Abe.

In addition, the intensification of relations between India and other major players in the Asia-Pacific region is inevitable – primarily with Vietnam, Singapore, South Korea, and Australia.

Against this background, there are excellent prospects for Russian-Indian relations to reach a new level. Ties are already superb and characterized by a “privileged strategic partnership.” The shift of attention to regional problems creates preconditions for their further development.

In the next five years, Russia could do much to contribute to the implementation of a number of India’s geopolitical aspirations, which have been declared in the past years. Thus, a reform of the UN Security Council and India's accession as a permanent member is long overdue. It is also necessary to overcome all barriers on the way to India’s transformation into a full member of the regional associations such as APEC and the SCO.

Finally, India’s regional aspirations make an excellent basis for the implementation of both long-standing, though stalled projects (such as the North –South transport corridor), and for the development of cooperation in new and promising areas. After all, India’s emergence in the Asia-Pacific region, among other things, signifies its connection to the exploration of the Arctic and the Northern Sea Route, where opportunities for cooperation are truly immense.