Satan scare: Why the US is going ballistic over a Russian missile 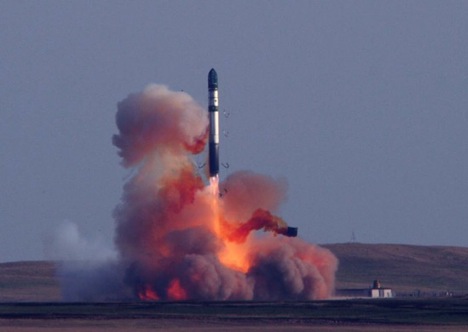 50 years after its first deployment, the SS-18 remains ready as ever. Source: mil.ru

American efforts to ground Russia’s SS-18, the world’s most potent strategic missile, are a result of having lived under the shadow of fear.

In the entire history of the human race, there has never been a weapon as destructive as the Russian SS-18 intercontinental ballistic missile (ICBM). To understand the true power of this doomsday weapon, try comparing it to the nuclear warhead the United States used to obliterate Hiroshima.

The Hiroshima bomb had an explosive yield of ‘only’ 15 kilo tonnes (KT) or 15,000 tonnes of TNT equivalent, and yet it killed 70,000 people. In comparison, a single SS-18 carries up to 10 separate nuclear warheads of around 750 KT each. Some missiles are armed with one humongous 20,000 KT warhead.

During the early years of the missile age, the United States led Russia in technology and numbers but by the early 1970s when the SS-18 started entering service in significant numbers, Moscow had closed the missile gap and started pulling ahead inexorably. In 1990 Moscow had a stockpile of around 40,000 nuclear warheads (vs 28,000 for the US) but by just using the 3,000 warheads on its SS-18s it could wipe out all human life in the continental United States in 30 minutes.

Codenamed Satan by NATO, the SS-18 weighs a gargantuan 209,000 kg. The highly accurate Russian missile can not only penetrate and destroy American missile silos, which are hardened to 300 psi, but its own silos are hardened to a stupendous 6000 psi, making the missile all but impregnable. Amazingly, for a missile of its weight and length (102 feet) it can sidewind (move in a series of S-shaped curves to evade antimissile defences) and its micro-electronics are hardened to function even under nuclear attack.

Russia to start building prototype of new heavy ICBM in 2014

The Satan’s reported ability to dig up strategic missile complexes became known as America’s “window of vulnerability”. The frightening power of this missile sent shivers down the collective spine of the American leadership, and quickly forced Washington to the negotiating table. The Strategic Arms Limitation Talks of the early 1970s resulted in a drastic slowdown of the hitherto uncontrollable arms race.

Because the SS-18 posed an existential threat to the United States, the missile became a focal issue in arms talks between the two superpowers. The Americans offered to cart away their strategic missiles based in Europe if the Russians agreed to deep cuts in their rocket forces. From 308 SS-18 launch silos in 1991, Moscow reduced the number to 154 to conform with the START I treaty.

START II was to eliminate all SS-18 missiles but it did not enter into force and the missiles remained on duty. From Russia’s point of view the delay proved to be fortuitous. As relations with the US kept nosediving over NATO’s expansion ever closer to Russia’s borders, Moscow decided to hold on to its super weapons. Now that the fake Russia-US romance of 1991 is a distant memory, it is now abundantly cIear to the Kremlin that ICBMs in hard silos are mandatory to maintaining deterrence.

Now suddenly like a blast from the past, the SS-18 is back in the news – caught up in the tit-for-tat sanctions war. In response to wide-ranging American-led sanctions, when Moscow announced it would discontinue the sale of rocket engines to the United States, if those engines could be used for military purposes, some members of the US Congress proposed a dangerous gambit.

US lawmakers want their government to begin talks with the Ukrainian government aimed at ending long-standing cooperation between Kiev and Moscow on the maintenance of the SS-18.

The Americans could be in for a rude surprise. The missile may be a product of the military industrial complex that was based in Ukraine’s Yuzhnoye Design Bureau, but the Federation of American Scientists says, “Russian enterprises provide maintenance for SS-18s which are currently in inventory”.

Even if the Ukrainians are involved in the maintenance of some Russian strategic rockets, the US may not have much leverage in the matter. Viktor Yesin, the former chief of staff for Russia’s Strategic Missile Command, told Nezavisimaya Gazeta that the Ukrainian enterprise “mainly exists due to the money Russia pays for providing warranty oversight” for the missile system. “These economic ties are valuable, regardless of who comes to power in Ukraine. And I do not foresee that this inter-governmental agreement will be revoked.”

At any rate, trying to upend Russia’s strategic missile defence is a good example of civilisational hara-kiri. The United States is playing nuclear roulette and not factoring in the Kremlin’s ability to retaliate.

Why the US need not worry

It seems the shrill campaign against the SS-18 in Washington is primarily because of atavistic fears among Americans of the ultimate doomsday weapon which frustratingly is not in their control but in their rival’s possession.

But in the 21st century when Russia is no longer a mortal enemy, such fears are baseless. A US Department of Defence (DOD) report on Russian nuclear forces, conducted in coordination with the Director of National Intelligence, says even the worst-case scenario of a Russian first strike would have “little to no effect” on the US ability to retaliate.

The report concludes Russia “would not be able to achieve a militarily significant advantage by any plausible expansion of its strategic nuclear forces, even in a cheating or breakout scenario under the new START treaty”.

US Congressmen it seems are stepping up the rhetoric because they are simply ill-informed, ignorant and churlish to boot.

Meanwhile, 50 years after its first deployment, the SS-18 remains ready as ever. While Russia’s strategic missile forces will receive more than 400 new missiles within 10 years, as part of a modernisation programme, the Satan looks set to easily survive into the 2040s after upgrades.

Strategy Page reports: “Test firings for most of the last decade have been successful, and other quality-control tests have come back positive. Despite the post-Cold War collapse of the Russian military, cash and quality personnel kept going to the missile forces, which are the final defence of the largest nation on the planet.”