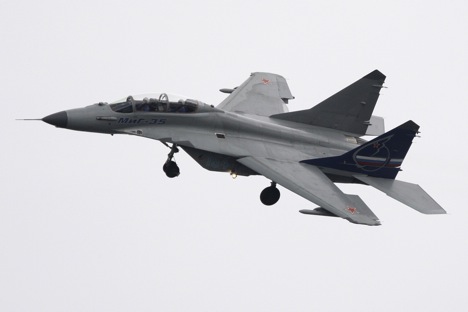 MiG-35 is a vastly improved aircraft that’s 30 per cent larger than MiG-29 and is classified as a 4++ generation jet fighter. Source: RIA Novosti / Anton Denisov

The MiG-35 multirole jet fighter, which was declined by India, is set to make a spectacular landing in Egypt as part of Moscow’s diplomatic offensive in the Middle East.

Russia’s MiG-35, which stalled in India’s multirole fighter aircraft competition in 2010, is likely to be flying in Egyptian airspace. Moscow and Cairo are reported to be circling around a deal worth $3 billion to supply, among other things, 24 advanced MiG-35 jet fighters to the strategically important country.

The MiG-35 sale which was discussed during the visit of a Russian military delegation to Egypt in April is a significant development in relations between Cairo and Moscow. Mikhail Riyabov, a military expert who was part of the Russian military advisory team during the 1973 Arab-Israeli War, told Cairo’s Al Ahram Weekly: “These deals will be put into effect in the near future. There is an agreement between Cairo and Moscow.

Because Egypt was governed by an interim government, the agreement was verbal rather than on paper. The Russians were betting on Field Marshal Abdel-Fattah Al-Sisi to win the elections and implement the agreement at the beginning of his term in office. Al-Sisi cruised to power this month.

The scope of the deal could widen to include further defence equipment such as air Mi-35 combat helicopters, anti-tank missiles and coastal defence systems.

The Egyptian Air Force, which is mostly dependent on obsolete US-made F-16 jets, is likely to be thrilled to receive the new Russian air superiority fighter. The new MiG, which was first presented at an air show in Bangalore in 2007, is intended as a multi-role aircraft with good capabilities in both air-to-air missions and precision attacks on ground targets in all types of weather. The export version will be equipped with the Zhuk-AE active electronically scanned array (AESA) radar, and is compatible with Russian and Western weapon systems.

While its detractors say the MiG-35 is just a MiG-29 in new garb, in reality the MiG-35 is a vastly improved aircraft that’s 30 per cent larger and is classified as a 4++ generation jet fighter.

Not only is it an ace dogfight duke capable of neutralising attack aircraft and cruise missiles, it can destroy sea and surface targets from standoff ranges, and also conduct air reconnaissance missions. It may also have some stealth characteristics because of the use of composites.

Plus, it is no more a stepchild of the Russian military. According to Russian Air Force commander Gen. Alexander Zelin, until the PAK-FA stealth fighter is inducted, the Russian military will use new MiG-35D multirole fighters to take on the latest American stealth aircraft, the F-35. “We have not given up on the MiG-35D light aircraft project, but we will transfer to the (PAK-FA) in the future,” Gen. Zelin said.

Russia has signed a $473 million contract for 16 MiG-35 fighters, with deliveries beginning in 2016. According to United Aircraft Corporation, the company expects around 100 MiG-35 fighters will be procured "just in the short term".

If the sale goes through, it will be an event of strategic significance because it will mark Russia’s return to the Middle East heartland – after 40 years in the diplomatic wilderness. In 1972, then Egyptian President Anwar Sadat had expelled over 17,000 Soviet military advisors from his country and entered into an unpopular alliance with the United States and Israel.

Not only will the deal be a signal that American influence in the region is weakening, but from Russia’s point of view it would be yet another achievement – after Syria and Crimea – in its strategic tussle with the West.

According to strategic analysts Yiftah Shapir, Zvi Magen and Gal Perel of Israel’s Institute for National Security Studies, “Russia has designated the Middle East as another front in its global struggle against the West, partly to balance pressures on it in Eastern Europe….Russia thus has a definite interest in the arms deal with Egypt, as it could significantly upgrade its international standing and serve as a worthy example for the other countries in the region for expanding cooperation.”

Israelis believe the deal is a major setback to US policy and diplomacy in the Middle East, and is a direct rebuff to Washington. A local analyst described it as a potential case of “Obama losing Egypt to Putin”.

Egypt is only a few steps away from financial delinquency. Since the Russians left in the 1970s, the country’s defence requirements have been met by the United States. However, in October 2013 the US said it would “recalibrate” defence aid to Egypt and suspend part of it because of a US law prohibiting provision of weapons to regimes that come to power through a military coup.

In this backdrop, Egypt's ability to self-finance these big-ticket purchases is doubtful. While Saudi Arabia and the UAE are reportedly willing to pay for the MiGs, the big question is, will they?

Both the gulf dictatorships are firmly in the American camp but lately have been trying to mend fences with Moscow. The Saudis, who were openly backing Islamic fundamentalists in Syria in a bid to overthrow President Bashar Al-Assad, were frustrated when the United States did an about turn and decided not to attack Syria.

Saudi Arabia is also concerned about American overtures to arch enemy Iran. Strengthening Egypt, which is the only Arab country (now that Iraq is neutralised) that can stand as a bulwark against the feared Persians, is therefore in Riyadh’s interests.

However, if petrodollar finance doesn’t come through, it doesn’t mean Moscow will back out of this strategic low-hanging opportunity. Russian arms export cartel Rosoboronexport has been notching up sales worldwide, riding on easy finance provided by the Russian government. Sergei Tshimisov, a Russian arms official, told the Kuwaiti newspaper Al-Rei that Moscow is prepared to be “very flexible” on payments as it is interested in solidifying its relationship with Cairo.

When the MiG-35 was offered to India, the primary problem with the aircraft was lack of state support for the programme. This had acted as a barrier in securing foreign orders.

Maintenance was the second issue. Time between engine overhauls should be at least 2000 hours and overall life 4000 hours, but the RD-33 didn't meet these parameters, a source told Kommersant.

Both these issues are now sorted and the plane is ready for takeoff. Serbia is another nation that has signed up for the aircraft.

The question is, will India regret not purchasing the MiG-35, which costs just $30-40 million per unit as opposed to the chosen Rafale with a sticker price of more than $100 million – and climbing.