5 Indian practices that could be implemented in Russia 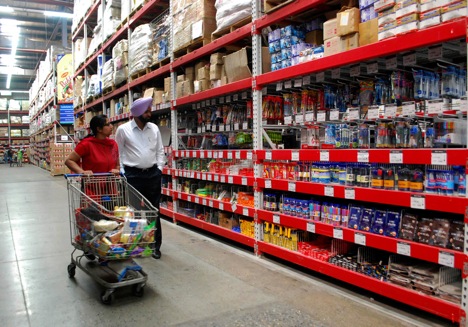 Russia could use its own version of maximum retail price. Source: AP

Certain common practices in India could bring a qualitative improvement in the lives of many common Russians.

Since attaining independence in 1947, India has marched ahead in many respects and has a lot to be proud of. India has learned a lot from Russia over the years and is continuing to learn and much of the technical prowess in the country can be attributed to decades of cooperation with Russia, especially in the space industry. Russia can also learn a lot from India and there are certain Indian practices that the country can emulate.

It is widely accepted that most Indians are natural linguists. A student graduating from higher secondary school is usually fluent in three languages: English, Hindi (in many parts of the country) and the regional language. In India, a lot of stress is laid on pupils learning a second and third language and actually being able to use it. The Russian aversion to foreign languages (and English in particular) dates back to the Soviet days. But even now, English is not widely spoken in most parts of the country, among the youth and this makes them lose the competitive edge in a rapidly globalising world.

Russian is a very rich and still developing language and is compatible with the latest software and technology, but it is important that the average Russian school graduate reaches the level of fluency in English that his or her peer does in places like Finland and Germany. One of India’s biggest advantages in the information technology industry is its English-language proficiency. This is something that Russia can emulate in a matter of a couple of decades if there is a focussed approach.

5 new areas to focus on to strengthen India-Russia ties

This is one Indian system that shocks most of my Russian visitors in India. In Russia, prices for bottled water, snacks and any packaged item for that matter vary from shop to shop. A litre of bottled water in a supermarket would be cheaper than 600 ml bought from a kiosk in a metro station. Maximum retail price or MRP is an excellent concept that ensures that buyers don’t get ripped off.

People go to consumer court to prove a point in India if a shop-keeper charges even 2 rupees extra for a soft drink. The courts are also very sympathetic to the common man and charge hefty fines on those who “exploit” the consumer. Russia could definitely do something better when it comes to consumer safeguards and unfair profiteering.

This is something that many Russians are averse to given the days of Soviet scarcity and when everything broken had to be fixed in some way or another. The availability of cheap consumer and electronic goods and the aspiration to have the most fashionable European accessories has brought in a new culture of consumerism. Most old items in Russia go straight to the bin and landfills.

Although India has a long way to go when it comes to waste management, the “informal” industry in the cities makes sure that just about everything is recycled. Parts are removed from old mobile phones and sold by the “bangar-wallahs” and bottles, newspapers and plastics also make their way back to users in a different form. Recycling could become some sort of a major industry in smaller towns and regions closer to Moscow and St Petersburg.

Although the early twenty-somethings in India are beginning to emulate the brat-pack overseas, there is still a strong savings culture in the country. Compare this to Russia, where rapid inflation and a culture of splurging makes a lot of people live from salary to salary.

When the collapse of the USSR led to a lot of people losing all their life-savings in a matter of days, keeping money aside for a rainy day became a frowned-upon concept. Now that there is stability in Russia and a solid banking system, it would help if more young people saved money and also started looking at investment planning, something that is very popular among the urban Indian youth.

Spicing up the cuisine

I love Russian food and even the blandest of Russian dishes appeals to my taste buds. As a connoisseur of global cuisine, I think some Russian dishes could use a hint of Indian spices. A mild sprinkling of chillies would not hurt some Russian soups. In fact, it is proven that chillies actually warm up the body in cold weather.

Russian cuisine has adapted itself over the years and there are many hints of Italy and other parts of Europe at the Russian dinner table. A hint of Indian flavourings and seasonings would liven up a Russian meal. Of course, the conservative guardians of Russian culinary traditions may find this blasphemous but given the growing open-mindedness of the younger generation, this is something that would be welcomed.