Alexander Pokryshkin: The air ace who terrorised the Luftwaffe 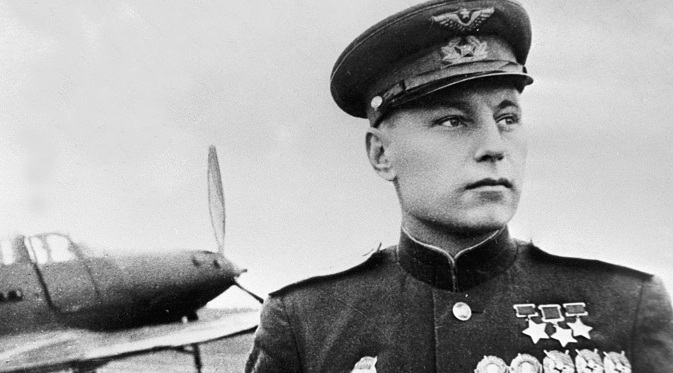 For Pokryshkin, the struggle for air superiority over the Luftwaffe was almost an obsession. Source: RIA Novosti

Air combat tactics developed by Russian fighter pilot Alexander Pokryshkin proved to be the decisive factor in the powerful Luftwaffe’s defeat, which ultimately ground down the German blitzkrieg.

The Red Army’s victory against the Wehrmacht was made possible after the Russian air force defeated the almighty Luftwaffe in a titanic clash that dwarfed the Battle of Britain. The credit for Russia’s success in the skies goes to Alexander Pokryshkin who single handedly changed the obsolete Soviet tactics that were in place when the Germans launched their blitzkrieg in 1941.

There are bold pilots and there are old pilots, but there are no old bold pilots. That popular saying was more or less true because fighter pilots had a high attrition rate during World War II. But Pokryshkin bucked that trend. He was not only a great tactician but also a fearless pilot who led from the front and remained a fighter till the last days of the war.

During the war the Russian fighter pilot made 650 sorties, participated in 139 air battles and was the second leading air ace in the Soviet and Allied forces, with an official record of 59 downed enemy planes. He retired as marshal of Soviet aviation.

World War 2 on the Russian screen

However, Pokryshkin’s spectacular career almost never got airborne in Joseph Stalin’s dystopian dictatorship. His criticism of the ineffectual official air warfare doctrine – that led to huge losses in the Voyenno-Vozdushnye Sily (VVS, literally Military Air Forces) against the Luftwaffe in 1941 – made him a target of the establishment. He was grounded when his superiors discovered he was teaching his fellow pilots new tactics he had developed. A long spell in the gulag seemed inevitable.

However, the early setbacks against the Germans – largely because of the result of Stalin's policies – had given the Soviet high command some independence. When the brass in Moscow checked out his tactics, Pokryshkin was promoted to squadron commander in the 55th Fighter Air Regiment of the 4th Air Army. It turned out to be one of the decisive decisions of the war.

By 1943 the Russian aerospace industry was delivering increasingly better aircraft such as the Yak-7B, La-5, Yak-9 and the legendary Il-2 Shturmovik which outgunned, outran and out-maneuvered the German planes. The problem was the outdated Soviet tactics. That changed with Pokryshkin’s arrival.

The air ace perfected his tactics during the heavy fighting over Kuban near Crimea in early 1943. The area saw some of the most intense air combat of World War II, with daily engagements of up to 200 aircraft in the air. In comparison the Battle of Britain was a mere sideshow, popularised by British propaganda which inflated German losses way beyond reality.

The VVS became a transformed machine. In Russian Aviation and Air Power in the Twentieth Century John Greenwood, Von Hardesty, Robin Higham say: "Pokryshkin's innovations played an important role in breaking the hold of outdated horizontal maneuvering and introducing vertical tactics that best took advantage of the qualities of the new Soviet aircraft.”

Along with this, Russian commanders changed the attack priorities of their pilots. Instead of engaging German escort fighters first, they were directed to attack the slower bombers. This had a dramatic impact on the battle. Because the bombers were slower they were easier to attack and the Russian fighters went in for the kill. The sight of their prized bombers going down in flames over enemy territory tended to demoralise the German escort fighters. The Germans were then more likely to make rash moves, which would quickly end in a German rout.

The low and middle groups engaged enemy bombers and provided air cover for the ground forces while the high group took on the enemy fighters and provided high cover to the other two groups. “The low and middle groups could this fully focus on attacking the enemy because the high group covered them from surprise attacks from above,” says Russian Aviation and Air Power in the Twentieth Century.

Sergei Dolgushin, another Russian air force ace of World War II with 24 victories, defined what it takes to be a successful fighter pilot: “A love of hunting, a great desire to be the top dog.” In the death-defying battles over Kuban, Pokryshkin learned that sudden, swift attacks were the key to success and survival in the air.

Upon sighting German fighters, Pokryshkin was always the first to tear into them, creating a mess of their formations. His simple and direct tactical formula of “altitude-speed-maneuver-fire!” soon spread through the VVS and became the Soviet fighter pilots' formula for aerial victory.

It is a measure of how much the Germans feared him that they would refuse to engage with the Russian fighters if they knew Pokryshkin was around. In fact, when his unit moved into Ukraine he preferred to use the radio call signal Sotka (hundred), because he knew the Luftwaffe had ordered its pilots to stay on the ground if they knew he was in the air.

In conjunction with Pokryshkin’s tactics, another factor played a definitive role in the German defeat. This was the marked improvement in Russian theatre air defences.

The qualitative and quantitative improvement in air defence guns made it difficult for the German fighter and bomber units to enter the skies over the battlefield. The German ground forces had relied on the screaming sirens of the Stuka dive bombers, among other bombers, to create panic among enemy ranks. They had done it in Poland, the Netherlands and against the British Army in France. But against the Russians the Blitzkrieg had lost its most vital element – air support.

The struggle for Crimea during WW II

For Pokryshkin, the struggle for air superiority over the Luftwaffe was almost an obsession. And it paid dividends. So effective was the new VVS that air-to-air combat was the primary means for achieving air superiority and accounted for an astounding 77 per cent of all German aircraft destroyed during WW II. Pilots of Pokryshkin’s air division brought down as many as 1,147 enemy aircraft.

In 2003 at a festival devoted to the air ace in Moscow, Marshal of the Air Force Ivan Pstygo paid him this compliment: “Assault planes made their appearance only thanks to Pokryshkin.”

Even after the war Pokryshkin continued to suffer at the hands of the communist totalitarian regime. He was repeatedly passed up for promotion. Only after Stalin’s death was he finally promoted – to air marshal. Later he refused to support a glorified account of Russian Premier Leonid Brezhnev’s role in the Battle of Kuban, where Brezhnev had played a marginal role at best. Like a true hero he preferred truth to dishonour.