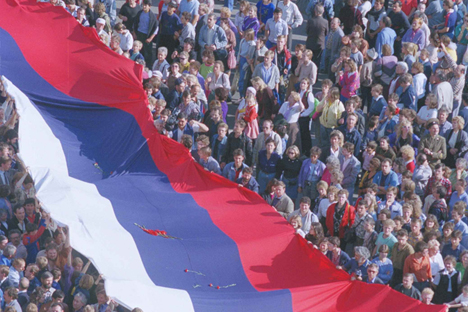 On June 12, 1990, the Russian Soviet Federative Socialist Republic (RSFSR) - the core of the USSR adopted the Declaration of State Sovereignty, when most of the Soviet republics including Ukraine had also done this. Source: AP

What has changed in a year, where the Russian society was galvanized and the popularity rating of President Vladimir Putin has touched a whopping 80 percent mark?

Last year I had written that Russia's National Day, celebrated on June 12, is “not a very red-letter day” for the general public. Surprisingly, this year there is an absolutely different mood, which reflects the national confidence and unity, a sense of pride among the common people I encountered on the streets of Moscow.

So what has changed in a year, where the Russian society was galvanized and the  popularity rating of President Vladimir Putin has touched a whopping 80 percent mark, unmatched by any of the Western leaders in their countries?

The grand success of the Sochi Winter Olympics and Paralympic Games - a brain child of President Putin, reignited the confidence of millions of Russians in their state which still could 'deliver' grand plans after two decades of decay and chaotic developments in post-Soviet period.

The massive anti-Putin propaganda in the West calling for boycott of the games over alleged prosecution of gay and lesbian communities in his country, backfired and even hisbête noire, disgraced oligarch Mikhail Khodorkovsky, shortly after release from the prison had spoken in favour of Sochi Winter Olympics.

However, back-to-back developments in Ukraine and eventual return of Crimea into Russia's fold was the game-changer. Without firing a single shot Putin's Russia returned the 'wedding gift' given to Ukraine by Soviet leader Nikita Khrushchev in 1954 on the 300th anniversary of joining the Russian Empire.

This also exploded the myth about the miserable state of the Russian armed forces. In an article published recently by The Financial Times, western experts conceded that in Ukraine, Russia outsmarted NATO by fighting a 21st century war, while the US-led Western military alliance still has the mindset of the Iron Curtain era.

The brazen US meddling in the Ukrainian affairs resulting in the ouster of democratically elected (according to the Western norms) President Viktor Yanukovich and installation of a puppet, Russo-phobic neo-Fascist regime in Kiev - the cradle of Russian civilization, also opened eyes of home grown Europhiles, who could clearly see how Washington was twisting hands of its European allies, reminding the era of Soviet doctrine of “limited sovereignty” for Warsaw Pact allies.

On June 12, 1990, the Russian Soviet Federative Socialist Republic (RSFSR) - the core of the USSR adopted the Declaration of State Sovereignty, when most of the Soviet republics including Ukraine had also done this.

Ukraine's many problems stem from its nationalist elite's notion that without Russia their country will become a flourishing European nation like France or Germany. Like most of the former Soviet republics, Ukraine also believed that it was 'feeding' Russia, without realising that the cheap Russian energy resources including natural gas and other mineral wealth were the foundation of their economies, which simply could not compete in the global market.

Thanks to changes and prosperity in Russia under 14 years of Putin-era demonised by the West, the Russians no longer crave for Georgian and Moldavian wines, when shops across the country are well stocked with French, Italian, Spanish wines. Instead of going to Georgian or until recently Ukrainian resorts in Crimea, they prefer to travel to Thailand and Goa in Asia and top resorts in France, Italy, Greece, Spain and even distant holiday destinations in the western hemisphere.

Russians today export grain instead of importing it from the US in the Soviet past, eat best fruit grown in the global orchards instead of poor quality products from the former Soviet republics.

Millions of immigrants from former Soviet republics including Ukraine are working in Russia to sustain their families at home through remittances. Today's reality leaves no scope for debate on 'who is feeding Russia'.

Ahead of this year's national day President Putin has added another feather in his cap by formalising the Eurasian Economic Union with his counterparts from Belarus and Kazakhstan, more countries in the former Soviet space like Armenia, Kyrgyzstan have shown interest in joining the customs union of the three and Eurasian Economic Union to restore and develop economic and trade linkages lost due to Soviet collapse.

In conclusion I would like wish my Russian friends peace and prosperity on their national day - Den' Rossii (Russia Day).