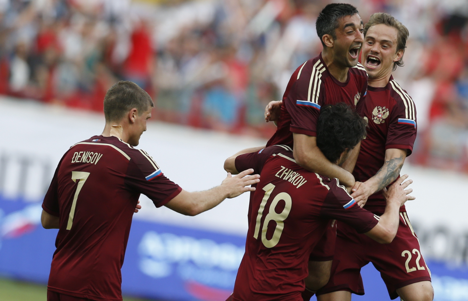 Members of Team Russia celebrating a goal against Morocco in a friendly match. Source: AP

Since India is not playing in the FIFA World Cup, one logical conclusion is to cheer for an underdog like the Russian team, but it’s more complicated than that.

Russia kicks off its football World Cup campaign this week with a match against South Korea. Fabio Capello’s side comprises mainly of inexperienced players and even the legendary coach doesn’t seem to have a lot of expectations from the Russian team.  Since Indian fans in general don’t know much about Capello’s men, not many of them will be cheering for Russia.

India’s best days in football were in the 1950s, when the team reached the semi-finals of the Melbourne Olympics and looked like it was going to upset a highly favoured Yugoslavia. Despite India’s woes in the sport, Indian fans are among the most knowledgeable in the world. Thanks to live televised coverage of professional European leagues, the sport’s popularity has grown immensely over the last decade, especially in urban India.  In fact, FIFA even awarded the country the rights to host the under-17 World Cup. At this year’s main event this year, Indian fans are divided over which team to support.

Lionel Messi is probably the most popular footballer in the country and that was evident when the Salt Lake Stadium in the ‘Mecca’ of Indian football, Kolkata was jam-packed to watch Argentina take on Venezuela in 2011. There was hardly a fan in the city, famous for its left leanings, cheering for Hugo Chavez’s country. I would love to see Messi win a World Cup and cement his name with the legends of the sport. But then again, I grew up a Brazil fan or was rather brainwashed to be one, by my football-loving father who idolised Pele. It’s not very easy for me to cheer against Brazil and all this talk of BRICS solidarity (and the fact that I am a huge Neymar fan) makes me want to cheer for the hosts. But Brazil has won enough World Cups already, and after 11 years of living in and out of Russia, I can’t but help support the Russian team.

The Russians are the classic underdogs. No one expects them to make any kind of noise, despite being in what is probably the easiest group in the whole draw. Once any team advances past the group stage and plays in a ‘win or go home’ match, the pressure can easily get to the favourites.

I have had a mixed relationship with Russian football. Some drunken fans in the Russian Far East once mistook me for a Spaniard (!!) and wanted to beat up a “machu” after Spain got the better of Russia in a group match in Euro 2008. In addition, Spartak Moscow fans can’t exactly be classified as the most endearing on earth.

Despite the odd unpleasant incident, I have grown accustomed to supporting Russia. It is, all the more, easier at the European level.  For me personally, supporting Russia is more about solidarity with my Russian friends and family. They react the same way their football team does well as my dear ones in India do when their cricket stars play well. The incident with the stupid fans who wanted to smack a “machu” did irritate me, but I still wanted to see Russia do well in Euro 2008. I was back in India when Russia played Sweden and was still at work when the match was going on. I saw the Russian team score the first goal from the cafeteria and went running in to the newsroom screaming that Russia was ahead. Most of my colleagues in the quiet newsroom seemed to have been woken up from a weekday evening slumber by my elated reaction. They switched on the game and when Russia scored a second goal, I was asked to stay calm. It was in the same tournament that the team managed by Guus Hiddink went all the way to the semi-final.

I remember watching the Russia vs. Holland quarterfinal in a Bangalore pub, full of large Dutch people. I was probably the only person in there not wearing an orange t-shirt. I quietly enjoyed watching the Russian dominance right up to the closing stages of regular play when Dutch legend Ruud van Nistelrooy’s header equalised the match. The pub came alive and all the Dutch fans were going ballistic. One smug fan understood that I was the lone Russia supporter in there.  He patted me on the back and in a condescending manner said Russia gave the Dutch a good fight but would lose in extra time. I just smiled back at him, having a gut feeling that Russia would win.

The Russian team exploded in extra time and scored 2 goals and you could have heard a pin drop in there, if it weren’t for my screaming and elation. Arshavin’s 116th minute goal was the final nail in the coffin for Holland. Since I knew that the Dutch were great sports, I could behave like that. I wouldn’t have dared to celebrate like that in front of any other fans.

Here’s hoping that the Russian team can produce that kind of magic again in the 2014 World Cup! Go Russia!