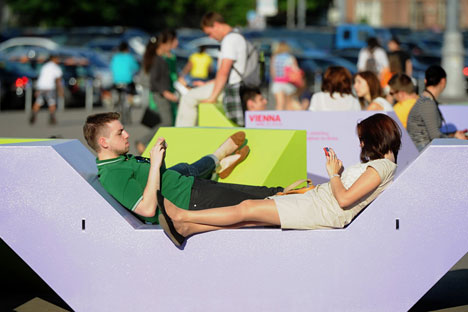 Has the middle class changed in the past years? Source: ITAR-TASS

This week, debate erupted over the likelihood that the world will run out of oil in the near future and the feasibility of Russia’s missile defense system while a story on the opinions of the Russian middle class fell flat.

RBTH fans on social media seemed to be taking a break from commenting on stories about Ukraine this week and instead found much to debate in a story we ran on Russia’s oil reserves. During this week’s World Petroleum Congress in Moscow analysts from BP presented a report showing that global reserves of oil will run out in 53 years, assuming the present rate of production.

The report was meant partially to highlight Russia’s potential as a producer of shale oil – one of only four countries in the world with significant shale oil potential. Facebook fans picked up this point, saying that the report was meant only to justify the exploration of shale reserves, which often damage the environment.

Other readers dismissed the report, pointing out that rumors of the end of fossil fuels have been around for decades.

Another of the week’s most hotly debated posts was also one of the most shared pieces in RBTH history: an infographic showing how Russia’s EuroPRO missile defense system works. On Facebook, the discussion revolved around where exactly the missile interceptors would explode. The infographic was meant to show the general trajectory of missiles and interceptors, but this could have been made clearer in the description.

The story that accompanied the infographic, while generally well written, did contain near the end several statements that were unsupported by facts or quotes in the body of the text. We could have edited this text more rigorously. The final paragraph in particular could have been deleted.

Finally, we ran a story on Russia’s middle class this week, which was much shared but not much discussed. A new definition from sociologists at the Russian Academy of Sciences classifies 42 percent of Russians as middle class based on shared characteristics such as a preference for stability and respect for authority.

According to the new criteria, 70 percent of the middle class is made up of civil servants. In 2011-2012, those participating in the mass protests against election fraud were often described as members of Russia’s growing middle class – the people who vacationed in Europe and supported Moscow’s trendy cafes.

Has the middle class changed so dramatically in the past two years, or is it just the way of defining them that is different? RBTH readers may be considering these questions, but they were uninterested in discussing them with others.