Quality comes at a price 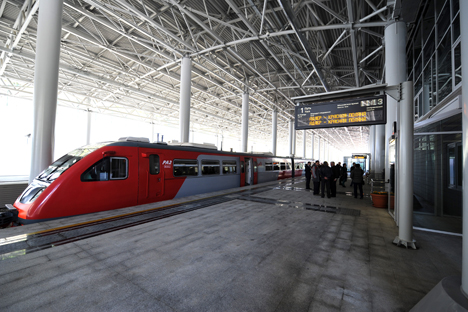 Bullet trains in India will not be cheap. Source: Itar-Tass

Raising the prices of train tickets in India was a necessary evil. Regular hikes in fares in Russia has helped improve both services and the maintenance of trains in the country.

As someone who regularly takes the local trains in Mumbai, I am not exactly thrilled about the fact that from tomorrow a monthly first class pass will cost more than double of what it did over the past year. It’s easy to whinge like a typical Bombayite about how the Indian Railways sucks the profits out of the city’s suburban trains and to subsidise other loss-making operations in other parts of the country. This is part of a greater facetious grievance that the city pays disproportionate taxes and gets little in return (case in point, both the Reliance Petrochemicals plant in Jamnagar and Tata’s largest steel plant in Jamshedpur pay their taxes from Mumbai despite being far away). When it comes to India’s humongous railway system, changes are a must.

The fact is that the Indian Railways are in really bad financial shape and need to increase fares across the board, especially for higher-end services.  India is a net importer of energy and with oil prices continuing to shoot up, low cost tickets are simply unsustainable.  Prices of railway tickets (and all other modes of public transport) in Russia have been going up with regular alacrity. There are those old-timers who talk about the days when a ride on the Moscow metro cost 5 kopecks, but even they would understand that it is impossible to pay a decent salary to the employees of the underground trains if tickets were ridiculously cheap.

As someone who first took a train ride in Russia on the BAM in 2003 and most recently travelled on the ultra-modern Sapsan fast-train from Moscow to St Petersburg, I can safely that a combination of privatisation of the railways and foreign investment has done a world of good for Russian Railways. There is likely to be an argument in India that such a privatisation would be shady (as would similar measures for Air India), but the fact remains that these two government-owned entities can simply not continue to function the way they are at the moment.

But before privatisation and foreign direct investment in the Indian Railways, price rises are a must if we are ever going to expect sustainable quality. The railway system has to be run with greater efficiency. One of the keys for India to become an economic superpower is having efficient and modern railways. This covers both passenger and freight traffic. In the case of Russian Railways, the privatisation has only been partial but structural reforms and separation of freight and passenger services into different verticals has transformed a railway system that faced similar challenges to what the Indian Railways face now. This isn’t to suggest that the Russian Railways are free of hiccups but they are in a considerably better shape.

It goes without say that the Indian Railways, one of the largest employers in the world, faces a unique set of problems. But certain practises from countries like Russia can easily be implemented, like the flexible schedule tariffs.  This involves raising the fares during busy periods and offering discounts during the lean seasons. Heavy investment in bullet trains connecting cities that are now served by the Shatabdis would also rake in a lot of profits for the Indian Railways. The Sapsan that connects Moscow and St Petersburg regularly has a profitability of over 30 percent. High-speed trains in India would also come at a cost, but then they would take off the pressure from the country’s regular trains.

The joy of travelling platskart on a Russian train

There have to be more innovative ways of getting India out of the financial and fiscal hole that the country is in thanks to a great degree of corruption and mismanagement by the previous regime. However, there is no way out of regular price increases when it comes to trains. Travelling long distance on trains must not be seen as a birthright but more on the lines of a privilege. This would reduce wasteful travel in the country and also ensure the trains are profitable and well maintained. The railway ticket price rise, whether it is for Mumbai’s local trains or long distance trains from the hinterland, should be a bitter pill that all of India swallows if we want a modern railway system. Russia has shown the way with its railway reforms.

There seems to be no hue and cry about the fact that India taxes airline passengers more than most countries. If the government was more considerate of the common man and the airline industry, it would not punish both so much. Flying is much cheaper in European countries and middle income Asian countries than it is in India. In fact, if air fares came down to the levels of those countries, more common people would be able to fly regularly.