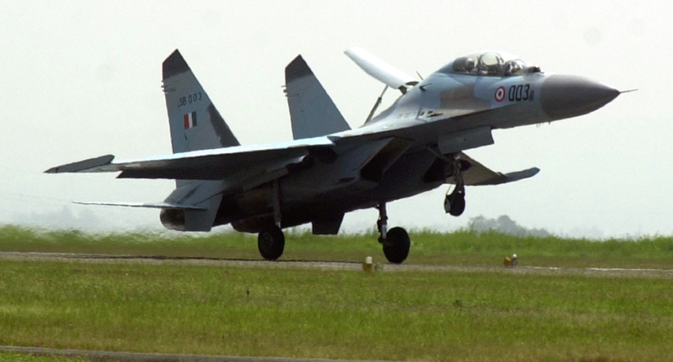 India’s Sukhoi-30 MKI fleet is currently pegged at 272 (including aircraft under order) but the number will clearly increase as HAL cranks up production. Source: APSource: AP

Faced with a serious fighter crunch, the Indian Air Force is opting for more numbers of its proven war bird, the Flanker, to maintain air dominance.

The drawn out drama over the signing of the Rafale jet fighter contract means the Indian Air Force (IAF) will rely on its heavy hitter, the Sukhoi-30MKI, to boost its dwindling fighter fleet.

The 25-ton Su-30 – NATO reporting name Flanker – is the IAF’s elite fighter-bomber. Filling its low-end fighter needs will be the locally developed Tejas II light combat aircraft, while the Rafale is meant to straddle the middle tier as an intermediate fighter.

In 2012 the 4++ generation Rafale came out on top in India’s 10-year-long competition to supply 126 jet fighters to the IAF. However, two years later India and France are still haggling over key issues such as price – which has doubled to $20 billion – and production sharing.

The IAF has told the new government that Dassault Aviation, the maker of the Rafale jet, and Hindustan Aeronautics Ltd (HAL), which will produce the aircraft in India, must put their delivery guarantees in writing before the MoD signs the contract, reports Defense News.

However, HAL is unwilling to give any written guarantees on the delivery schedule for the Indian-made Rafales, and instead wants Dassault to guarantee deliveries of the Indian-made aircraft, a condition the French have rejected.

If media reports that the contract will be finally inked in the last quarter of this year are true, then the first 18 Rafales in flyaway condition will arrive from France in 2016. The rest of the 102 – Indian made – aircraft won’t start rolling off HAL’s assembly lines until 2018.

In the backdrop of such uncertainty, the IAF has decided on the simple maneuver of buying more of the powerful – and proven – Flankers.

Additional Flankers also seem inevitable in view of the earlier than expected retirement of the venerable MiG-21 ad MiG-27 fleets. The last of the MiG-21 Type 77 – the oldest variant that was the IAF’s mainstay in the 1971 Indo-Pak War – was retired in January 2014, reports the New Indian Express. Two squadrons of Type-96 MiG-21s will revert to operational role from training and will continue to serve the force till 2015. The four squadrons of MiG-27s will be retired in a phased manner by 2016-2017.

Former air force chief N.A.K. Browne revealed how the IAF is juggling numbers and aircraft to maintain a minimum of 34 squadrons – below which India’s air defence will be dangerously compromised. “What’s going to happen is that at least in the 12th Plan which finishes in 2017 we will continue to maintain 34 squadrons….Right now we have 34 combat squadrons and in spite of these drawdowns of the MIG-21s, we are supplementing them with Su-30 squadrons.” He added the IAF will have “far greater capability than even what we have today”.

The expansion of Flanker bases is another indication that India is cranking up production of its most versatile fighter. Its huge 3000 km range, 4.5 hours combat endurance and capacity for being refuelled mid-flight make the Flanker perfect for being stationed in bases at all corners of India’s vast landmass and even beyond. That also makes it the ideal “swing” fighter capable of being fielded in a two-front war involving Pakistan and China.

More than 100 Sukhois will be spread out across the country – in strategic air bases such as Pune, Maharashtra; Bhuj, Gujarat; Jodhpur, Rajasthan; Bhatinda and Halwara in Punjab; Sirsa, Haryana; Bareilly, Uttar Pradesh; Kalaikunda and Hashimara, West Bengal; Chabua and Tezpur, Assam; Thanjavur in Tamil Nadu; and in the distant Andaman & Nicobar Islands.

The increased Chinese naval activity in the Indian Ocean has also compelled the IAF to bolster its capability down south. The Sukhois, which will arrive in Thanjavur in 2015, will be just a few minutes flying distance from the Sri Lankan port of Hambantota, in which the Chinese have shown a keen interest.

The Sukhois that can be configured to drop freefall nuclear bombs are based at Bareilly, Tezpur, Halwara, Pune and Jodhpur.

The Sukhois are also being modified for reconnaissance. A handful of Su-30MKIs are being tasked with strategic surveillance along the India-Pakistan borders. Armed with Israeli reconnaissance pods, these fighter jets have the capability to look up to 300 km into enemy territory. These aircraft are based at Bhuj and Sirsa.

Officially, India’s Sukhoi-30 MKI fleet is currently pegged at 272 (including aircraft under order) but the number will clearly increase as HAL cranks up production. It is an impressive strength for such a high-end and expensive ($67 million to $79 million) weapons platform. This shows a keen sense of judgement by the IAF, which realises that 100 percent fleet utilisation is impossible and having a large number of aircraft around is the key to getting the job done.

“These aircraft will be the high end of India’s air power, and can be expected to remain in the force past 2030, and are competitive with or superior to top-end European fighters and American F-15 variants,” says Defense Industry Daily.

Does India need the Rafale?

To be sure, the primary reason for selecting the Rafale is to reduce dependence on one vendor country. Currently, Russia supplies more than 70 per cent of India’s defence requirements. The other objective is to acquire the full technology suite of a modern aircraft for local production. French technology is being pitched as the magic potion that will save the Tejas programme, while also providing a much-needed boost to the aerospace and defence electronics industries in India.

Also, having a medium fighter can be useful as the MiG-29 Fulcrums proved to be during the 1999 Kargil War, when the top cover it provided allowed the Indian MiG-21s and Mirage-2000s to strike at Pakistani positions with impunity. The presence of the Fulcrums kept away the Pakistan Air Force F-16 Falcons, which refused to engage with the IAF fighters. The Rafale is meant to perform in a similar role.

However, forking out $20 billion to the French – at a time when ordinary Indians are being asked to brace for tough economic decisions by the government – seems overly extravagant. If technology absorption and diversification are indeed the driving motives, India should be able to do both and save money by cutting the order by, say, half.

It seems counterintuitive that Indians – who are legendary or rather notorious for their bargaining skills – are not able to drive down the Rafale’s price to Flanker levels. The Sukhoi-30MKI is an excellent bargaining chip India has, and New Delhi must learn how to play its air ace well.