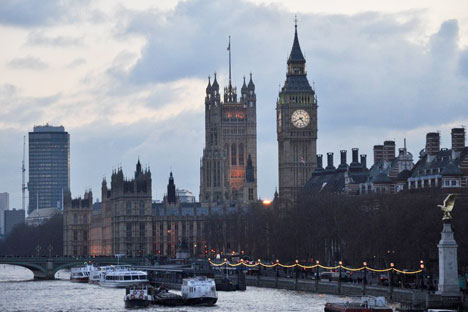 "London is the capital of Great Britain" is the first thing Russians think of when they hear about the UK because it was one of the first phrases they learned in English class. Source: Tatiana Shilovskaya

If you move to another country with different traditions you can find things that seem weird to you but, for locals, are part of ordinary life. Tatiana Shilovskaya spent eight months in Brighton studying Media and Communications. Here are her impressions about the UK and English people.

The first things you have to handle in a foreign country if you are Russian are the prejudices. For the reason there are so many of them I had to refute every one. Once, I had a conversation with a Spanish guy who asked me whether it is true that in Russia everyone has a personal polar bear, drinks vodka on Red Square, plays the balalaika and wears shapka-ushanka (a hat with ear flaps). Obviously, I had to disappoint him because I’ve never seen a bear outside a zoo, never played even a guitar (how can I play a balalaika then?) and it’s curious to find out that I tried vodka for the first (and last) time in the UK.

However the most popular prejudice is the one about the weather. I am from Moscow, so locals know that it is very cold here only in winter, while in summer it can be much warmer than in London. However, it doesn’t stop people from asking why I feel cold if I’m from Russia. Well, my answer is that I’m not a polar bear with fur to stay warm always.

In Russia there are also prejudices about Britain. The most popular of them is the one about British politeness. I would not say that it is wrong because I felt it myself. When I came to the UK it was weird that when I stepped on someone's foot or pushed people with my elbows they said sorry even though I was the one who was supposed to apologise. Finally, it became my habit too, but when I came back to Russia I unintentionally continued to be polite and very few people understood me.

Sometimes, the courtesy of English people becomes unbelievable and causes many problems with understanding for foreigners. In Russia, if someone tells me that he is not happy with my work it means that I should just work a little bit harder. If someone from the UK tells you the same thing you should think about the phrase twice because it probably means that I’m on the verge of being fired.

In Russia there are many prejudices about Britain. Source: Tatiana Shilovskaya

Also, everybody knows about British fashion and style. Imagine my surprise when I realised that people don’t wear high heels in everyday life like in the movies, or extravagant clothes. English people tend to wear quite thin clothes. For example, it’s ok if a girl puts on a summer dress when it is 15 degrees above zero outside (and after that they ask me about feeling cold?).

Nowadays the world is facing many global ecological problems, including global warming. Britain is among the first countries seeking to improve the environment, while Russia is not. That’s why it is curious for a Russian to find that English people still have separate water taps whereas Russia rejected usage of those a decade or so ago.

Also, in Russia it is normal to defrost products under the hot water tap and forget about it for half an hour. It happens because bills for water in Russia are much lower than in the UK.

Another weird thing about Russian water is the summer disconnection. All cities in Russia have centralised systems of heating and water supply, which is why every summer workers dig up pipes to fix or replace them. As a result, throughout the summer months, different areas of a city will live without hot water for about two weeks and have to heat their water in kettles and saucepans to have a shower.

Besides unlimited usage of water in Russia there is no lack of gas, electricity or petrol. That’s why heating in the UK in winter didn't seem to be working too well to me and I was freezing even under two duvets. You can imagine how weird that seemed for a person who was freezing when it was around 0 degrees outside while I was fine when it was 20 degrees below zero in Russia.

Another British way to save the planet is recycling. In Russia recycling is usually carried out by big corporations which have a lot of paper to throw away or something like that. In the UK, everyone separates the litter at home. Once I threw away a plastic box and my neighbour saw me do it. He immediately stopped me, showed me a special bag for plastic and explained that the place I wanted to put the box was for other rubbish besides plastic.

The UK is a country which takes care of its tax-paying workers, which is why the normal working day can’t be longer than 8 hours. It is the same in most countries of the world, including Russia. However in Russia you can find anything working 24 hours a day. Shops, restaurants, pharmacies and hospitals are working even at nights.

In the UK there is almost nothing working after 11pm. From one side, it is of course great, no one is working longer than he should, and from the other I had several unpleasant stories because of that.

During the celebration of the Queen's birthday. Source: Tatiana Shilovskaya

The first time I faced that problem was at night when I started having a severe headache and was shivering. Because I knew that in Moscow you can find even a barbershop working at night I decided to catch a bus to the centre and buy something at least for the headache (buses in England work even at 4am whilst in Russia no public transport works at night).

To say I was surprised when the bus driver told me that there is no pharmacy or even shop working at night in Brighton is to say nothing. Having had to accept that fact I had to go to bed and try my luck in the morning.

My life in the UK was fascinating and confusing at the same time, but looking at those differences I’ve realised that if I was an English person in Russia I would have to face maybe more unclear things. What would be my disappointment if I had been waiting to see the bears and would not find any?