Who is Mizulina, and how can the majority be confronted? 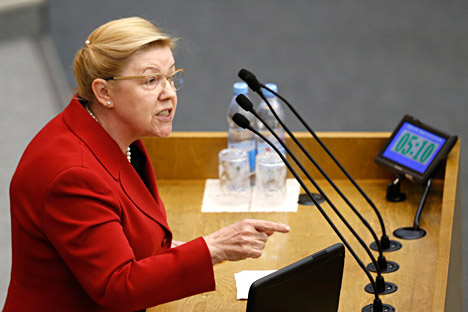 RBTH editor Kira Egorova asks how ordinary Russians can stand up to lone officials who seek to impose their subjective interpretation of morality on the nation by passing heavy-handed laws and frequently nonsensical laws.

I heard somewhere that in English soccer slang there is a new verb ‘to kerzhakov’, coined by a Guardian journalist – which means to miss a scoring opportunity from a perfect position – after the Russian attacker Alexander Kerzhakov failed to find the target in seven attempts in one match.

By the same logic, you can enter into the lexicon of political slang the verb ‘to mizulina’ after the Russian parliamentarian Yelena Mizulina. This would mean to impose severe restrictions, based on a subjective perception of human values. For example, imagine that you can no longer utter the phrase "gays are also people," because it could be seen to be extremist... Yes, this is the reason. Because that's what Mizulina said.

To find out more about this woman it is enough just to google her name. The search engine will reveal all the cards immediately. Yelena Mizulina is an opponent of abortion, LGBT advocacy, surrogacy, mat (obscene language) on the internet ... In fact, she is the author of the most famous prohibitive bills in Russia over the past three years.

The cherry on the cake of these continuous restrictions is Mizulina’s latest statement that the iPhone should be banned because it is a tool of sexual abuse committed against children.

“How can I do this with my iPhone?” you ask in incredulity. Mizulina’s answer is: Because child pornography is shot and uploaded using iPhones more often than with other smartphones.

After this, you lose the power of speech and sit in silence, probably with a confused expression on your face. Because no country in the world has yet banned a kitchen knife for the reason that it can harm a person.

“She cannot be serious, right?” you ask. No, actually, she can. Restrictive laws in Russia are issued with such frequency that the only logical thing is to question the seriousness of the Russian parliament.

The question is this: Is there in Russia a force capable of confronting Mizulina and what kind should it be?

A month ago, I noticed that a particular post kept appearing in my social network news feeds, calling for the collection of signatures to send Mizulina for psychiatric examination.

This farcical internet poll got more than 100,000 signatures in a couple of months! Imagine - more than 100,000 people went to the trouble of following the link and entering their personal data. It looked like a protest, albeit in a comic form.

“100,000 signatures compared to the 140 million inhabitants of Russia - it's a drop in the ocean. Most Russians do not care about Mizulina! Therefore, even if a million people express protest - it will not work” – that’s what my friends told me.

And their argument, admittedly, wrecks my vision of civic awareness. In Russia, for some reason, people love to compare themselves with the majority...

Although the problem here, of course, lies not in the majority and the minority. In my opinion, the problem is the unwillingness to do something, which sees its expression in the argument "why resist, if we are a drop in the ocean." But in some cases, qualitative resistance can be much more efficient than quantitative resistance. And here is an example.

Arts world up in arms as Russia bans swearwords in films, books and TV

In 2012 Mizulina came to prominence as the author of the controversial law on a blacklist of internet sites containing alleged child pornography, extremist material, and other content illegal in Russia. During consideration of the bill, Wikipedia’s Russian-language team went on strike because the text of the future law was considered grounds for real censorship. Wikipedia’s strike found support among many of the largest sites and aggregators on the Russian internet.

Mizulina reacted aggressively. She labeled Wikipedia "cover, like for terrorists,” and even voiced the suspicion of there being a "pedophile lobby" behind Wikipedia. But despite these accusations, Wikipedia representatives were eventually included in the working group to finalize the bill.

It's pretty simple: Laws are not established by one person alone, and they certainly cannot be written subjectively. And if there is a civil initiative that can forget about the strange and ephemeral notion of "majority" and loudly tell everyone about its opinion, eventually we get a force capable of resisting anyone.

And I’m happy to think that at least 100,000 people in my country feel the same way.