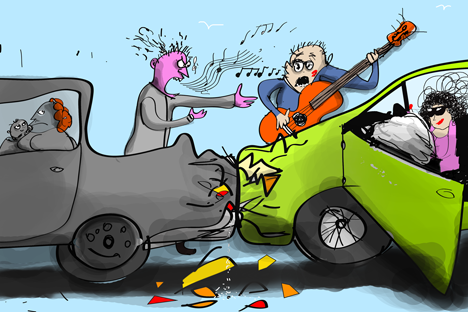 People have always looked to the lyrics of popular music to find an expression of their own feelings and emotions (whether it is joy, grief or amazement) or just explain the realities of life succinctly. Lines from certain rock songs, however, have transcended the musical genre completely and passed into everyday usage.

"A generation of janitors and watchmen"

In the 70s and 80s many musicians, artists and writers refused to comprise with the Soviet authorities and follow the ideological canon.

They preferred to get an unskilled job, which provided an opportunity to more or less freely dedicate their spare time to their creativity. The most common jobs were janitor, watchman and stoker in a boiler room.

The schedule required a day's work every three-four days. This social phenomenon became famous in 1987 thanks to the song A Generation of Janitors and Watchmen by the band Akvarium.

A clip from the film Rock (1987) by Alexei Uchitel. Source: YouTube

Bandleader Boris Grebenshchikov knew what he was singing about. He himself had worked as a watchman in the 80s, and in his free time played concerts and recorded his music.

"Everything is going as planned"

This has been the Russian underground's anthem for several generations now. Grazhdanskaya Oborona singer Yegor Letov wrote the following text as an expression of absurd anti-communism: "The key to the border is broken in half / while our father Lenin is dead completely / he's decomposed into mold and lime honey / and perestroika is continuing and going as planned…"

It is interesting that in the 90s, after the collapse of the USSR, Letov radically changed his views, abandoning the anti-communist underground for the anti-capitalist one.

The song for him became a symbol of the stoical fight against any establishment. Today everyone is still singing it - adolescents on the streets, opposition demonstrators, old hippies in their kitchens.

The expression "everything is going as planned" has come to mean "nothing depends on us." The "plan", according to Letov, is the matrix of the whole Russian life.

"Wish me luck in battle"

This line is from the song Blood Group by the band "Kino." It is another adolescent anthem, not social, though, but individualistic, glorifying a personal, even samurai-style heroism during an honorable fight.

This is what is usually said when you have to go and do something important, fatal, dangerous, at times even hopeless.

The song concludes the cult film The Needle (1988) by Rashid Nugmanov, in which the protagonist is played by Kino frontman Viktor Tsoi.

He plays a sort of Russian Bruce Lee: almost stabbed to death by a thug, he miraculously gets up and starts throwing around all the bad guys with his martial arts techniques.

A clip from the film The Needle. Source: YouTube

The real hero was reticent, confident, and unflinching. During the cynical, nihilistic 2000s, Tsoi's characteristic late-1980s pathos was mocked by Sergei Shnurov, leader of the band Leningrad, who sung: "Can you shut up for five minutes at least? / Or wish me luck in battle! / 'Blood group' is my favorite song / When I'm down I sing it!"

"A real Indian feels great any time, any place"

The "real Indian", from a song by Fyodor Chistyakov, lead singer of the group Nol, actually referred to an ordinary Russian guy, who "needs very little" and who always feels great: he'll either "smoke a cigarette (to clear his head)," or he'll sing about "some young grass" and "pine needles and cones."

Of all Russian bands of the 80s, Nol was perhaps the most daring; it also most vividly expressed the essence of Russian national character.

Music critics compared Fyodor Chistyakov to Jim Morrison. Indeed, music of Nol at times resembled The Doors in spirit, only with Russian character.

Another popular meme from a Chistyakov song is, "I'm walking along, smoking." It was remembered a month ago when Russia passed a law against smoking in public places.

The popularity of this phrase is completely illogical. Some time ago Chaif, a band from Yekaterinburg, wrote a reggae song about a 1998 World Cup soccer match, with a simple refrain expressing the fans' emotions: "What pain! What pain! Argentina beat Jamaica 5-0."

Russians had been unusually concerned about the soccer passions of a foreign continent. Jamaica's pain had somehow become Russian pain, too. Ever since then the ironic expression "what pain!" has become part of the everyday lexicon.

It is frequently used when people complain about insignificant problems, for example: "I was stuck in traffic for an hour" - "what pain!"