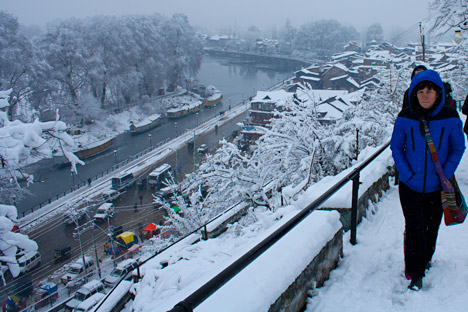 A Russian tourist in the Indian city of Srinagar. Source: Getty Images / Fotobank

Simplified visa procedures need to be followed up with more direct flight connections between the two countries.

One of the biggest takeaways from India’s latest budget is the announcement of a 6-month deadline for the implementation of an electronic travel authorisation for a visa on arrival facility in 9 airports in India.  It is widely believed that Russia will figure in the list of countries whose citizens will be able to avail of this facility. Such a step is being welcomed by Russian tour operators who believe that more people from the country are looking to explore the diversity of India, instead of just keeping Goa on their radars.

During my interactions with young people in Russia over the last few months, I have increasingly noticed a new level of curiosity about India. It isn’t just the “new age” crowd that wants to know more about the country, but also many well-heeled and well-travelled people who have had their share of visiting Europe and North America. India still evokes a sense of exoticism in the country and a lot of people are eager to visit, despite getting flooded with news about women’s safety issues from the Indian and western media. Given the impulsive nature of young Russians, the opportunity to make an online application, buy a ticket and then fly off to an interesting country like India, all within a span of a couple of days, would be very tempting.

There is bound to be some muttering from India that the country should follow a reciprocal visa policy and not offer a virtual visa on arrival to Russians when the same is not offered by Moscow to Indian citizens. Whether we are ready to accept it or not, it is a reality that human trafficking is an industry that thrives in India. Since Russia is geographically close to Europe, human smugglers would use it as a transit point for illegal immigrants. Moscow is bound by treaty obligations to pay for the repatriation of all illegal immigrants who enter the EU using its territory.

While reciprocity is unlikely at the moment when it comes to visa on arrival, it is not particularly difficult for Indians to obtain a Russian tourist visa anymore.

I once believed that reciprocity was the best way to deal with the visa system, until a friend from Serbia explained why she supported her country opening its doors to tourists from even former enemies like America. “Let them come and spend their money here,” she said.

Russian tourists are in demand in many parts of the world, since they are impulsive spenders. Even in Europe, it’s the Russian tourists who spend the most while shopping for high quality brands, since prices would be much cheaper than back home. Most of my Russian friends rave about how so many things from food to accommodation to transport to clothes in India cost half of what they do in Russia. Tourism generates about 6.6 percent of India’s GDP, and this will only go up with simpler visa procedures. Russian tour operators foresee a rise of around 15 percent in the number of Russian citizens visiting India when the new system is put into place.

An increase in Russian visitors to India will also help strengthen people-to-people contact.  Stereotypes and common misperceptions are bound to reduce from both countries as more middle class people get to interact with each other. Over a decade ago, many Middle Eastern and North African countries started offering visa on arrival to Russian citizens and as a result, not only did tourism increase between these regions, but many business opportunities were generated. Many a time, smaller businessmen sight the opportunities to do business while on holiday. An increase in tourism could easily lead to greater trade between Russia and India.

Increased connectivity a must

Easier visa procedures have to go hand in hand with greater air connectivity between the countries. If we discount the charter flights between Russia and Goa in the tourist season, the only two cities that are connected with direct flights are Moscow and New Delhi.  With Air India restarting its services to the Russian capital later this week, the number of weekly direct flights will rise to 11. This simply isn’t good enough.

One hopes that the countries work on increasing the number of flights between different cities. Many Indian visitors would love to go directly to St Petersburg and cities in Siberia, skipping Moscow. India’s low cost carriers should also be encouraged to fly to Russian cities. Their cost competitiveness would help bring in more Russian visitors to India.

India should ideally look at making sure that all 9 cities, where the e-visa system is being put in place, are connected with direct flights to the countries being offered this facility. This, in addition to lower airport costs and taxes, would give a major boost to both the aviation industry and tourism alike.