Why INDRA matters to Russia and India 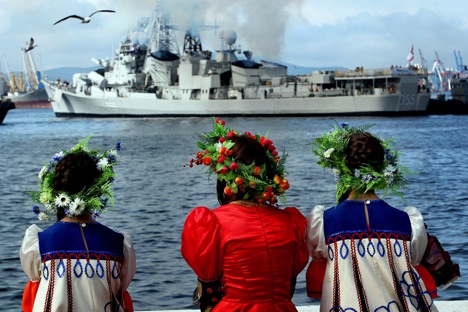 The destroyer Ranvijai is moored during the welcoming ceremony for the Indian Navy’s warships in Vladivostok. Source: Vitaliy Ankov / RIA Novosti

The INDRA series of exercises between Russia and India is vital for improving the military readiness of the defence forces of the two countries.

In April 2011, the Indian Navy’s three most renowned destroyers, INS Delhi, INS Ranvir and INS Ranvijay, sailed over 8500 km to the eastern Russian port of Vladivostok for the INDRA joint exercise with the remnants of Russia’s once mighty Pacific Fleet.

According to some observers, the Russians were showing their displeasure at losing out in the Indian jet fighter competition. But it is highly unlikely the professional Russian military would agree to insult their Indian friends at the behest of some wound up diplomat in Moscow.

The more plausible reason is the Russian Navy was in such a poor state that it simply cried off. It’s like you don’t invite anyone inside your house because it is so shabby.

With $132 billion earmarked for shipbuilding through 2020, the future Russian Navy could turn out to be a formidable force. But if funds could make a navy, then Saudi Arabia and Qatar would own the leading navies of the world. At any rate, the bulk of Russian funding will go to attack and SSBN (nuclear powered, ballistic missile) submarines.

The current reality is that the Russian fleet has a comparatively small number of ships that are able to deploy far from their ports for extended periods. No surprises really. The Russian Navy has always been a submarine focussed force, and its surface vessels are not really in the same class as the US Navy’s.

The Russian Navy looks good when compared with its Indian counterpart. With 11 major accidents claiming the lives of 21 officers and sailors between March 2013 and August 2014, the Indian Navy currently ranks among the most dangerous fleets in the world. The shocking episode was the INS Sindhurakshak explosion. On August 14, 2013 while it was berthed in Mumbai harbour, blasts ripped through the attack submarine’s torpedo compartment, killing 18 crew members. Expired batteries were reportedly the cause of the disaster.

On March 7, 2014, just weeks before the Indian Navy's most modern destroyer, INS Kolkata, was to be commissioned, Commander Kuntal Wadhwa died after inhaling carbon dioxide leaking from a malfunctioning unit while the vessel was undergoing trials at Mazagon Docks, Mumbai.

Both navies not only have a blemished record at sea but also lack the end to end capabilities required to qualify as world class fighting forces. Take the August 2009 Kursk submarine disaster in the Barents Sea. The Kursk was the most lethal and modern hunter-killer sub in the world yet when it sank after a mysterious explosion or collision, it was Norwegian – not Russian – divers who opened its hatches seven days later. Again, it was a Dutch team that raised the hull to the surface a year later.

Similarly, five months after it sank, Sindhurakshak was raised to the surface by an American – not Indian – salvage firm.

Under such circumstances, joint exercises such as INDRA – derived from India and Russia – are vital for keeping up morale, improving sailing skills, and monitoring the seaworthiness of naval vessels.

The Russian and Indian navies cannot train extensively with foreign navies because of the absence of the trust factor. Recently, an Indian warship that docked during a friendly visit to China hosted a Chinese admiral who insisted on entering the ship’s bridge – the commander’s control room. The Indian captain firmly but politely declined.

Similarly, it is an open secret that western countries allied to the US have extensive espionage networks in India. They will not lose the slightest opportunity to do on the sly what the Chinese admiral was trying to do openly. US whistleblower Edward Snowden has revealed that American spying on India – including the ruling BJP – has been on the upswing. India knows this very well – when the Indian Air Force trains with the Americans and British, its Sukhoi-30MKI pilots are under orders not to use the aircraft’s radar at any time.

The collapse of the Soviet Union meant that the Russian Navy, especially its mighty Pacific Fleet, which was transformed into a mighty fighting force by Admiral Sergey Gorshkov during the 1970s, was allowed to rust in port because of the economic collapse that followed.

The military, which was considered irrelevant during those days of misplaced Russia-US bonhomie, was the first casualty. The Boris Yeltsin era saw steep cuts in defence budgets which led to the collapse in shipbuilding and naval activity in Russia throughout the 1990s.

During this period of neglect, the Russian Navy had no presence in the Indian Ocean. The navy that in 1971 threw a cordon sanitaire around India to protect it against an American-British naval attack on Indian cities, was idling – and rusting – at Vladivostok.

Such a state of destitution continued until 2001, when a contingent of Russian Navy vessels, docked at Mumbai. In April 2003, nine warships of the Russian navy departed from their bases at Sevastopol in the Black Sea and Vladivostok for the Indian Ocean. These units engaged in a number of exercises with the Indian Navy. Russian Defence Minister Sergei Ivanov proposed joint naval exercises to be held later that year.

While protection of navigation against pirates and terrorists as well as combat training were key aspects of INDRA-2014, what’s more important is do the two navies have a common operational philosophy?

It has been reported that both India and Russia have held discussions in this matter, following the visit of the Russian Naval chief, Admiral Vladimir Vysotskiy, to New Delhi. But do Russia and India have a common enemy or goals on the high seas?

The Indian Navy has long given up on its dream of seeing the end of American presence in the Indian Ocean. Its focus is now China, which has swooped down into the Indian Ocean, including the Arabian Sea and Bay of Bengal in a big way. Stopping the Chinese from encircling India with bases in Myanmar, Sri Lanka and Pakistan is India’s priority now.

The Russian Navy has a different aim. “Russia has extensive coastlines as well as assets such as off-shore drilling sites to protect,” says a report by the School of Russian & Asian Studies. “Russia's export economy requires that ports and transport routes be protected and gives Russia a substantial interest in helping international efforts to combat piracy.”

Because India and Russia do not have an adversarial relationship, they should ideally train more often. But in fact since 2003, both countries have conducted just five of the INDRA series military exercises between the armies and navies of both sides. On the other hand, India has conducted over 60 military exercises with the United States.

As panic buttons are being pressed in the Middle East, Afghanistan, Ukraine and the Pacific, there is the danger that India and Russia will get sucked into a global conflict. In such an eventuality, India may find itself ranged against the very players – the West – with which it trains regularly. On the other hand, by syncing their military forces, Russia and India could gain better synergies.

As they say in the military: If you train hard, you fight easy.