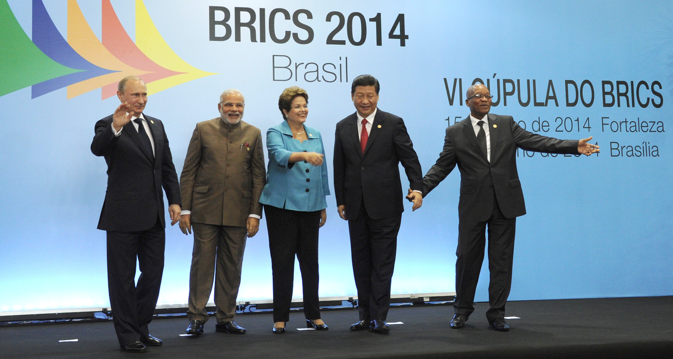 The BRICS have become the default movers and shakers in the global economy, including the green economy. Source: Itar-Tass

Flush with cash, the BRICS have stepped up their investment in green technologies, even as Europe and North America remain financially and politically paralysed.

The need to limit carbon dioxide emissions in order to avoid dangerous climate change was once a Western-led initiative. It was blasted as a scheme that was being shoved down the throats of emerging economies, which clearly could not cut emissions and grow at the same time. How times have changed.

The economic and political turmoil in the West has ensured that the leadership in the sustainability sector has passed to the BRICS (Brazil, Russia, India, China, South Africa) group. These countries have made significant and visible commitments to a low-carbon future.

“At a time when most Western countries are politically paralysed or heavily entrenched in political debates on greening and also have little financial room to manoeuvre, this momentum within the BRICS has unmistakable global implications – policy and otherwise,” says Professor Hubert Schmitz, who leads the research programme on green transformation at the UK-based Institute of Development Studies (IDS).

He adds: “Most Western countries cannot carry out their expected role of leading the green transformation. In contrast, the BRICS, in particular China and India, have stepped up their low carbon investment.”

At the same time, the BRICS are among the leading contributors to the recent increases in carbon emissions. While the world emitted 48 percent more carbon dioxide in 2012 over the previous decade, China’s contributions increased by 240 percent. China is now the world's biggest polluter and is responsible for a quarter of the world’s emissions, followed by the United States, India and Russia in that order.

But the BRICS are making amends. “The BRICS have become the default movers and shakers in the global economy, including the green economy,” says Schmitz.

According to Schmitz, two transformations are likely to dominate the first half of the twenty-first century. One is the shift in economic power from the West to the East. The second is the transition from a high to low carbon economy. “The first shift is at an advanced stage; the second at an early stage,” he says.

Ringing in the low carbon future will require strategic intervention by governments and the BRICS are perhaps the only group in a position to achieve such an outcome. These emerging powers have entrepreneurial acumen, declining levels of internal indebtedness and increasing foreign exchange reserves.

What does this mean for the low carbon transformation? Will it make the transformation faster and cheaper? There are early signs that this might happen, says IDC. For the past three years China has been the world’s number one investor in renewable energy and India has had the highest recent growth rate. This suggests an accelerating influence on the part of the rising powers.

Have money, will go green

There is also a cost reducing influence. For instance, China has slashed the price of solar panels and pushed down the price of wind turbines worldwide.

Green technologies used to be dominated by mostly European companies, but lately, China has been able to catch up quickly such that it has become the world’s biggest producer in some of these sectors, notably solar panels and wind turbines.

In 2005, there were seven European companies in the list of top 10 global wind turbine manufacturers. Plus, there was one each from India, Japan and the US. Fast forward to 2010 – the picture changes dramatically and there were four Chinese, four European, one US and one Indian company.

The power balance in the green sector is being defined by economic clout. The BRICS’s main strategic advantage is their fat cash chests. Because the investment requirements in green tech are high, and the time horizons long, being able to finance such investments is critical.

Western governments are also handicapped because they are under severe budgetary pressure to reduce subsidies and incentives. Green tech, therefore, is unable to flourish during a time of prolonged financial austerity. For instance, Britain’s Office of Budget Responsibility says austerity measures will have to continue for the next 50 years to avoid a financial time bomb.

While Western nations are strapped for funds and also fritter away cash on wasteful wars, the BRICS have steered clear of such roadblocks. China, for instance, is flush with funds. The Chinese firm Sinovel has a $6.5 billion line of credit from government-owned Chinese banks. “This financing element may thus help Chinese firms to get a foot in the door in the US and European markets,” says IDC.

India is among the leading investors in green technologies, and is expected to install 3 gigawatts (GW) of solar by 2016, compared with the 54 megawatts of solar installed in 2010. The government has a top-down plan to hit 20 GW of solar by 2020, and big power companies and startups alike are developing solar project development businesses.

Despite being a hydrocarbon superpower, Russia plans to start active development of renewables in the coming years in an attempt to reduce dependence on oil and gas. This is expected to take place as part of the recently approved state programme “Energy Efficiency and Energy Development in Russia” for the period 2013-2020.

The Energy Strategy to 2030 stipulates that the share of renewables must remain at least 4.5 per cent during 2020-30. According to more recent analysis by the Russian Energy Forecasting Agency, reaching the target would require 14.7 GW of new installed renewable energy capacity. Reaching the 4.5 per cent target would displace more than 36 million tonnes of carbon dioxide per year.

Survival of the richest

Another notable aspect of the energy sector is that because of the strong competition from China, some European firms have pulled out of the solar power industry. “Siemens is the most prominent example – widely reported in the media. Competition from China has also contributed to the problems encountered by Vestas, Denmark’s iconic wind power company. Vestas is increasingly sourcing services and material inputs from abroad and might even be taken over by an Asian firm.”

To be sure, the green sector still lags behind the traditional economy. IDC estimates that for each billion of low carbon investment there is a trillion of high carbon investment globally. This gap also shows the potential of the renewable energy sector.

Twenty years of global climate negotiations have yielded very little because the debate was conducted in terms of developed versus developing countries or established versus emerging powers. The challenge lies in identifying and forging alliances across these divides. “Such focus on alliances offers the best hope we have to accelerate the low carbon transformation within West and East and across the divide,” says Schmitz.

Since the general public has become inured to repeated warnings of climate catastrophe, perhaps positive examples of cooperation and results will inspire policies and actions.