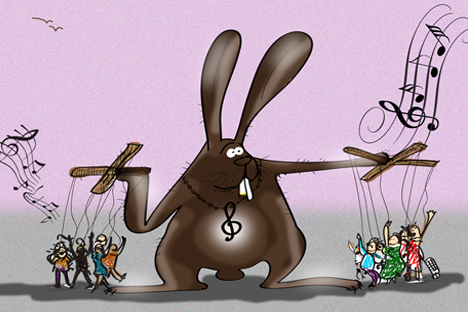 The Soviet pop song, for all its merits, was rather puritanical and restrained. After the fall of the Soviet Union and the removal of the restrictions of censorship, Russian pop music broke free and boldly began to dance. Sometimes vulgar, occasionally tasteless, at times funny, Russian pop was always a perfect reflection of its time. Many pop lyrics became came into everyday use. Here are a few highlights.

In 1979, the four-part film The Meeting Place Cannot Be Changed (released in the U.S. as The Age of Mercy) was shown on Soviet television for the first time. It was a story about the Moscow police and their struggle with the Black Cat criminal gang in the late 1940s. Famous Soviet singer-songwriter Vladimir Vysotsky played the lead role, detective Gleb Zheglov. The film became a cult classic and lines from it were quoted everywhere. In 1990, the group Lyube released the song “Atas!” (“Watch Out!”), which began with the lines “Gleb Zheglov and Volodya Shaparov did not stay up in vain. Gleb Zheglov and Volodya Shaparov catch the gang and its boss.” Lyube, which had only recently formed, was trying to create an image as regular Joes – guys who were rough on the outside, but essentially fair and reliable. In Russian “Atas!” is a slang expression that is used to warn of danger. The vigorous refrain from the song, “Atas! Cheer up, working class! Go out, boys; love some girls!,” became a meme.

The duo Tatu was formed in 1999. The name of the group was an abbreviation of the word “tattoo” and could also be read as a combination of the two pronouns “this one … the other” which had the implied meaning of “this one loves the other.” The two women who made up the group played up the idea that they might be lesbians, and their first songs were about rejecting conservative social values. Tatu’s first hit was “I went crazy;” their second one was “Not Gonna Get Us!” Fifteen years later, the song’s chorus, which originally had a metaphorical meaning along the lines of “they can’t stop us from doing what we want, has been replaced by a remix of the straightforward lyrics. “We’ll run faster than everyone else and become the victors” was the leitmotif at the 2014 Winter Olympics Opening Ceremony in Sochi.

In 2001, the duo Ruki Vverh! (“Hands up!”) wrote a song which was performed from the perspective of a young woman, who asks her boyfriend to “Take me quickly, carry me across a hundred seas and kiss me all over. I’m 18 already.” This chorus became the object of fierce criticism because the word “uzhe” (already) at the end of the phrase did not match the phonetic rhythm at all with “vezde” (all over). Instead, the song seemed to beg for a closer rhyme – in this case, an obscene word for the female sex organ. It was precisely this ambiguity that made the line exceptionally popular.

In 2003, Pierre Narcisse, a native of Cameroon who was then a student in the journalism department at Moscow State University participated in the second edition of the television show “Fabrika Zvezd” (“Star Factory”). Although he did not win a prize, his playful song in which he ironically poked fun at the dark color of his skin became a hit. “I’m a chocolate bunny. I’m a tender scoundrel. I’m 100% sweet. I’m a chocolate bunny. And when my lips touch yours, I melt so easily.” This refrain was even taken up by light-skinned Russian men: when making erotic advances, it was sufficient to whisper “I’m a chocolate bunny.” No girl could resist such a “tender scoundrel.”

In 1991, the female group Kombinaciya wrote the song “Buhalter” (“Accountant”), which had the straightforward chorus: “Accountant, my dear accountant. That’s how he is – so simple. Accountant, my dear accountant, there will be happiness if there is peace in the soul.” At that time, a male accountant was usually considered a professional failure since nearly all accountants were women. The idea of the song was that it doesn’t matter what kind of job your man has, as long as he is yours. Not long after the song was released, many former accountants became financiers and heroes of the new capitalist economy and the lyrics unexpectedly took on a new meaning.

This line from a song by the iconic diva Alla Pugacheva became another meme from the series “Women’s Dreams”: “Oh, what a man he was – a real colonel! In this case, the meme was completely separated from the contents of the song, which tells the story of an impressive rogue who poses as a colonel. This thematic baton was later picked up in a song by Nataly, who sang “Oh, God! What a man! I want a son from you and I want to have your daughter.”

The chorus of the song “Weather Home” by Larisa Dolina has become a sort of hymn for those who have found happiness in a strong family and strong values. “The most important thing is the weather in the home, and everything else is vanity. There’s me and you, and everything else can easily be sorted with the help of an umbrella.” The success of the line can partially be attributed to the fact that Russians, like Americans, are extremely interested with weather and it is the most popular subject on the local news.

“My thoughts are my steeds”

Despite its militarized title, Oleg Gazmanov’s song “Eskadron” (“Squadron”) is about something else: “My thoughts are my steeds. Just like sparks, they will light up this night. The squadron of my wild thoughts overtakes the madness of heady winds.” There are some inconsistencies with the visuals in the text since it is not the thoughts but the performer who gallops: Gazmanov usually performs this song with a greatcoat draped over his shoulders, and between verses he throws it onto the stage then does a backflip followed by a split. The meme “my thoughts are my steeds” is usually used ironically: when someone speaking wants to say something important but has trouble adequately putting it in words, he can jokingly recover with the phrase, “My thoughts are my steeds.”