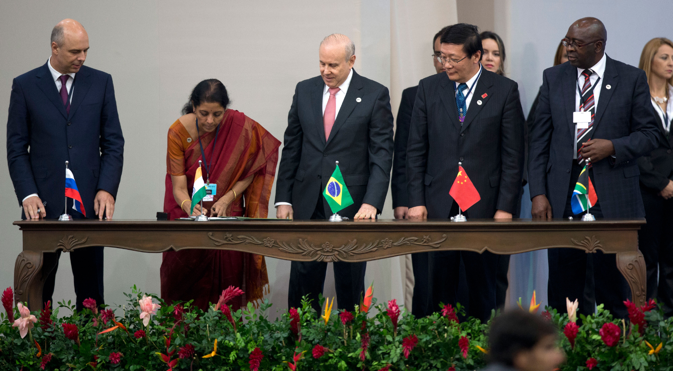 Officials from the BRICS countries sign the agreement to form a BRICS Bank. Source: AP

Considering that the World Bank has been around for some 70 years, the BRICS bank will have a hard time dislodging it from the banking rankings.

Never underestimate your enemy. That ought to be the New Development Bank’s defining principle when it opens for business in the year 2016 in Shanghai.

The NDB may come out all guns blazing, offering stiff competition to the US-controlled World Bank and International Monetary Fund, but considering the Bretton Woods twins have been around for some 70 years, unseating them from the lending top spot will take a lot of hard work.

First up, the World Bank has $223.2 billion of subscribed capital (paid in capital plus callable capital) whereas the NDB has started off with a modest $50 billion, moving gradually to $100 billion. But these are mere figures. If the BRICS wish – and if the need arises – they can ramp up the NDB’s capital base.

The World Bank’s biggest advantage is its reservoir of experience. With 188 member countries, it has been funding all sorts of projects across the planet. And as we know, experience is hard to match.

South Africa-based consultant Alexander O'Riordan says the real power of the World Bank comes from being an agenda setter or “thought leader”. “In the international development space, there is no comparable institution able to attract the best talent, finance the biggest and most important studies and able to disseminate its agenda as wide and deep as the World Bank,” he says.

“Simply peruse the internet or academic journals: whether it is climate change or early childhood development, the World Bank has likely already done the study and controls the best data available to make evidence based policy recommendations.”

In India, for instance, almost every economist, consultant and bureaucrat dreams of bagging a World Bank job, preferably in the United States or failing that, in Europe. What the heck, even if the location is in India, it’s welcome. The frenzied lobbying that takes place in New Delhi’s bureaucratic fraternity to be appointed the Executive Director (regional head) of the World Bank is a pointer to the enduring appeal of the Bretton Wood sisters.

Besides opening doors in the corridors of national governments, a World Bank job is all about the perks. As well as free accommodation, employment comes with a stratospheric salary paid in U.S. dollars and more importantly tax-free. And once the contract ends, an ex-World Bank employee is likely to land a cushy job in the private sector.

You get the point – in the realm of institutional banking, a World Bank assignment carries considerable cachet. Borrowing a phrase from the Sicilian mafia, it’s like “being made.”

Sometime during 1994, when India was introducing economic reforms, a senior Economic Advisor in the Economic Affairs Department, Ministry of Finance, told this writer how waves of World Bank cronies had started infiltrating key areas of the ministry.

This economist said anyone who protested at the virtual World Bank takeover of the ministry was booted out. Because of his independent stance, he was soon transferred to the less prestigious Railway Ministry. His colleague, also an Economic Advisor, was less lucky. For his ‘intransigence’ he was sent to the Coal Ministry – not in Delhi but Dhanbad, the HQ of the coal mafia and one of the most dangerous assignments for any honest civil servant.

So how can the NDB counter this mafia? First up, there should be a level playing field – either abolish the sinecures and free-loading of the World Bank mafia or offer the same terms to NDB economists and consultants. In the rarefied field of institutional lending, talent will follow the money and perks. If the NDB is unable to compete in the compensation area, it will end up as the home of the World Bank discards.

But that’s the easy part. The real challenge will be investing in intellectual capital in order to create wide ranging research and policy analysis mechanisms at the NDB. Most of the BRICS countries are thought leaders, with India, Russia and China being among the biggest exporters of economists to the West. Like Raghuram Rajan, who returned from the United States to head India’s central bank, this flow needs to be reversed. The NDB can be the ideal platform for this.

According to the World Bank, currently the five largest country exposures are to China, Brazil, Turkey, India and Indonesia. The US-based Council on Foreign Relations notes that China, India and Brazil have borrowed $66 billion – or more than the entire subscribed capital of the NDB – from the World Bank.

At the bank’s launch, Russian President Vladimir Putin spoke about the BRICS’s vision for the NDB: “The international monetary system … depends a lot on the U.S. dollar, or, to be precise, on the monetary and financial policy of the U.S. authorities. The BRICS countries want to change this.”

But ironically the entire paid-in capital stock of the new bank is in US dollars. In contrast, just 10 percent of the World Bank’s paid-in capital is in American dollars; the rest being in the national currencies of member countries.

This will, of course, change with the increasing use of mutual currencies by the BRICS but it needs to be speeded up.

According to the latest figures provided by the World Bank, the combined stock of developing countries’ external debt stood at $4 trillion at the end of 2010. In a report published in January 2014, the European Network on Debt & Development said developing countries face interest payments of almost $800 million a year on loans provided by Europe alone.

So essentially the Western lending system forces developing countries to give priority to credit repayments over basic social services.

John Perkins brought it all out in the open when he wrote the explosive ‘Confessions of an Economic Hitman’. Perkins revealed that hundreds of consultants like him were employed by US intelligence agencies to play a leading role in the economic enslavement of several developing nations.

In Ethiopia, for instance, World Bank programmes discriminated against people based on their political affiliations. The repetitive debt default by Argentina is a stark example of how a country can be trapped in the debt cycle despite decades of repayments.

By becoming a lender with a heart, the NDB can end the system of economic apartheid that the West has institutionalised.

Remember the bare shelves that were the hallmark of communist countries? How strange they seemed in contrast with the product-laden supermarket shelves in capitalist economies. The point is competition is usually a good thing. Simply by its existence the NDB can ensure the World Bank and IMF do not run roughshod over developing economies.