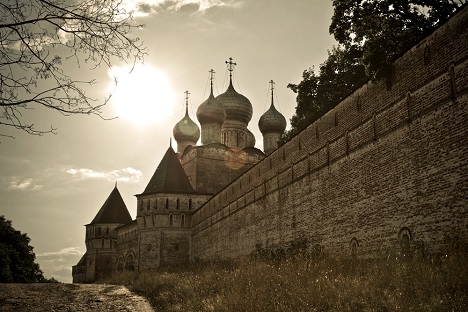 Russians are increasingly returning to their religious roots. Source: long-way.ru

Russia is so rich in eastern and western heritage that it is a natural bridge between both continents and their diverse cultures.

For centuries the question of whether Russia is European or Asian has been debated both inside and outside the country. A larger part of its huge landmass is located in what is Asia, while more Russians live in the country’s European part. By being neighbours with countries as distant as Finland and China, Russia has always absorbed some of the best qualities and characteristics from both continents.

The Russian cultural renaissance of the 18th century produced geniuses in art, literature and music and these are proudly claimed by Europe as part of the greater European heritage. It’s next to impossible to go through the personal libraries of European intellectuals without finding a book written by Fyodor Dostoyevsky or Lev Tolstoy. The classical music concert scene in most European countries focuses a lot on compositions of legends such as Pyotr Tchaikovsky and Sergei Rachmaninoff.

Russia shares a lot with northern Europe, right from a love for saunas like in neighbouring Finland to the wonderful tradition of summer houses that bind the Russian and Swedish souls. There’s also this celebration and passion for summer and warmth that can be likened to similar sentiments in Scandinavia. Despite a strong European heritage, which manifests itself in the best way in the ornate imperial capital of St Petersburg, it’s hard to get a feel of completely being in Europe when in Russia.

Muscovites may be more European when it comes to their behaviour with neighbours, especially in the newer residential high-rises, but in the regions, a large number of people know a little more about the inhabitants of their five-floor buildings than necessary.

It’s not just in the ‘oriental’ onion domes that Russia’s great Asian heritage comes shining through.  There is something innately Asian in Russian culture.  The country is known for its hospitality and the wholesomeness and generosity of families that host visitors. Although communication remains a barrier since few speak foreign languages in the distant regions of the countries, there is an openness and inclusiveness in Russian society.

While railway passengers in Europe politely smile at fellow travellers before drifting off into their own worlds, one has to take a long journey on the Trans Siberian to get a pulse of Russian culture and how different it is.

During a conversation with a new Danish friend, I was asked whether I was still in touch with my family! In Russia, such a question would most likely have been viewed with the same absurdity as in many Asian countries. Strong familial ties are the bedrock of Russian society, and this is even more so away from the two largest cities in the country. Some may argue that family relations were strong by force since in many cases, people had no choice but to live with their extended family on account of housing shortages. If that were the case, in these days of mortgages and housing loan debt, there would have been a marked change in societal values, which is clearly not visible.

Another strong Asian element in Russia can be seen in the religious revival in the country. After religion was suppressed for several decades by the communists, the return to traditional faiths in the country are visible. This doesn’t mean that churches are overflowing with regular parishioners but more people are looking for answers from the divine. The religion debate is endless, but even as a non-religious person, I can safely say that there is a great degree of spiritual energy in some of Russia’s older churches and monasteries. They don’t feel like mere tourist attractions, the way a large number of houses of prayers in Europe do.

In many ways, Russia will always be the land between Europe and Asia, a country that has combined the influences of both continents and created a unique culture that is similar and different from both at the same time.

Common space from Lisbon to the Pacific

The country can be a natural bridge between the two great continents. The minds and hearts of the Russian authorities are in the right place when they talk about a Eurasian Union and a common economic space between Lisbon and Vladivostok. Those who are sceptical of a union involving Russia and Central Asian countries need to think of the alternative for those newly independent states. How many in Europe would want a greater Middle Eastern influence in those countries? Would anyone want to see more Afghanistans in the making in the relatively stable steppes of Central Asia?

One can only hope that the political problems of the day are solved in Europe so that the utopian concept of a borderless world may one day actually become a reality.  As the European Union has shown from within, cooperation and compromise trumps war.