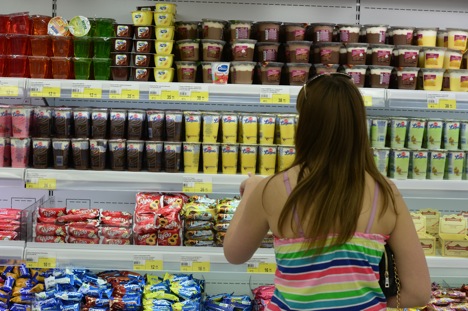 In the wake of Russia’s one-year ban on imports of food products that imposed sanctions on Russia, India could become a major exporter of buffalo meat, processed food and dairy products to the country.

The years following the 1998 financial crisis and subsequent Russian debt default presented one of the best opportunities for exporters of Indian agricultural produce to enter the Russian market.  A lack of interest, information and prevalence of stereotypes about Russia kept Indian exporters from entering Russia. It was precisely around that time the Europeans, Americans and even the Chinese moved back in and completely captured the Russian market.

A visit to any supermarket in a Russian city will show how much the country depends on imported food. One would be hard pressed to find anything of Indian origin besides certain spices and tea. The Russian government’s decision to ban fruit, vegetables, meat, fish, milk and dairy imports from the U.S. the European Union, Australia, Canada and other countries that have imposed sanctions on Moscow, is a great opportunity for Indian exporters to enter the Russian food market.

According to India’s Agricultural and Processed Food Products Export Development Authority (APEDA), buffalo meat exports amounted to $4.3 billion in the 2013-14. India houses almost 60 percent of the world’s buffalo population, and the animal is not considered sacred unlike cows, making it the ideal beef substitute. There were some concerns in Russia about the conditions that buffalo grazed in India, but Indian buffalo meat has been exported to countries like Malaysia, Mauritius and the Seychelles, which have had no outbreak of foot-and-mouth disease.  Russian agriculture and veterinary sanitation inspectors should be invited to India to inspect the conditions for themselves. This should help address their concerns about buffalo meat exported from India.

India needed to play hardball to get the Russian ban on egg products and non-basmati rice lifted last year, but given the fact that one of Russia’s top priorities is to control food inflation, it is unlikely that Moscow will go beyond demanding its normal sanitary standards when dealing with New Delhi over the import of meat and poultry products.

There’s also a great opportunity for one of India’s biggest success stories, Amul, to get a presence in Russia. The serious shortfall in dairy and cheese products means, the Indian cooperative can at least manage to get a small presence in Russia. India exported $540 million worth of dairy products in the last financial year according to APEDA figures.

Indian exporters of agricultural consumer products would be well served to get in touch with Moscow’s small but knowledgeable Indian Diaspora.  Many members of the Indian community in the Russian capital have cut their teeth and have a great degree of expertise about the complex market.  For Indian food products to do well in Russia, a combination of good marketing and attractive packaging is a must along with quality products.

One of the great success stories in Russia is the Sri Lankan tea industry, which came out of nowhere and captured the market, which was dominated by India for decades. Brands like Dilmah are a household name in Russia and Mlesna tea centres can be found in the GUM department store as well as Moscow’s Domodedovo airport.

Of course, it’s not just Indian exporters of agricultural products that stand to gain from strained ties between Russia and the West. The Mint reported that India’s Commerce Ministry has worked out a strategy to export 24 items that Russia usually buys from the U.S. and European Union. These include optics, electrical machinery, pharmaceuticals and plastics, according to the paper.

Now that Russia has decided to bypass sanctions on Iran and signed a MoU to intensify economic cooperation, India along with the two countries can push for marked progress on the North-South Transport corridor.

The corridor project envisages a ship, rail and road route that connects ports on India's west coast to Bandar Abbas in Iran, then overland to Bandar Anzali port on the Caspian Sea and through former Soviet republics right up to Russia. The route could via either Armenia and Georgia or the more practical option of Azerbaijan and Kazakhstan.

An inter-governmental agreement on the corridor was signed between Russia, Iran, India and Oman, back in 2001, but there has been very little progress in making it functional. Now more than ever, Russia needs to push for all the railway connections to be built at a rapid rate to make the corridor functional.

This functioning of the corridor would also open Russia and many former Soviet states to India’s fruit and vegetable exporters in years when India has a bumper crop.

It is not clear how long Russia’s impasse with the West will last, but this is as good a time as any for Indian businesses to rediscover a country that was one of India’s biggest trade partners in the 1970s and 80s.